Hot off the press cannabis, marijuana, cbd and hemp news from around the world on the WeedLife News Network.
2 minutes reading time (496 words) 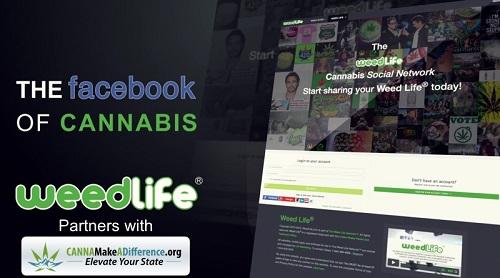 Community engagement is a challenge for Cannabis Companies, but it happens and most don’t even know it occurs.

Denver (April 18th, 2018) – WeedLife.com, a cannabis social network in the rapidly expanding legal cannabis industry, is the presenting sponsor of the 2018 CannaMakeADifference Nonprofit Pavilion at the Mile High 420 Festival in Denver Colorado this Friday, April 20th. WeedLife.com is supporting the newly coordinated event this year which includes a focus on the cannabis culture’s connection to their communities.

“We’ve spent the past five years providing online cannabis consumers and businesses worldwide a social network they can connect, share and learn from one another on, so the industry can grow even faster.” says WeedLife.com co-founder Ken Tapp. “Our goal as the presenting sponsor of the charity pavilion at the 2018 Mile High 420 Festival in Denver Colorado is to shine a spotlight on the many people and charities this industry continues to support here in Colorado.”

WeedLife.com has teamed up with CannaMakeADifference.org in 2018, to help link Cannabis Companies with Nonprofits in Colorado, and throughout the United States, using the WeedLife.com social network to educate millions of online consumer and business users on how they can help the many charities in need that CannaMakeADifference supports.

“People assume cannabis companies give because of the tax write off. However, they cannot write off any donation due to the 280E law. If I want to know how much giving is going on in an industry, most of that data is widely found in IRS records due to tax writeoffs. However, with cannabis companies, that information is not public, yet we know cannabis companies are donating and volunteering in our communities. That needs to be public.” says Kevin J White, founder of CannaMakeADifference, a company dedicated to educating and connecting both cannabis companies and nonprofits. “We appreciate companies like WeedLife.com helping us to get the word out.”

WeedLife.com is a division of Social Life Network, Inc., an American for-profit corporation and an online social networking company, based in Denver Colorado.

CannaMakeADifference.org is the first online platform in development which connects cannabis companies looking to engage with their community with nonprofits willing to accept money and other forms of support from the cannabis industry.

More can be found at http://www.CannaMakeADifference.org