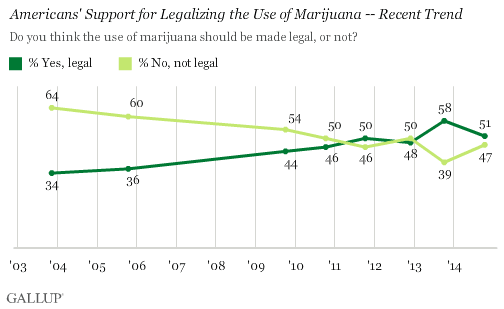 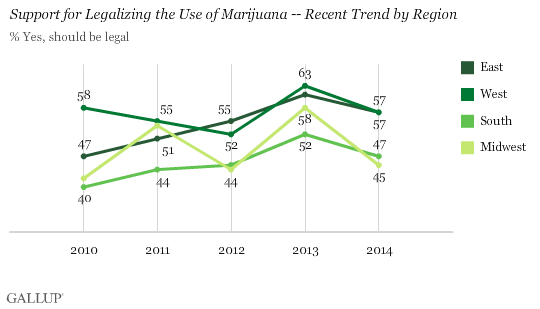 ~
The new result is based on an Oct. 12-15 Gallup poll, conducted in the run-up to the midterm elections in which various pro-marijuana policy initiatives went before voters in Oregon, Washington, D.C and Florida, as well as in several cities in Maine, Michigan and elsewhere. Most of those initiatives succeeded, although a proposed Constitutional amendment in Florida to legalize medical marijuana failed with 57% of the vote, just shy of the 60% needed.
Gallup's long-term trend on Americans' support for legalizing marijuana (the full trend is available here) shows that in 1969, just 12% of U.S. adults were in favor. But that swelled to 28% by the late 1970s, and 34% by 2003. Since then, support steadily increased to the point that 50% supported it in 2011. Last year was the first time Gallup found a solid majority in favor, at 58%. That poll was conducted amid heavy news coverage of the imminent implementation of Colorado's marijuana legalization law, which may have contributed to what appears to have been a temporary jump in support. This year, support at 51% is still a majority, but closer to where it was in 2011 and 2012.

Gallup's trend data also makes it clear that legalizing marijuana remains a much easier task in certain places than others. Chiefly, in contrast to high levels of support among liberals and solid support among moderates, less than a third of conservative Americans think marijuana should be legal. As a result, such measures are likely to be more viable in relatively liberal locales, including in Oregon and Washington, D.C., where they have already succeeded, than in conservative bastions like Wyoming, Utah or Arkansas.
This pattern is echoed in the results by party ID, with the same implications about the outlook for marijuana legalization being tied to a state's partisan makeup. Currently, 64% of Americans who identify as or lean Democratic side with legalization, compared with 39% of Republicans.
And in accordance with the regional distribution of red and blue states, with most of the blue -- heavily Democratic -- states clustered on the coasts, and most of the red -- Republican-oriented -- states concentrated in the middle and southern regions of the country, Gallup finds a solid majority supporting legalization of marijuana in the East and West, while in 2014, fewer than half support it in the South and Midwest.

Public support for legalizing the use of marijuana has clearly increased over the past decade. The question now is whether the momentum will continue to build or level off at a bare majority supporting it.
Last year's finding of 58% in favor was recorded as Colorado was preparing to become the first state to implement a law decriminalizing the use of small amounts of marijuana for recreational use. Although the law passed in November 2012, it did not go into effect until January 2014. Americans may have warmed some to proponents' arguments in 2013 in the ongoing discussion around the Colorado law. More recently, Colorado has been in the news over the sale of marijuana-infused edibles -- everything from brownies to gummy bears -- and the risk they pose to children, possibly sparking public concern. Also, a year ago, proponents in California were poised to launch a ballot initiative for 2014 to legalize marijuana in the Golden State, adding to the sense of momentum for legalization, but later decided to wait until 2016 for fear of losing at the polls, as they did in 2010. The relative lack of attention to new legalization initiatives throughout 2014 may have caused public support to subside.
As long as support hovers around the 50% mark, it will be difficult for proponents to promote legalization beyond the more Democratic and liberal-oriented states. The South and Midwest are likely to remain less hospitable, at least for the time being. But with a super-majority of younger Americans supportive -- 64% of those aged 18 to 34, contrasted with 41% of those 55 and older -- it seems inevitable that this will eventually change.

Results for this Gallup poll are based on telephone interviews conducted Oct. 12-15, 2014, with a random sample of 1,017 adults, aged 18 and older, living in all 50 U.S. states and the District of Columbia. For results based on the total sample of national adults, the margin of sampling error is ±4 percentage points at the 95% confidence level.
Each sample of national adults includes a minimum quota of 50% cellphone respondents and 50% landline respondents, with additional minimum quotas by time zone within region. Landline and cellular telephone numbers are selected using random-digit-dial methods.
View complete question responses and trends
~
Tags:
WeedWorthy Marijuana Legalization News, WeedWorthy US News, Lydia Saad,
Michigan marijuana legalization advocates confirm ...
Marijuana Legalization In Ohio Could Raise $554M I...