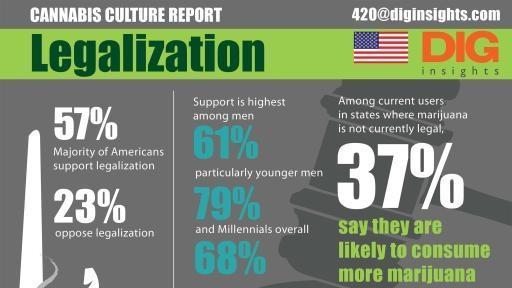 Toronto, ON – Just in time for 4/20 or World Cannabis Day, DIG Insights, a leading global research firm, has released its Cannabis Culture Report, an extensive research initiative on marijuana use in North America encompassing public attitudes on usage, legalization and much more.

Legalization:
The majority of Americans (57%) support legalization, and support is highest among men (61%), particularly younger men (79%), and Millennials overall (68%). Among current users in states where marijuana is not currently legal, 37% say they are likely to consume more marijuana after it’s legalized.

Only 16% of Americans believe Marijuana is “very harmful”, which is lower than alcohol (27%), processed sugar (23%) and saturated fat (33%). A majority (51%) believes consumption can be beneficial, while only 32% believe that regular users are less successful in life. However, 25% report having a close friend or family member whose life was negatively affected by marijuana.

Tags:
Marijuana News
Cannabis activists plan smoking protest on steps o...
4/20 TV: A Guide of What to Watch on Marijuana’s B...