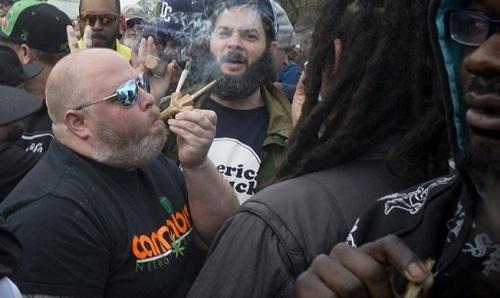 The 4/24 event calls on Congress to federally legalize marijuana and allow the District to fully enact its 2014 ballot measure.

WASHINGTON – Dozens of activists, including some military veterans, plan to light joints Monday on the steps of the U.S. Capitol – federal land where committing the offense could draw a sentence of up to a year in jail – as part of an effort to urge a reluctant Congress to support marijuana legalization.

“Monday @ High Noon” reads a flier for the event, calling on Congress to also remove marijuana from the nation’s list of most-dangerous drugs.

“Mass Civil Disobedience @ 4:20p – East Side of the US Capitol.” Activists for the cause have flirted with arrest before, including smoking near the White House when President Barack Obama was in office.

Study: Compound in marijuana seems to help with se...
Groundbreaking Study On Marijuana Use Coincides Wi...