The State of Cannabis in Colorado

It is fair to say the legal cannabis industry has exploded over the past two decades, ever since the state of California got the ball rolling in 1996 by legalizing medical cannabis, followed quickly by Colorado.

Since then, we’ve seen a total of 36 states, the District of Columbia, Guam, Puerto Rico, and the U.S. Virgin Islands all approve comprehensive, fully legal medical cannabis programs.

Colorado was one of the first states to decriminalize cannabis in 1975, then establish legal medical and recreational cannabis programs in 2000 and 2012.

As the nation’s first legal retail market, Colorado has made itself a hub for legal cannabis in both the U.S. and the world, with some of the most influential, creative, and innovative cannabis brands and entrepreneurs residing there.

The legalized cannabis industry has generated hundreds of millions of dollars a year for Colorado. That’s a massive industry for most small countries, let alone a state with a population of 5.8 million. 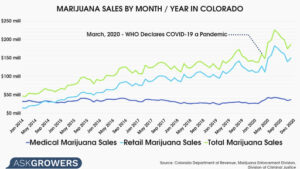 As you can see from the graphic above, medical cannabis numbers have been consistent for the last six years.

According to the Marijuana Policy Project, the state of Colorado only has about 81,000 registered medical patients. That’s about one and a half percent of the state’s total population.

In 2020, the Colorado Department of Revenue reported a record-breaking year for cannabis sales, almost $2.2 billion.

The ongoing global pandemic is a primary reason for the increase in recreational sales.

There was a massive spike in legal cannabis purchases coinciding with the WHO declaring COVID-19 a pandemic.

That spike makes a lot of sense for a few reasons. First, there was a ton of uncertainty surrounding which businesses would stay open amid the lockdowns. It makes sense for those who enjoy or rely on cannabis to stock up while they could.

Secondly, the spike in sales may be attributed to the stress-reducing, sleep-aiding properties of cannabis.

The lockdowns worldwide were a stressful time for many, with social isolation, stresses around unemployment, and general worry-based anxiety symptoms wreaking havoc on people’s mental health. It only makes sense that some would turn to cannabis to help cope.

According to the ACLU, in Colorado, Black people are 1.9 times more likely than white people to be arrested for marijuana possession even though only 5% of the population is Black. 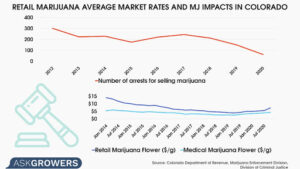 Rise of Concentrates and Edibles

As the legal cannabis industry has matured and changed, so have the methods and forms of cannabis people choose to consume.

After all, it’s not 1960 anymore. There are way more options for consuming cannabis.

For Colorado cannabis consumers, concentrates and edibles have slowly but surely become the preferred way of consuming cannabis.

When it comes to getting the most bang for your buck with THC content, concentrates are hard to beat.

Meanwhile, it’s no surprise that flower sales have slumped. Buying cannabis flower can often be expensive.

The flower itself is challenging to carry and store safely. A few drops from a tincture or drags from a disposable pen sounds easier than processing, grinding, and smoking flower.

It’s also worth noting that many cannabis users might be trying to cut back on their smoking due to health concerns associated with COVID-19. 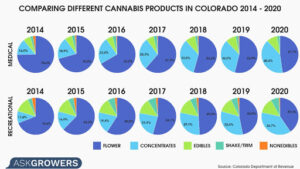 Colorado is a textbook example of why so many U.S. states, especially after having their budgets impacted by COVID-19, are looking to legalize cannabis.

When you look at the numbers, it’s clear why so many states are looking at a revenue-generating industry like cannabis. 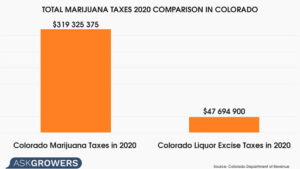 Colorado businesses raked in nearly $2.2 billion in profits last year, collecting $319,325,375 for the state in the process.

That’s thanks to Colorado’s 2.9% sales tax from both medical and recreational marijuana sales and a 15% excise tax on retail marijuana.

Of the total revenue, 66% comes from the state’s 15% retail excise tax, and 90% of this subtotal is reserved for the general fund.

Local governments are given the remaining 10%. The money collected from cannabis sales taxes is set to be appropriated to local governments and the state’s education, transportation, and marijuana cash tax funds.

When you compare that massive amount of money to how much that state makes from alcohol sales, it’s clear that there’s no comparison to be made.

On top of being a fantastic money-maker for the state and local governments, the legal cannabis industry is also a job creator. 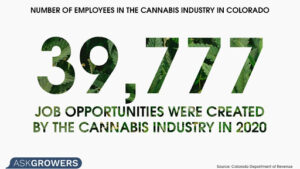 The future of Colorado’s cannabis market will determine job growth and tax revenue for years to come.

Other states are looking at Colorado as a model for their own cannabis programs.

These investigations will lead to other states legalizing, and eventually U.S. federal legalization.

“The fact that cannabis is still saddled with a Schedule I drug classification is kind of mind-blowing. Keeping cannabis federally illegal just does not make any sense at this point.

It really hurts the small cannabis businesses that struggle to stay afloat with unnecessarily harsh regulations.

This is despite the heavy taxes the industry pays to local and state governments,” said Patrick and Jamie Stephenson of Newt Brothers, an artisanal cannabis company based in Denver.

“There has been real progress in the industry in the last ten years of legalization, and related research has uncovered previously unknown benefits from cannabis. But now it’s time to provide access to cannabis globally, just like alcohol.”

Cait Curley, a Colorado-based cannabis-industry influencer and entrepreneur, is of the same opinion. “The current state of cannabis being federally illegal is the biggest challenge [for the industry itself]. I think the speaking engagements outside of the cannabis industry have a larger impact when it comes to pushing legislation. It’s important for me to keep things simple, calm, and to the point,” said Curley.

“Education is so vital. Giving people valuable information on why cannabis is illegal and what legalization could do for our planet and people is crucial in the attempt to evolve their mindset. Speaking to the choir/industry at an event about a specific bill can also be beneficial to get everyone on the same page.”

Swedish hemp imports signal potential for domestic...
Do Cannabis Products Over Promise And Under Delive...