With an unexpectedly close 19-17 vote, the Senate passed legislation early Tuesday that would legalize recreational marijuana in Connecticut, sending the bill to a closely divided House of Representatives on the penultimate day of the legislature’s 2021 session.

It was unclear if the House had the votes, time or inclination to attempt final passage before the constitutional deadline of midnight Wednesday, a task that grew more difficult Monday with concerns over attempted favoritism on licensing growers.

“We’ll make the time,” said House Majority Leader Jason Rojas, D-East Hartford, who led the working group that produced the bill and watched the denouement of an oddly tense and protracted vote in the Senate.

Only the vote cast by a retired police officer, Sen. Kevin Witkos, R-Canton, saved the Senate from needing Lt. Gov. Susan Bysiewicz to break a tie. Six Democrats voted with the other 11 Republicans in opposition.

But for 11 minutes after the debate ended and voting began, passage was unclear. The tally was 16-16, with four Democrats missing: Steve Cassano of Manchester, Douglas McCrory of Hartford, Patricia Billie Miller of Stamford and Marilyn Moore of Bridgeport.

Moore voted yes, making the tally 17-16 after nearly eight minutes. McCrory, who was furious at the Senate for striking a provision he wanted, cast a yes vote three minutes later, pushing the vote to 18-16 in favor. Miller, who said she long had been opposed to legalization, cast the 19th yes vote. The victory assured, Cassano cast a final no vote.

“I was still contemplating it at the end,” Miller said.

The overnight debate reflected familiar arguments of past years, with fears of legalization leading to abuse and addiction weighed against the legacy of a discredited war on drugs that fell most heavily on urban Black communities.

McCrory, Miller and Moore are members of the Black and Puerto Rican Caucus that pressed for social equity provisions that direct the majority of cannabis revenue into the cities most affected by the enforcement of drug laws.

“This is legislation that is 88 years overdue,” said Senate President Pro Tem Martin M. Looney, D-New Haven, referring to the end of the prohibition of alcohol in 1933.

“If you go back to the beginning of the last century, you could find cannabis in drug stores,” said Sen. Gary Winfield, D-New Haven, co-chair of the Judiciary Committee and a lead sponsor. “Then, things changed.”

That change, Winfield said, was a perspective on marijuana that was tinged with prejudice, as people viewed the drug disparagingly because they associated it with Mexican immigrants, with Black people, or with counter-culture hippies.

The war on drugs that began in the 1970s with President Richard Nixon’s administration and continued for several more decades became, in some ways, a way to target racial minorities. “Whole communities have been decimated,” Winfield said. 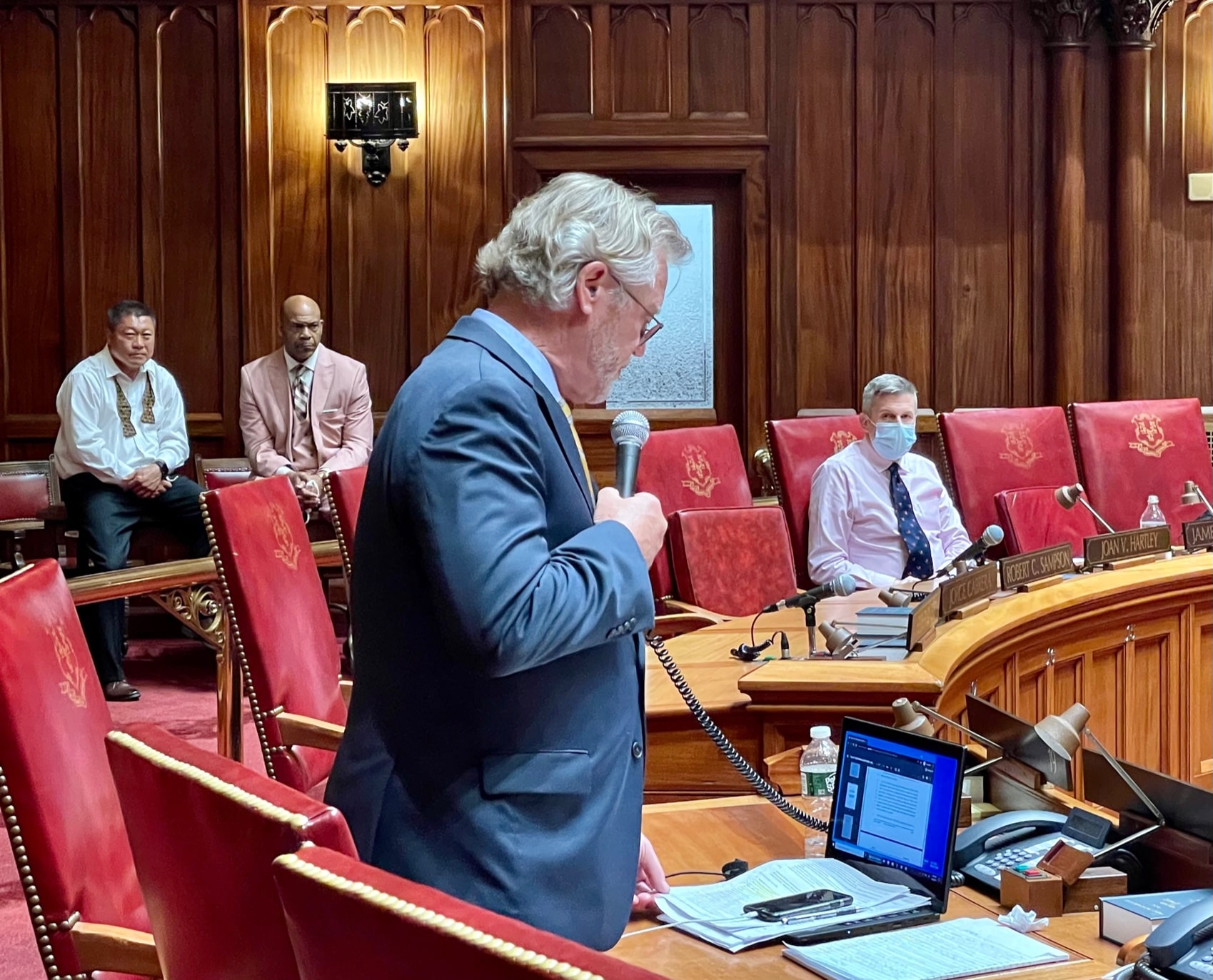 From left, Sens. Tony Hwang and Doug McCrory listen to Paul Formica talk about his own struggle with addiction.

Sen. John Kissel, R-Enfield, said he was less concerned about history than present health threats, particularly to youths. He noted that the cannabis debate opened shortly after the Senate gave final approval to a pilot program to serve individuals with opioid use disorder.

Gov. Ned Lamont recently signed a law legalizing sports betting, and he supports the legalization of marijuana. Eighteen other states have legal weed, including Massachusetts and New York.

Other opponents shared personal stories of addiction and their fears of what legal cannabis might bring.

“As somebody who grew up the daughter of an alcoholic and was surrounded by addicts all my life, I know all too well the impacts of drug and alcohol abuse,” said Sen. Christine Cohen, D-Guilford. “It tears families apart, it changes the lives of users and everyone who touches them.”

Sen. Paul Formica, R-East Lyme, called himself an addict from ages 13 to 28, abusing liquor, marijuana and “other things.”

But Senate Majority Leader Bob Duff, D-Norwalk, said regulating and taxing the sale of legal marijuana was preferable to ignoring the black market.

Retail sale of marijuana is not expected until May 2022. Homegrown marijuana would be allowed for holders of medical marijuana cards on Oct. 1, 2022 and to others in July 2023.

The bill would automatically erase some drug convictions and create a petition process to expunge others.

Half of the initial licenses for growers and retailers would be reserved for social equity applicants, defined in the bill as a business with at least a 65% ownership by someone of limited income and a resident of an area disproportionately impacted by drug enforcement.

A 15-person Social Equity Council would set rules for social equity applicants and review their applications.

The state would create two lotteries for licenses, the first only for social equity applicants. Licenses will cost $3 million. For the same fee, a medical marijuana producer could become a recreational supplier.

The bill was hastily rewritten Monday night to strike language that would have given preference for a cultivation license to at least one former medical marijuana investor if he partnered with an urban applicant lacking expertise and capital.

The language was sought by McCrory, who said his intention was to match an experienced and deep-pocketed player with a social equity applicant.

The fee to enter the lottery for a production license is $1,000. Winners would then have to pay $3 million for a license.

The bill includes a “labor peace agreement” requiring licenses to be open to unionization. A Republican amendment to strip the provision failed on a party-line vote.

Sen. Dan Champagne, R-Vernon, who spent 22 years as a police officer, said legalizing the sale and use of marijuana will boost the illegal market, not undermine it.

He said the provisions allowing individuals to have up to 1.5 ounces of marijuana plant material on their person and up to 5 ounces locked in a car trunk or glove box will help traffickers transport the product.

Witkos, the former officer who voted for the bill, did not speak during the debate and was not available at its conclusion.

The Democrats who voted against the bill were Cassano, Cohen, Saud Anwar of South Windsor, Dennis Bradley of Bridgeport, Joan Hartley of Waterbury and Alex Kasser of Greenwich.

Americans Are Consuming More Cannabis Than These P...
CBD and THC: What You Need To Know