It’s been nearly three years since the first medical marijuana dispensary opened in Ohio and a little more than half of the state’s marijuana card holders are either “extremely dissatisfied” or “somewhat dissatisfied” with the program.

That’s just one of the results of a recent report prepared by the Drug Enforcement and Policy Center at Ohio State University’s Moritz College of Law, which supports and promotes research, education and public engagement on topics surrounding drug policy and enforcement and tracks the state’s medicinal cannabis program.
The high price of marijuana in Ohio dispensaries was the top reason for their continued dissatisfaction, for not using licensed dispensaries and for opting out of using medical marijuana, according to the 1,326 patients responding to survey questions.
The price of marijuana in Ohio, continues to be considerably higher than in neighboring Michigan. Through the first half of 2021 the per-gram price of marijuana in Ohio was 44% more expensive than in Michigan. It’s also significantly lower than in Pennsylvania, according to the report. 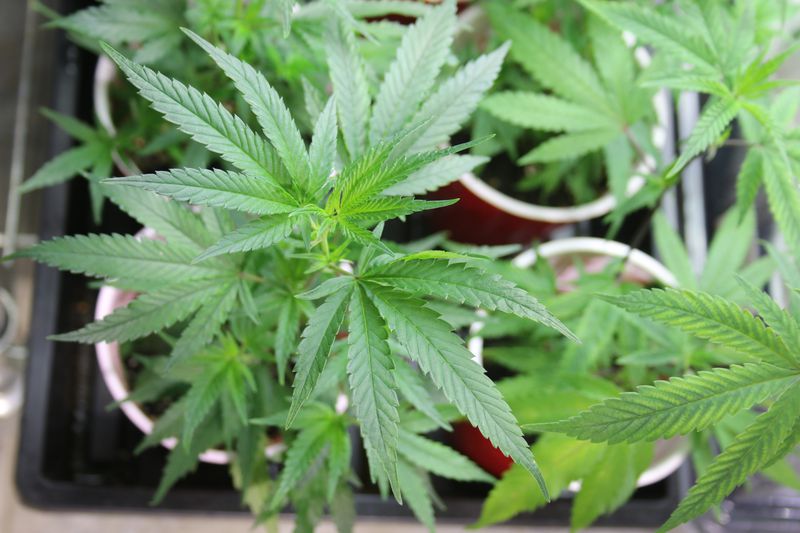 “We follow the economic trends because you don’t want (the price) to be too low or too high, so there’s a median that has been set by the industry,” said Ariane Kirkpatrick, CEO of Harvest of OH, which opened a new 2,936-square-foot medical marijuana dispensary last week in Beavercreek. “Everybody’s selling pretty much at the same price, all of the locations. There’s no price-gauging by any individual owners.”

There’s also an understanding among owners to not undersell it “just so they can get all the sales,” Kirkpatrick said.

“That happens in other industries, but I think there’s a respect among all of the owners to sell for what the going rate is, she said.
The price of plant product in Ohio dispensaries actually has decreased since the beginning of 2019, when it started at around $17 per gram, according to the survey report. Yet the price has not fluctuated much since January 2020, “hovering mostly between $10 and $11 per gram despite an increase in the number of cultivators and dispensaries.”

The price of medical marijuana may appear to be high because insurance does not cover it, according to Matt Close, executive director for the Ohio Medical Cannabis Industry Association. That should change as compliance and regulatory burdens are addressed and as the market matures, he said.

Another reason for dissatisfaction mentioned by patients via the survey was a lack of home grow options in the state.

Kirkpatrick said that should be addressed via a bill introduced earlier this year by state Reps. Casey Weinstein (D-Hudson) and Terrence Upchurch (D-Cleveland), one that would legalize the recreational use of marijuana in Ohio. The legislation would allow for adult cultivation and possession of marijuana.

“I don’t see that as a threat (to the industry) at all,” Kirkpatrick said. “I see it more as ... something that’s needed in terms of accessibility for patients.”

Due to program delays, the first Ohio sales of medical marijuana at a licensed dispensary did not occur until January 2019, Jana Hrdinova, the administrative director of the Drug Enforcement and Policy center, said in the report addressing survey results.

“Since then, OMMCP has experienced a steep growth in the number of patients and the amount of cannabis flower and manufactured units sold,” Hrdinova said in the report.

OMMCP also has wrestled with “persistent levels of dissatisfaction among patients and potential patients,” the report said.

“We’re happy that the dissatisfaction rate is going down, but we’re going to work with the (state) legislature this fall to get a bill going that corrects a lot of the issues that came about five years ago when the bill (to DO WHAT) passed, and hopefully continue to make things better for patients and businesses alike,” said OMCIA’s Close.

“Five years later, it’s time to address some of the regulatory issues that the industry faces, which in turn will hopefully drive prices down and satisfy patients more,” Close said.

One of the things that OMCIA is seeking to address is “some of the bureaucracy in the program,” including consolidating the program, which is housed under one agency and two boards, he said.

“We would like to streamline that process and that’s what the bill would reflect,” Close said.

Patients expressed dissatisfaction with the restrictions on patient supply, the difficulty and cost of obtaining a patient registration card, and the fact that certain medical conditions, such as anxiety and depression, were not recognized as qualifying conditions, according to the report. For those who indicated that they purchased marijuana from other sources, the main reason for doing so was the cost of product in Ohio dispensaries and the cost and difficulty associated with becoming a registered patient.

The survey didn’t only express dissatisfaction with the industry.

Changes inspired by COVID-19, including the increasing use of telemedicine, online ordering and curbside pick-up, which have had a positive impact on patients’ satisfaction levels with OMMCP, according to the report. Participants also reported high levels of trust in the safety of products sold in licensed dispensaries.

A considerable 81% of respondents reported trusting the safety of products sold in Ohio dispensaries. Just 8% reported not having trust in the safety of dispensary products.

Lastly, while close to 89% of respondents reported that they would prefer to purchase their marijuana from medical dispensaries if prices were similar to other sources, just 72% of respondents with a qualifying medical condition reported using Ohio licensed dispensaries as their primary source of medical marijuana.

Meet Jeng, The Alcohol-Free, Hemp-Infused Beverage...
Will US Grown Marijuana Even Exist In 10 Years?