How To Avoid Going To The Emergency Room For Marijuana Overdose

It’s possible for a weed-consuming population to use marijuana without needing emergency medical assistance. Here’s how.

It seems that every time a state officially launches its legal cannabis market, reports showing that emergency rooms are filling up with people who can’t handle their weed start to bombard the internet. This took place earlier this year throughout Illinois, which rolled out its taxed and regulated pot trade in January. In Chicago, doctors claimed an increase in ER visits due to people overdosing on weed.

Listen, this madness might be happening, or it might not. The purpose of this article is not to debate whether legal marijuana brings about an uprising in freakouts that send people on a mad dash for the hospital. It is to serve as a guide, of sorts, intended to prevent these horrific events from happening in the first place. Because, get this, it is possible for a weed-consuming population to use marijuana without needing emergency medical assistance. It’s a novel concept, we know. But we swear that people can use cannabis products safely and responsibly.

The first thing to consider is this: Any report that comes out in the media suggesting that people are running to the ER because the weed got on top of them can almost always be attributed to edibles. We’re not going to lie, these popular pot products sold in dispensaries in states where marijuana is legal can be tricky and the source of great misery if they are not consumed correctly.

We’ve seen these things turn grown men into crying globs of slobber and regret, curled up in the fetal position, begging for someone to call 911 or bring them an oxygen tank. If you’ve never taken too much THC, there is no possible way to understand the intense anxiety that it brings. It can make breathing extremely difficult and mess with your senses in ways that are just plain scary. But there is no need for a person to go down this road if they don’t have to.

Avoiding a panic moment is as easy as understanding dosage and timing. But that alone can be difficult enough to put cannabis newbies in a bad situation. Unlike smoking marijuana, which comes with an instant buzz, pot edibles can take a while to kick in. It’s nothing to be sitting around for an hour waiting to feel the effects.

This is where some people make a tragic mistake. They’re thinking, “Man, these edibles are not doing anything for me,” so they take another dose and maybe another one after that. Then, in a matter of hours, they are as high as they’ve ever been in their lives, and there are no signs of a comedown. So, if there is one piece of advice we can offer for someone trying edibles for the first time, it’s to have some freaking patience.

The other is not to be a hero. Seriously, most of the edible products that can be purchased down at your neighborhood dispensary will come with 100mg of THC. Fair warning, this is not a single dose. Not unless you happen to be an elephant. This much THC has the power to cause a level of panic that you don’t even want to think about. Will it kill you? Well, science says that it won’t. But that doesn’t mean you won’t spend several, long hours utterly convinced that grim death is looming overhead. 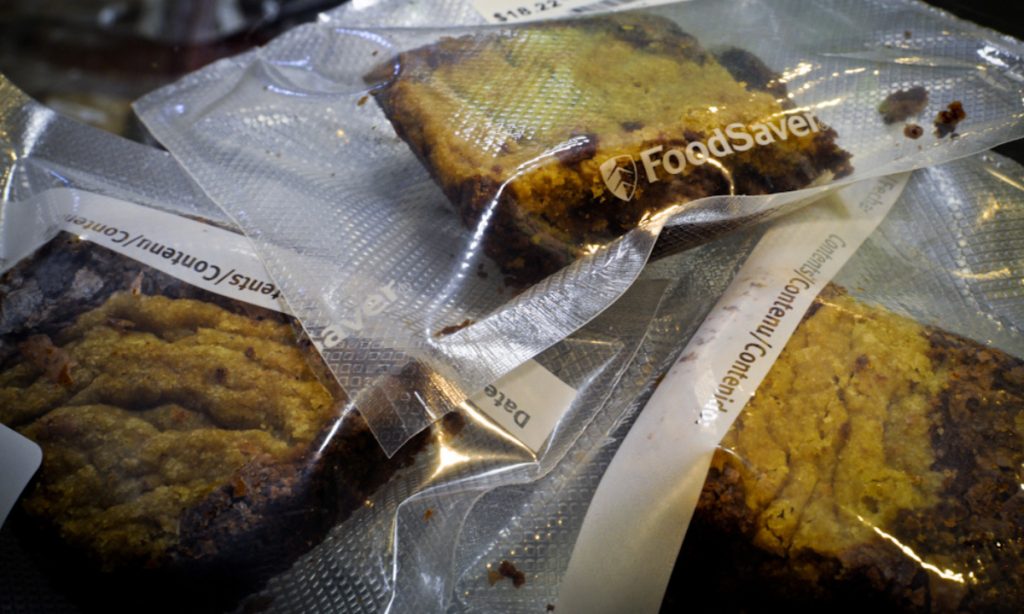 In fact, the fear of dying from a marijuana overdose (note: An overdose doesn’t necessarily mean someone has to die. It just means that they took too much) is the reason so many people storm the doors of an ER. It has been our experience that there is a bit of a learning curve when using edibles. Beginners should probably see how they do on 5mg of THC and go from there. Although budtenders typically tell customers they can start with 10mg, we have found that even this amount can be a little much for some folks.

Just remember, you can always take more if the initial dose isn’t quite doing the trick (give it an hour to do its thing, first). But you cannot back away from a pot overdose once it is on course. There is no Narcan-like reversal for it. You’re just going to have to deal with getting super stoned, paranoid and afraid.

And forget about all of those articles you’ll find on the internet about how to calm down after consuming too much THC. Most of these suggestions will not work on someone who is really ripped up and convinced that their life is about to end. Therefore, it’s probably best not to overdose in the first place. And the only way to avoid it is to start low and slow.

A Huge Way Airports Have Changed Now That Weed Is ...
What Is The Current Legal Status Of Delta 8 THC In...

Should Public Cannabis Consumption Be Allowed?

The Story of Cannabis in Five Essential Strains

California-Grown Cannabis To Be Judged At Next State Fair