“Because I would like to see my people liberated,” entrepreneur Al Harrington recently replied pointedly when asked why he chose the cannabis industry after retiring from professional basketball.

“When you think about the cannabis plant and what it has done to my community, 85 percent of all drug arrests are cannabis-related,” Harrington explained. “Our [white] counterparts are bragging on panels that they paid their way through college by selling weed on campuses, and that they never had any interruptions or issues.

“I’m fighting for the people that are still locked up.”

During this current Black History Month – indeed, year round – black leaders of legal cannabis/CBD organizations are expressing frustration over the numbers of minority men arrested and imprisoned for even minor cannabis offenses. The American Civil Liberties Union in 2020 reported that African Americans were 3.73 times more likely than whites to be arrested for marijuana.

No wonder that black entrepreneurs like Joshua Green and Samuel Adetunji, co-founders of Veriheal, which helps customers obtain medical cannabis cards, cite “legal protection” as their business priority. “I’ve seen friends thrown into jail for just having two grams, having handcuffs put on them,” Adjetunji said in an interview. “Having this [medical] card allows them to legally have this [marijuana] on them.”

This past year, of course, has been one of racial reckoning. And that reckoning has begun to penetrate at the federal level. On Presidents Day, the National Organization for the Reform of Marijuana Laws and advocacy groups formally reminded President Biden of his campaign-era support for decriminalization. “I think everyone – anyone who has a record – should be let out of jail, their records expunged, be completely zeroed out,” Biden said at the time.

Meanwhile, efforts by cannabis companies to offer jobs, training and mentorship to African Americans seem at least some measure of compensation for past racial discrimination in the criminal sector. That’s important,, advocates say, considering that blacks make up a mere 4.3 percent of owners or stakeholders in the industry, according to a survey by Marijuana Business Daily.

“We want people like Corvain Cooper to be able to find themselves in the industry if they want to,” said Khadijah Tribble, vice president of corporate social responsibility for Curaleaf. (Cooper, now free, became a cause célèbre after being sentenced in 2014 to life in prison for a nonviolent marijuana crime.)

In recent interviews Tribble and the other entrepreneurs quoted above elaborated on how they’re putting their “give back” efforts into action this Black History Month, and beyond:

Drafted at age 18,  Harrington went on to play for NBA teams like the Denver Nuggets, the New York Knicks and the Golden State Warriors. Retiring after 16 years, Harrington, now 41, opted for a career in cannabis after suggesting its benefits to his grandmother – the original “Viola” — who at the time suffered from painful glaucoma.

I’m not smoking no reefer!” she declared at first during a visit to her grandson, but relented. “An hour and a half later, I went to check on her,” Harrington recalled. “She was downstairs, crying, reading her Bible. She told me it was the first time she was able to see the words in her Bible in over three years.

“That’s how my [cannabis] journey started,” the entrepreneur said. “It made me read up on the plant and how magnificent it is.”

In 2013 Harrington co-founded Viola Brands, which today has 100 employees in four states, soon to be six. The CEO expects $35 million in revenues this year.

He’s just as enthusiastic about his nonprofit Viola Cares’ efforts in the black community. There are food drives for the homeless and turkey giveaways but Harrington’s priority is an incubator which trains cannabis-wannabes in skills ranging from mastering the metric system to shadowing cultivation experts.

This all happens through Los Angeles’s social equity program, which sets aside cannabis licenses for people of color who otherwise would lack the funding, never mind the real estate, required. “You have to live in a zip code disproportionally affected [by the war on drugs], or if you were incarcerated for a drug conviction,” Harrington said of the application process.

To date, Viola Cares has contributed $500,000 to social equity. Fifty mentees have graduated from the incubator and 36 have been pre-vetted for licenses. Six have actually gotten the licenses; four will be operating retail operations within three months, Harrington said.

On the profit side, meanwhile, Harrington invests in topicals and edibles. He’s working with the NBA to allow players to use cannabis for pain and anxiety in place of often destructive alcohol and prescription drugs.

“At the end of the day, the incubator is all about using the Viola platform to uplift, educate and empower people of color,” Harrington said. “In the cannabis space, we felt like if we don’t do it, it will never get done. So, after all the harm that the war on drugs did, particularly [against] the black community, we deserve a seat at the table.” 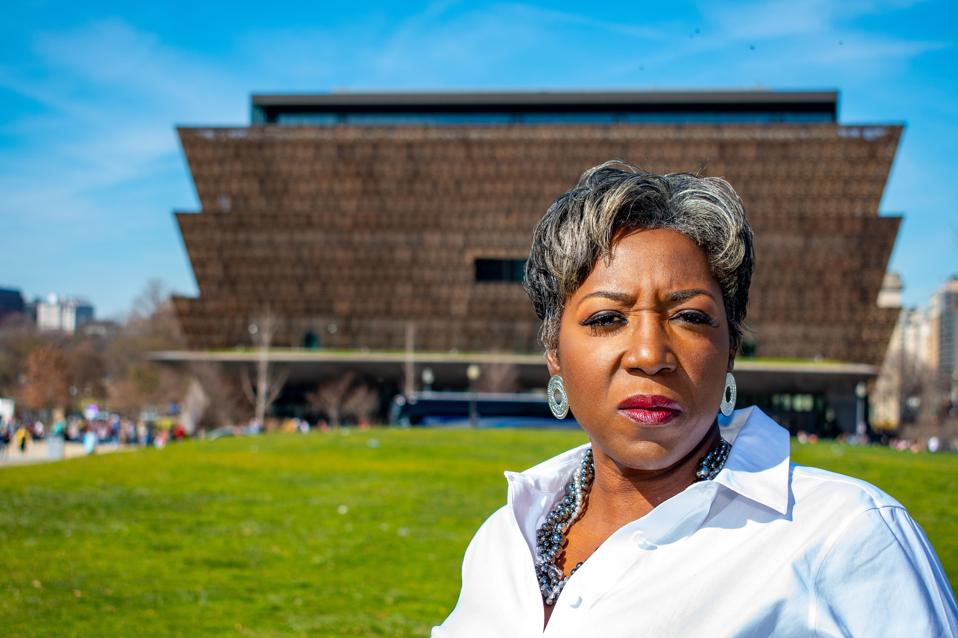 Vice president of corporate social responsibility for Curaleaf Khadijah Tribble understands "at a ... [+]

The cannabis company Curaleaf is accepting applications until Feb. 22 for its executive Roundtable protégé program, in which would-be cannabis entrepreneurs can find mentors among Curaleaf leaders, and education and networking with industry experts.

The point is “increasing industry representation from individuals from communities traditionally disadvantaged by the war on drugs,” says Curaleaf’s website, describing what seems a passion project for Khadijah Tribble, 49, VP of CSR for the company.

“The [protégé program] is one response to the issue of providing opportunity,” Tribble said in an interview this week. “A second one which I’m really excited about is the commitment that 10 percent of our hires this year will come from communities that have been disproportionately harmed by the war on drugs – with a particular focus on individuals formerly incarcerated.”

These issues are personal for Tribble whose son was convicted for marijuana distribution. She knows well from her years leading the political consulting firm Ground Games how just one mistake like his can wreck applicants’ chances for jobs for years after.

She remembers how she herself negatively viewed applicants who’d checked “the box” on job applications asking about past felony convictions. She says she came to understand “why the process of what I was doing was very harmful to various communities I care a great deal about.” With this understanding, she became active in the “Ban the Box” movement.

Other efforts included founding the advocacy incubator Marijuana Matters, back when she was pursuing a master’s degree in public policy at the Harvard Kennedy School. As a board member with the reentry program Changing Perceptions, Tribble said, she became “intimately involved in an understanding of collateral consequences” resulting from prison sentences that never should have happe33ned.

Today, after a year at Curaleaf, which has wholesale accounts with 1,150 dispensaries and an annual revenue of around $1 billion, Tribble is working through the company’s Rooted in Good program to advance social equity, environmental sustainability, diversity and inclusion.

Food insecurity assistance and opportunities for future cannabis entrepreneurs from disadvantaged communities are key. Tribble especially wants to erase “discrepancies” at the federal level that hobble national job-opportunity expansion due to marijuana’s continued illegality at the federal level. “We’ve made that commitment and we’re going to figure out a way to make that happen,” Tribble said. “To realize those opportunities we need partners in government as well.” 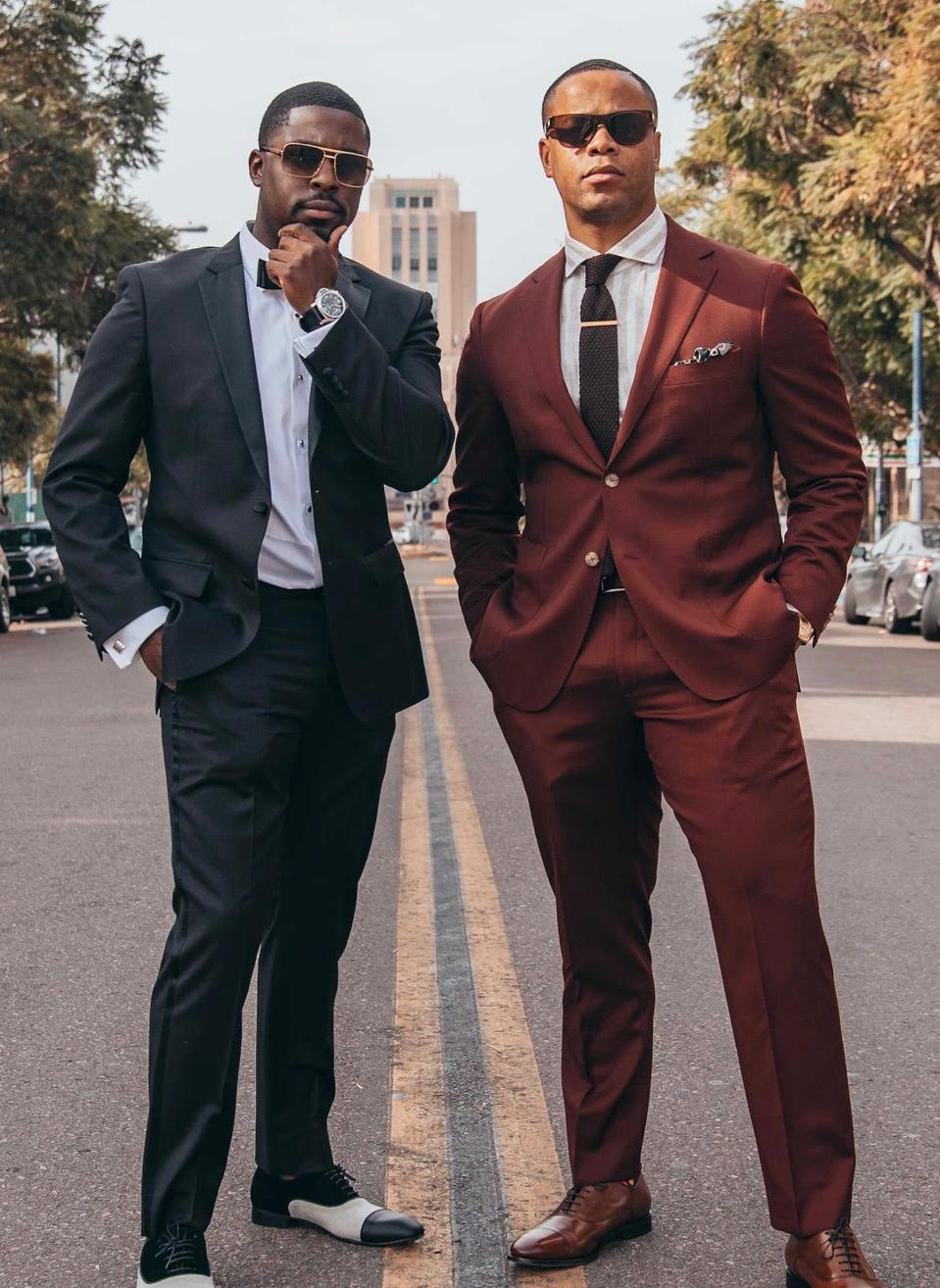 “We were young, hungry entrepreneurs, and we both loved business and also both loved cannabis,” Joshua Green, 32, said in a recent interview. He described how he and co-founder Samuel Adetunji, 30, started Veriheal, a medicinal-cannabis cards service platform.

The duo’s first iteration dates back to 2016 in newly legal Washington, D.C., where the duo tried to make money delivering cannabis. But they were up against Uber and DoorDash. “You needed a network of a million dollars and $10 million in cash just to apply,” Green said.

Plan B involved delivering paraphernalia – pipes, vapes, papers. But the fledgling entrepreneurs witnessed something unexpected: “Every person we delivered to,” said Green, “asked us, ‘Do you know how I can get a doctor, to get access to my cannabis card?’

“We got that question enough to realize there was a bigger need and a bigger audience to serve.”

Senior citizens, not surprisingly, composed – still do — over half of the market the two partners created. But even young customers popped up because the online path to a medical card challenged them, too.

Today, Veriheal, founded in 2017, operates in states legal for medical marijuana. The business is not plant-touching, but rather an educational operation: People enter their information into Veriheal’s online platform, to connect with the company’s 150 in-network doctors. The $199 fee goes to Veriheal and results in a medical card issued via mail or at the doctor’s office.

The co-founders wouldn’t divulge revenues but said that they’ve grown 5,000 percent in three years and that user numbers have spiked from 20,000 to 2 million a year. Some 150,000 customers, they said, have been approved for cards – with Covid actually having helped the business grow.

Asked about giving back to the community, Veriheal’s co-founders spoke of how their medical cards help black customers escape the threat of arrest for possession that has affected so many African American lives.

They’re emphasizing education and awareness around cannabis and health as well as opening up the cannabis profession via personal consultations and scholarships benefiting ten students. “Students are excited that there are companies out there giving these opportunities,” Adetunji said.

“One of the things I feel is most important for what Josh and I are providing is a sense of ‘it’s possible,’” Adetunji added. “It’s possible for young African American kids to get into an industry, not just to have a high representation in it, but to show them ‘we can excel’; we can be the top dogs in the industry.

“[African Americans] can be the thought leaders … as long as you persist and work hard.”