Yes, Pot Is Legal. But It’s Also in Short Supply.

In New York and New Jersey, the race is on to grow legal weed, writes Tracey Tully from the New York Times.

In Orange County, N.Y., there are plans to build a large cannabis cultivation and processing plant on the grounds of a defunct state prison.

About 25 miles south, over the border in New Jersey, an industrial complex once owned by the pharmaceutical giant Merck will be converted into an even bigger marijuana-growing hub.

The advent of legalized adult-use marijuana in New York and New Jersey is an entrepreneur’s dream, with some estimating that the potential market in the densely populated region will soar to more than $6 billion within five years.

But the rush to get plants into soil in factory-style production facilities underscores another fundamental reality in the New York metropolitan region: There are already shortages of legal marijuana.

Within New Jersey’s decade-old medical marijuana market, the supply of dried cannabis flower, the most potent part of a female plant, has rarely met the demand, according to industry lobbyists and state officials. At the start of the pandemic, as demand exploded, it grew even more scarce, patients and business owners said.

The supply gap has narrowed as the statewide inventory of flower and products made from a plant’s extracted oils more than doubled between March of last year and this spring. Still, patients and owners say dispensaries often sell out of popular strains.

Because marijuana is illegal under federal law and cannot be transported across state lines, marijuana products sold in each state must also be grown and manufactured there.

Oregon, which issued thousands of cultivation licenses after legalizing marijuana six years ago, has an overabundance of cannabis. But many of the other 16 states where nonmedical marijuana is now legal have faced supply constraints similar to those in New York and New Jersey as production slowly scaled up to meet demand.

“There’s always a dearth of flower in a new market,” said Greg Rochlin, chief executive of the Northeast division of TerrAscend, a cannabis company that operates in Canada and the United States and this month opened New Jersey’s 17th medical marijuana dispensary.

In New York, where the medical marijuana program is smaller and more restrictive than New Jersey’s, the menu of products includes oils, tinctures and finely ground flower suitable for vaping. But the sale of loose marijuana buds for smoking is prohibited, and only 150,000 of the state’s 13.5 million adults who are 21 or older are registered as patients.

With modest demand, there has been little incentive to boost supply. Until now.

Adult-use marijuana sales could begin within a year in New Jersey and in early 2023 in New York, industry experts predict.

“I would be a fool not to be making the product,” said Ben Kovler, the founder and chief executive of Green Thumb Industries, a cannabis company with operations in both states.

“There’s not a lot of inventory sitting around,” he said, at a moment when there’s a “tidal wave’’ of demand on the horizon. “It’s not likely there’s going to be enough supply,” Mr. Kovler said.

His company, he said, was awaiting final approval from New York State to begin construction on the grounds of the former men’s prison in Warwick, N.Y., Mid-Orange Correctional Facility, which was closed in 2011.

Citiva, a competitor, is also building a new production hub there. A cannabis testing lab and a CBD extract facility, urbanXtracts, are already there.

“It is the definition of irony,” he added about the reinvented role for a correctional facility that boomed during the war on drugs, imprisoning 750 men at a time and providing 450 jobs. 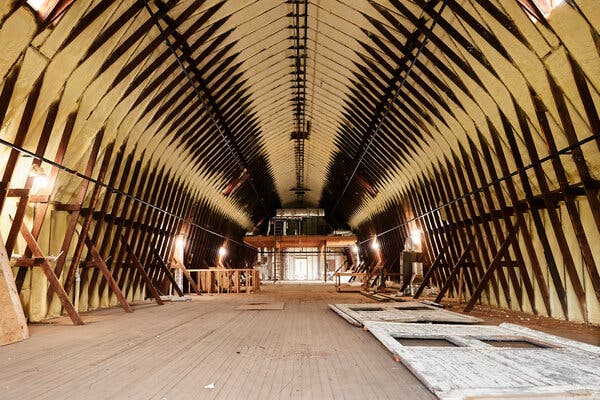 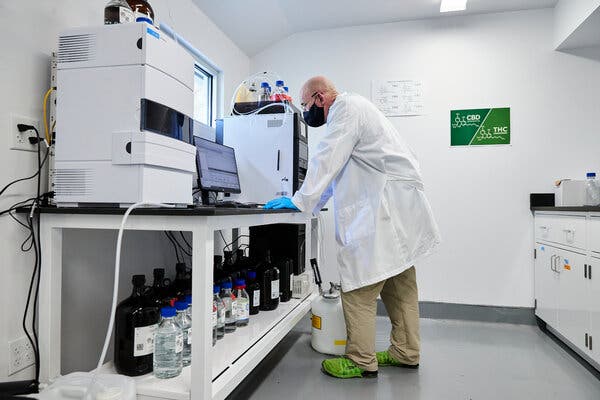 New York officials said that the state’s hemp farmers will play an important role in the effort to generate enough cannabis to satisfy what is quickly expected to become one of the country’s largest marijuana markets.

With fewer overhead costs, and a smaller carbon footprint, hemp farmers who expand to grow cannabis for certain uses may even be able to undercut indoor-facility prices for at least part of the year, officials said. Hemp, which has much less of the intoxicating chemical found in cannabis, THC, is used to make CBD oil.

New York’s law also permits individuals to grow as many as six marijuana plants for personal use; New Jersey’s legislation does not allow so-called home grow.

In the coming months, both states are expected to issue regulations to govern the new industry. Each has framed legalization as a social justice imperative and has dedicated a large share of the anticipated tax revenue to communities of color disproportionately harmed by inequities in the criminal justice system.

Trying to balance the goal of building markets focused on social and racial equity against the inherent dominance of multistate corporations with early toeholds in the region will be crucial, officials in New York and New Jersey said.

“They should have that ability to help jump start the market,” Norman Birenbaum, New York’s director of cannabis programs, said about the 10 medical marijuana companies already licensed to operate in the state. But it should not come “at the expense of new entrants,” he said.

Jeff Brown, who runs New Jersey’s cannabis programs, said the market has room — and a crucial need — for newcomers.

The state’s current operators, he said, “are not by themselves going to be able to supply the personal-use market.”

The issuance of two dozen new medicinal licenses has been delayed for more than a year by a court challenge, and some of the 12 current operators, Mr. Brown said, have been slow to take full advantage of their ability to expand.

This has resulted in caps on the amount of cannabis that can be sold to patients in a single visit. Lines to enter stores, intensified by Covid-19 regulations, are common.

“You can’t always find the strain that you may have found works best for your condition,” said Ken Wolski, a retired nurse who now leads the Coalition for Medical Marijuana, a nonprofit advocacy group. “And that’s a very frustrating thing for patients.” 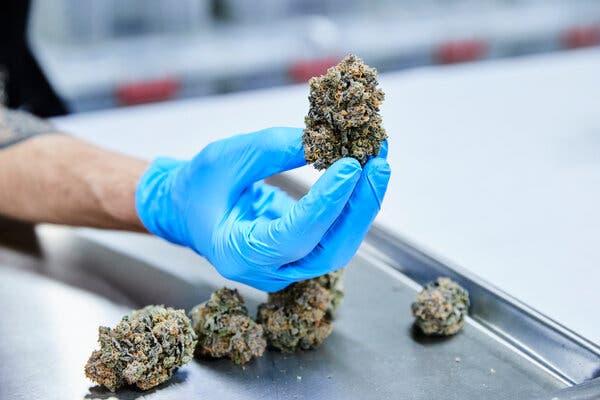 The supply-chain challenges have taken on new urgency in New Jersey, where the state’s medical marijuana dispensaries are expected to be the first locations where adults can legally buy cannabis without clearance from a doctor.

First, however, dispensaries will need to prove that they have an ample supply for patients and facilities that can adequately accommodate both types of customers.

The market in New Jersey has grown since 2019, when Gov. Philip D. Murphy, a Democrat, authorized a major expansion of a medical marijuana program that had languished under his predecessor, Chris Christie, a Republican.

In March, 20,000 pounds of cannabis products were on hand in New Jersey, up from 8,000 pounds the previous March, he said.

Still, the price of flower in New Jersey hovers between $350 and $450 an ounce before discounts. In California, the average price of an ounce of premium marijuana was about $260, according to priceofweed.com, a frequently cited price directory.

“Popular products run out and prices are still higher than we’d like to see them,” Mr. Brown said. “The key to all that is more competition.”

Last month, Curaleaf, which operates a dispensary and two cultivation facilities in New Jersey, eliminated its half-ounce limit on sales of flower after a strong yield at its new indoor-grow facility in Winslow, said Patrik Jonsson, the company’s regional president responsible for seven Northeast states. 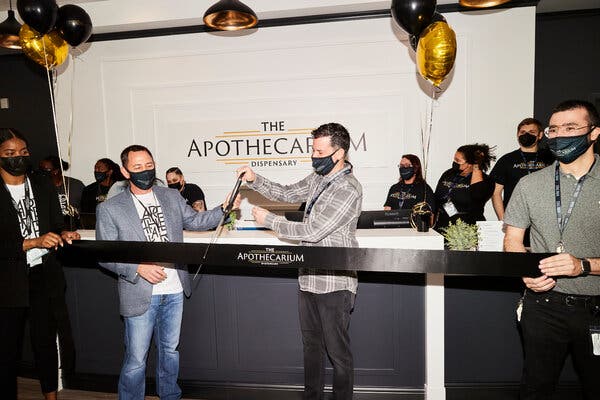 Workers at a similarly large cultivation facility in Boonton, N.J., operated by TerrAscend, put hundreds of plants into bundles of coconut coir in early 2021 to begin a four-month growing and drying process. Tiered platforms are now filled with rows of pale green and purple-hued plants.

TerrAscend’s new dispensary, in Maplewood, N.J., drew a line of customers within hours of opening earlier this month.

Stuart Zakim, one of the first people in line, talked to a cashier — the “budtender” — about alternatives to the product he originally requested but was told was not in stock.

“You’re not waiting in the dark for your dealer anymore,” said Mr. Zakim, a longtime medical marijuana patient. “You’re walking into a beautiful facility.”

“The supply issue,” he added, “is really the biggest issue.”

Tracey Tully covers New Jersey. She joined The Times in 2018 as a senior editor. She previously covered city and state government at The Daily News, the Albany Times Union and the Jersey Journal. @traceytully

As Canada reopens to U.S. citizens, marijuana not welcome

Recreational marijuana legalization could be back on the table for Ohio

Some communities opt out of marijuana dispensaries, citing lack of state guidance

Chuck Schumer Is Working Out A Plan To Federally Legalize Marijuana