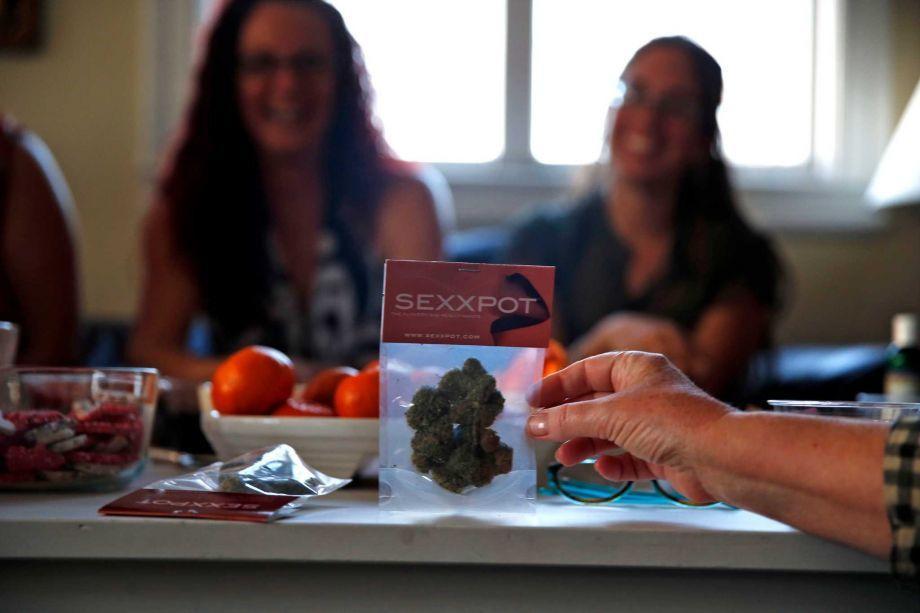 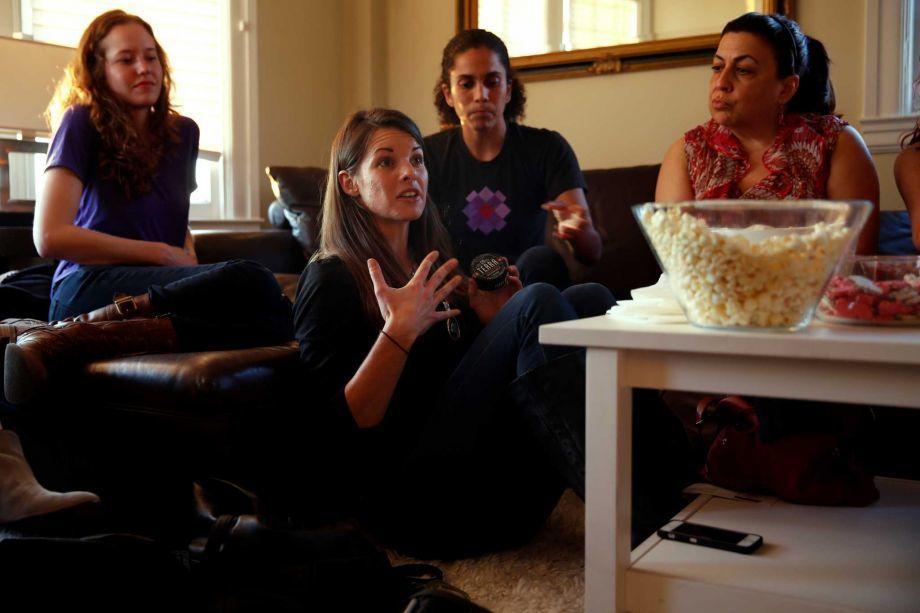 ~
The attendees — lawyers and chefs and nurses and tech executives among them — inhaled from vaporizers and erupted in laughter when a woman lauded the aphrodisiac wonders of Sexxpot, a new strain of Humboldt County-grown herb that she recently smoked with her husband.
For Amanda Conley, the host, it was “a Tupperware party for cannabis.”
Part professional women’s networking group, part social group for weed-loving women, part showcase for female entrepreneurs, last week’s pot klatch stands on the leading edge of the cannabis movement. As Californians prepare to vote on legalizing weed as early as next year, the ladies are quietly hatching two plans: to help women have more power in an incredibly lucrative industry, and to break through what some are already calling that industry’s “green ceiling.”
While women are being targeted with new products in the booming $2.7 billion marijuana market, many female weed entrepreneurs are frustrated that their voice is muted in a business that — much like those in the original Tupperware party era — is male-dominated.
Karyn Wagner, whose Humboldt collective created Sexxpot, said dispensary buyers scoffed when she pitched them the strain aimed at the female libido with the marketing tagline, “the flowers she really wants.”
“That’s because all of the buyers at these dispensaries are men,” Wagner said. “How do they know that there’s no market for it? But we hear that all the time.”
Ramona Green got similar shrugs from male buyers when she pitched them products from her Doc Green’s Healing Collective line. The Berkeley company sells topical healing creams that combine strains of cannabis with shea butter lotion. Many women, she’s found, want something that offers pain relief without the buzz. But that point is often lost.

“They’re like, 'Oh, it doesn’t get you high?’” said Green, who has a master’s degree in public health. “So they say, 'Well, then, I’m not interested in it.’”
It was stories like these that inspired Conley and her friends to create a group where women could connect over their professional, personal and health-related interests — all linked by cannabis. The group gathered at Conley’s apartment included her mother, who recently rekindled her interest in cannabis, and two women in their 20s, comparing notes on the men they met on High There, a dating app for weed-friendly singles.
They christened their group Synchronicity Sisters.
Conley and her co-organizers — Shabnam Malek, Chelsey McKrill and Isamarie Perez — met a few months ago at a local meeting of Women Grow, a national network for women in the weed business. But they wanted to create a broader space for women to share more than business cards. They knew there would be some challenges.

“We have a lot to risk because of the roles we otherwise play in society, like in the home,” Malek said.
At one of the group’s first meetings, a woman shared how she had recently visited a dispensary and asked a young male budtender if he had any strains to help alleviate her perimenopausal symptoms. The budtender’s jaw dropped — he could barely say the word.
“And then this woman working next to him nudged him and said, 'I got this,’” Conley recalled.
“It can be overwhelming for some women to go into a dispensary and see all of those products,” said Malek, who along with Conley chairs the Bay Area chapter of Women Grow. “This is the environment where it’s OK to ask those kind of questions.”
Some men in the cannabis industry acknowledge that it isn’t as female-friendly as it could be. Part of that is due to the legacy of the industry’s “boobs and buds” imagery, in which women are largely seen as ornamental.

But things are changing.
At a January conference for high-net-worth investors looking to break into the cannabis market, Troy Dayton, co-founder of the pot industry analysis firm ArcView Group, surveyed the audience in a San Francisco ballroom and told them that “for the most part, this crowd is about the whitest, male-est crowd in the world.”

Then, he made a plea for a shift. “I would just like to ask for your help in making ArcView and the industry not just another old boys’ network,” said Dayton, whose company was a sponsor of the event. “We have an opportunity to build a new kind of industry, and there’s a lot of ways to do that, but it starts with ensuring that the women that are here today feel welcomed and treated as the pioneering businesspeople that they are so that more and more women join this industry and this industry looks like America.”
One of those pioneers is Alison Ettel, who spent most of her career in finance and tech. A few years ago, she briefly lapsed into a coma after contracting viral meningitis while on vacation. For months, mainstream pharmaceutical drugs did little to help her recovery until her friends persuaded her to try weed. It helped, and she became fascinated with the industry.
She quit her tech industry job a year ago to found SweetLeaf, which makes what it describes as “healthier options for medicating with cannabis” with products like vegan blueberry almond granola.

“And all of my products are GMO-free, too,” said Ettel, an attendee at the San Francisco Tupperware party for pot. “I’m like the Martha Stewart of the cannabis industry.”
Adding to Ettel’s Martha image: She no longer consumes cannabis.
That combination, she admits, can make it hard when she’s trying to secure a supplier in Humboldt County. “Everybody was like, 'Who are you? Are you with the feds?’”
Eventually, she found a supplier to help her produce the goodies. Though the women at the party raved about her offerings afterward, Ettel learned something for the next time she presents to a small group.
“I made a mistake. I shouldn’t have handed out my samples when I’m speaking,” she said and laughed. “They were very distracted.”
~
Tags:
WeedWorthy Marijuana Legalization News, WeedWorthy Hemp News, WeedWrothy Entertainment News, WeedWorthy Culture & Arts News, WeedWorthy Cannabis Industry News Joe Garofoli
After legalization, marijuana events fighting for ...
Industry Leaders Advocate Best Practices For Canna...