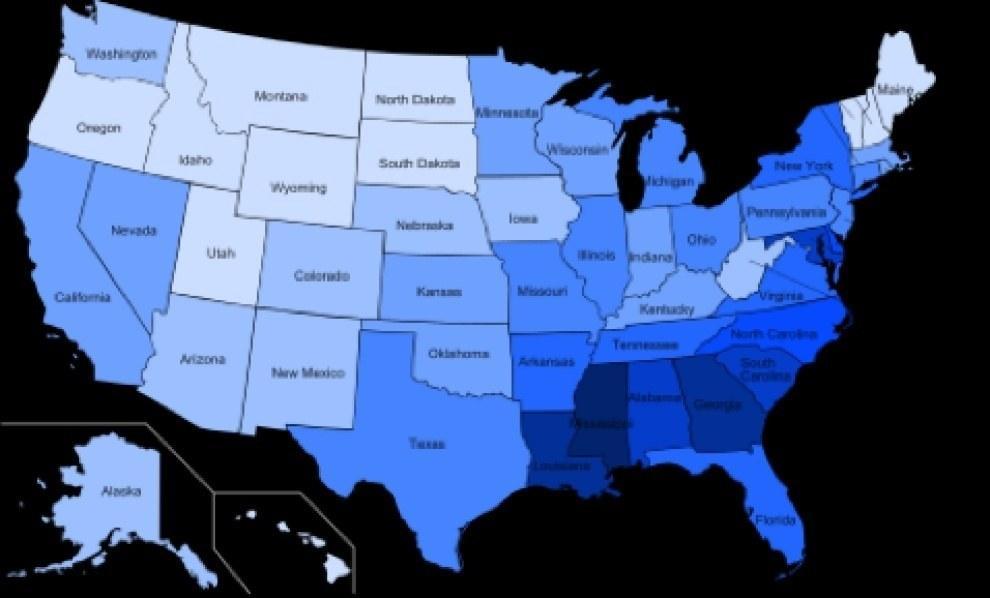 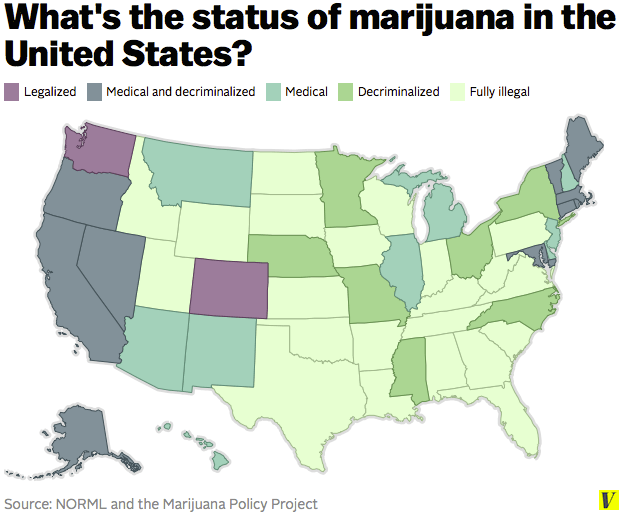 ~
States are racing to follow Colorado and Washington in ending prohibition, and national politicians are scrambling to get out of the way.
In the Senate, big names from both parties support a bill — the Compassionate Access, Research Expansion and Respect States (CARERS) Act — that would move marijuana out of Schedule I, the designation for heroin and other drugs with “no currently accepted medical use,” and into Schedule II, a group of substances that doctors can prescribe under certain circumstances. And in an interview with Vice’s Shane Smith, President Barack Obama tacitly confirmed that the federal government would now let individual states proceed at their own pace. Think of it as the gay marriage strategy for surviving social change while in national office: Stay agnostic and let the states take care of it.
But marijuana legalization and marriage equality are more different than they first appear. For one thing, in its more prohibitionist days, the federal government already established its primacy over state drug laws. In the 2005 Supreme Court decision Gonzales v. Raich, a confusing 6-3 ruling (with Sandra Day O’Connor, Clarence Thomas and William Rehnquist dissenting), the court ruled against a California medical marijuana patient whose use was legal under state law. The justices found that the commerce clause allows Congress to regulate the interstate drug market and that the only way to do that effectively is to regulate drug use within states.
The Drug Enforcement Agency operates according to the Controlled Substances Act (CSA), not state law, and “It’s legal within city limits!” is not a defense the feds recognize. The Obama administration has said it will exercise discretion, but you can hardly count on the government not to enforce the law.
Because the Constitution requires states to give “full faith and credit” to legal proceedings in other states, same-sex couples could challenge their home state to recognize a marriage performed elsewhere. But there’s no constitutional right to smoke and no obvious way for individuals to sue for their weed, even if it’s medicinal and legal under a revised federal law. As public records, marriage licenses fall under the full faith and credit clause, but prescriptions do not. Oregon State Appeals Court Judge Ronald D. Thom confirmed as much in 2010, when he ruled against Joel Dennis Berringer, a California medical marijuana patient who thought his prescription would be recognized in Oregon, which also has a medical marijuana law. Thom ruled that Berringer’s arrest for possession was legitimate, since California law could protect him only from California law enforcement. Cases like this one show that marijuana legalization has to come through legislation, not the courts.
If the CARERS Act passes and marijuana is rescheduled, it would not allow use of the drug without a prescription. Cocaine and morphine are Schedule II drugs, and you could hardly call them legal under federal law. The bill is a half-step, but some states are taking two. The District of Columbia has legalized marijuana, even though Congress has thwarted its legitimate sale by refusing to collect any tax revenue from it. Maintaining marijuana regulation under the CSA keeps the national drug war churning while letting some states go with a wink and a nod to sovereignty that doesn’t, legally speaking, exist. It’s not so different from how police treat marijuana now, letting some people coast and cracking down on others.
This raises another question of federal law: equal protection. The 14th Amendment provides for “equal protection of the law” to all citizens, and it’s this provision that invalidated parochial state rules segregating schools and banning interracial marriage. The spirit of the amendment — ratified in the wake of the Civil War and a foundation of civil-rights-era legislation — is that states are not permitted to maintain their own race codes. When you map state marijuana laws against their black populations, there’s a clear inversion. States where there are larger black minorities have been less likely to liberalize their marijuana laws, which fits with the generally racist character of the drug war. Where there are exceptions, it’s not legalization but decriminalization, which gives the police discretion — never a recipe for equal protection. The way the law seems headed, federal and state governments will uphold a prohibition that criminalizes black citizens in an explicitly disproportionate manner.
Constitutional law is above my pay grade, but the president has no such excuse. He must know this latest game plan is a cowardly abdication. Unlike gay marriage, the federal government has already decided to take the ball on marijuana: The Gonzales of Gonzales v. Raich was U.S. Attorney General Alberto Gonzales. It remains in the government’s hands. If locking people up for a joint was a federal concern in 2005, then letting them go should be a federal concern in 2015. The Constitution should not be at the whim of political convenience. Equal protection is more than just the law; it’s a national ideal, and caging someone in Georgia for a blunt while letting the packed bowl in Oregon slide is a violation of that spirit.
Malcolm Harris is an editor at The New Inquiry and a writer based in Brooklyn.
The views expressed in this article are the author's own and do not necessarily reflect Al Jazeera America's editorial policy.
~
Tags:
WeedWorthy Marijuana Legalization News, WeedWorthy US News, WeedWorthy Cannabis Industry News Malcolm Harris
Marijuana remains an issue for Nebraska athletes
Be Wary of Websites Selling Cannabis Oil