Hot off the press cannabis, marijuana, cbd and hemp news from around the world on the WeedLife News Network.
3 minutes reading time (538 words)
Featured 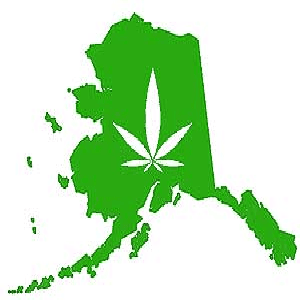 Husna Haq ~ The Christian Science Monitor
On Tuesday, Alaska became the first red state to legalize the smoking, growing, and owning of small amounts of marijuana. But smoking in public and buying and selling marijuana is still illegal.
~
On Tuesday, Alaska became the first red state to legalize the smoking, growing, and owning of small amounts of marijuana, bringing the decriminalization movement to a conservative stronghold.
The frontier state narrowly approved the measure last fall, by 53 percent, joining Colorado and Washington states in legalizing recreational use.
Under the law, adults 21 and older may possess up to an ounce of pot and grow as many as six plants. But smoking in public and buying and selling the drug remains illegal, which makes it difficult to (legally) acquire.
"You can still give people marijuana, but you can't buy it — or even barter for it," Alaska Public Media's Alexandra Gutierrez reports. "So, it's a pretty legally awkward spot. That probably won't stop people from acquiring it, though."
Alaska is the third state to legalize recreational marijuana after Colorado and Washington. Oregon and Washington, DC, are expected to follow later this year. But Alaska is unique in that it is the first solidly red state to legalize the drug.
Why did a conservative state take a decidedly liberal position on marijuana?
Although it is a Republican stronghold, Alaskans are known for their rugged individualism and libertarianism.
"This is a conservative state, but it's a state with a heavy libertarian streak," Bickford said. "People here generally want to be left alone and really don't think the government is the solution to their problems," Taylor Bickford, a spokesperson for the Campaign to Regulate Marijuana Like Alcohol in Alaska, told Vox News.
And it turns out Alaska has always been on the forefront of pot legalization. It was one of the first states to decriminalize marijuana in 1975, and voters in 1998 legalized the drug for medicinal purposes, according to the site.
This time, an unlikely coalition of libertarians, individualists and small-government minded Republicans helped legalize recreational marijuana last fall.
Of course, marijuana remains illegal under federal law. State legalization has been allowed to proceed only because of Department of Justice guidance that asks federal prosecutors to refrain from targeting legal marijuana operations in states that have passed measures allowing recreational use.
Nationally, a slim majority of Americans now support legalization. Some 51 percent favor legalizing the drug, according to a 2014 Gallup poll. But that's down from the 58 percent who supported it a year ago.
Who's next? As the Monitor earlier reported, legalization advocates say that 2016 is likely to be the next big year, when Arizona, California, Maine, Massachusetts, and Nevada could all vote on legalization, potentially bringing legalized pot to more red states and to the east coast.
By 2020, according to the Huffington Post, there could be as many as 18 states where recreational marijuana is legal.
~
Tags:
WeedWorthy Marijuana Legalization News, WeedWorthy Political News, Husna Haq,
×
Stay Informed