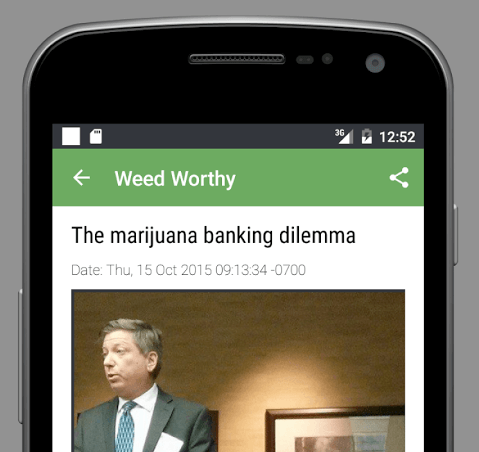 A rapidly-growing part of The WeedLife Network, a ground-breaking group of websites and apps for marijuana businesses, organizations and consumers, the new WeedWorthy app will help the public stay up-to-date on cannabis news and data.

DENVER (January 11, 2016) – Just in time for 2016, a year expected to bring with it dramatic changes to legalized marijuana in the United States and worldwide, The WeedLife Network is releasing its new WeedWorthy mobile app.

The app allows viewers to access the latest cannabis-related news on their smart phones and tablets, using information accessed from the WeedWorthy.com web site. That site, a combination of original content and aggregate news articles produced by The WeedLife Network, brought in close to 500,000 page views in November while attracting over 91,000 unique visitors.

The WeedWorthy app provides quick and convenient mobile access to news alerts. It also allows users to create and customize their own news streams; giving them the ability to have at their fingertips important and constantly-updated cannabis industry and culture information.

“The cannabis industry is growing and changing at a pace that is many multipliers faster than any other industry in the history of business, worldwide,” says Andy Rodosevich, The WeedLife Network’s CFO and co-founder. “A person interested in the legal cannabis sector, who misses out on news, press releases or even blog articles about the industry, even for just a few days or a week, could find themselves making choices and assumptions based on very outdated information or data.”

The app is currently available for download on Android devices at the Google Play marketplace and is currently in the review process at iTunes for iPhone users (with an expected availability date of January 15th).

“When we designed this app, we wanted to create a resource that would do justice to the wealth of content that we provide readers every day on WeedWorthy.com – but would also deliver it in the handy, responsive, and user-friendly format that cannabis professionals and enthusiasts of all ages need, in effort to stay on top of a rapidly-changing and growing industry,”  says Shawn Tapp, CEO and co-founder of The WeedLife Network and a 20-year veteran of digital marketing.

Rodosevich notes the new app was designed in response to the hundreds of business owners and cannabis enthusiasts looking to enter the legal marijuana industry.

“These are the people that make a difference, with their daily work in cannabis,” he adds, “and who don’t want to make important business decisions based on stale data or old rules and policies that have changed in their local markets.  So having the ability to stay current on a daily basis, by pulling out their mobile device and accessing our WeedWorthy app was to us a top priority."

WeedWorthy is just one of the more than 40 web sites and apps that help bring cannabis organizations, businesses and consumers together within The WeedLife Network – a network that currently receives more than five million total page views per month.

The WeedLife Network is a group of free-to-use social websites and marketing apps specifically designed to accelerate the growth of the cannabis industry and shorten the business learning curve for new companies entering the marketplace. The network provides an online social platform of connected websites and applications that target the many consumer and business demographics in the cannabis industry, in effort to bring them together for easier collaboration.

What's next for the legal cannabis sector?