Weed's Next Big Problem is the Wrong Type if Green

IN 2012, when Colorado and Washington became the first two states to legalize marijuana for recreational use, cannabis users everywhere rejoiced. Legalization continues to spread across the United States, with Virginia becoming the latest state to embrace pot.

Fans of legalization list the prospect of taxing legal weed and generating new jobs, as reasons to go big on marijuana. In 2019, the legal cannabis industry generated $13.6 billion in annual sales in the U.S. That number could reach a staggering $130 billion by 2024.

But another aspect of legalization is overlooked: the negative effect cannabis production has on the environment.

In a new study, a Colorado State University research team examined the relationship between greenhouse gas emissions and cannabis cultivation. They found shockingly high amounts of emissions baked into marijuana processing — a dangerous side-effect of the Jolly Green

WHAT’S NEW — This finding was published Monday in the journal Nature.

An investigation of indoor cannabis cultivation across the U.S. revealed each kilogram of dried cannabis flower results in 2,283 to 5,184 kilograms of carbon dioxide emissions, depending on the geographic location.

By comparison, a year of driving a car that burns 2,000 liters of gasoline releases about 4,600 kilograms of carbon dioxide emissions.

As more states legalize and establish requirements for the cultivation of weed, indoor cannabis cultivation — as opposed to a greenhouse or outdoor cultivation — has become the preferred choice because it allows for temperature control and other factors that support growth.

These factors are what drives emissions, the study suggests.

Lead author Hailey Summers, a graduate student at Colorado State University, tells Inverse that, as cannabis production has evolved, the industry has developed some common practices that stem from early legal restrictions.

“Our study investigated these common practices of growing cannabis indoors not only in Colorado but around the U.S. to understand the greenhouse gas emissions,” Summer says. 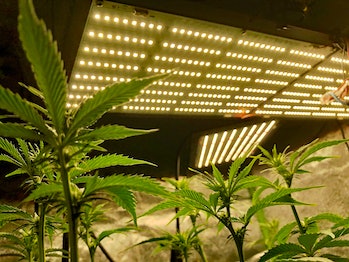 HOW THEY DID IT — Summers and her colleagues developed a cannabis cultivation model, tracking the emissions that result from all the different elements necessary to grow marijuana indoors in a warehouse environment.

The team calculated the energy needed to grow marijuana in such conditions, using a year’s worth of hourly weather data from more than 1,000 places. The locations span all 50 states, regardless of whether or not they have legalized cannabis for recreational use. The hope, Summers explains, was to evaluate current indoor growth systems and “to predict values for those states who have yet to legalize.”

The model was designed to convert the energy for these facilities — supplied largely by electricity and natural gas — into the resulting greenhouse gas emissions. 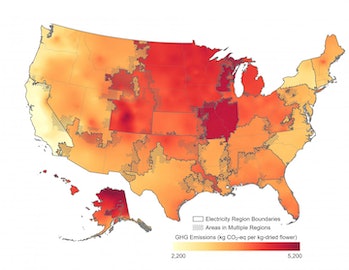 A map illustrating greenhouse gas emissions from the cannabis industry across the U.S.Hailey Summers/Colorado State University

DIGGING INTO THE DETAILS — The researchers found greenhouse gas emissions varied widely based on geographic location, from a low of 2,283 kilograms in emission in Long Beach, California to a high of 5,184 kilograms in Kaneohe Bay, Hawaii.

The difference between these two locations is largely due to the energy source used for cultivation. Natural gas and solar power — which have lower emissions — dominate Long Beach, whereas oil-based energy sources are more common in Kaneohe Bay.

Based on their findings, the researchers generated a map showing greenhouse gas emissions by state. Some parts of the country face higher emissions due to the amount of energy required to cool and heat the facility as a result of outdoor weather conditions. These areas include the Mountain West and the Midwest.

The researchers also found variations within states. For example, facilities in the mountainous regions in Colorado produced more emissions than those in more low-lying areas, such as Denver.

Because federal law prevents the transportation of marijuana across state lines, it will be up to states to determine where to build facilities that will have the lowest impact on carbon emissions, the study suggests.

However, even across geographic locations, some variables in indoor cannabis cultivation contributed more to greenhouse gas emissions, including: 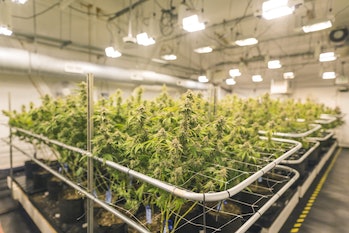 HVAC systems are the most significant contributor to greenhouse gas emissions, making up to a 230 percent difference in a facility’s emissions depending on the geographic area.

HOW CAN CANNABIS GROWTH BE BETTER FOR THE ENVIRONMENT?

“For indoor growth systems, the ‘greenest’ way would be to invest in clean-energy equipment and optimize a facilities heating, ventilation and air conditioning (HVAC) systems,” she explains.

However, outdoor facilities come with their own challenges — and the researchers don’t yet recommend switching entirely to an outdoors-based model just yet.

“Beyond greenhouse gas emissions, there are also many additional environmental factors that need to be considered, including illegal water diversion, pesticide use, and land-use change,” Summers says.

“The most ideal solution will probably be a combination of all three major growth systems: indoor, greenhouse and outdoor.”

WHY IT MATTERS — In Colorado, the emissions levels resulting from cannabis cultivation are on par with polluting industries like coal mining and waste management.

According to a previous article this team published in The Conversation, one serving of cannabis is linked to more greenhouse gas emissions than a serving of beer, wine, spirits, cigarettes, or coffee.

“THE MOST IDEAL SOLUTION WILL PROBABLY BE A COMBINATION OF ALL THREE MAJOR GROWTH SYSTEMS.”

As new states continue to legalize weed, this is a prime opportunity to establish guidelines for emissions standards regarding the indoor cultivation of marijuana, Summers says. She cites two recent policies designed to reduce energy loads from indoor cannabis:

“The first is the California Statewide Codes and Standards Enhancement Program proposal that would require all indoor facilities to operate using LED grow lights by 2023. The second, in Illinois, limits the lighting intensities and requires grow facilities to commit to using high-efficiency HVAC equipment.”

The researchers also recommend that states considering legalization follow the guidelines set forth by Colorado, in response to the state’s issue with polluting practices. 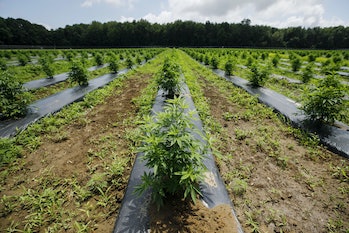 An outdoor cannabis farm. Outdoor facilities produce fewer emissions, but also come with their own challenges, according to researchers. Cole Burston/Bloomberg Creative

WHAT’S NEXT — As the legal marijuana industry continues to boom, these findings could inform the future of cannabis cultivation. Will it be an environmentally sustainable industry or an unsustainable one?

Summers says that three players will provide the answer to that question: business owners, government regulations, and consumers

“I think that all three will play an important role in developing this industry in the cleanest way possible,” Summers says.

While government regulations could certainly encourage more sustainable practices, Summers says we shouldn’t be too quick to dismiss the business owners who have the most at stake. Lawmakers should design policies with cannabis cultivators in mind.

“The reality is that growing plants indoors is energy-intensive and restricting these operations too much could result in a loss of quality or total product,” Summers says.

Summers also warns we shouldn’t discount the vital role that consumer demand plays in shaping the future of the cannabis industry, including its environmental impacts.

The first option for consumers involves buying specifically from low-emissions growers, but that option isn’t yet a reality, according to Summers.

“As it stands, purchasing from producers using low-emission growing methods isn’t feasible just yet, because not all facilities know their carbon footprint,” Summers says. “I certainly see it as a potential piece of information that users could use for decision-making [but] we are a bit away from that reality still.”

The second option for consumers who care about the environment requires a little more personal restraint: cutting down on marijuana usage.

“Cutting down their consumption is another interesting idea, and we are currently working on some preliminary comparisons to other recreational consumables for consumers to be more informed,” Summer says.

Is Cannabis The New Wellness Drug For The Modern H...
8 Things You Must Know About Hemp

Delta-8 Vs Delta-9: What’s The Difference?

Is Delta-8 THC Legal? What Does The Law Says?

11-hydroxy-THC and the Power of Edibles

6 Amazing Things You May Not Know About CBD Wax

Trichomes Are the Key to Most Potent Cannabis Flowers