Hot off the press cannabis, marijuana, cbd and hemp news from around the world on the WeedLife News Network.
1 minute reading time (267 words) 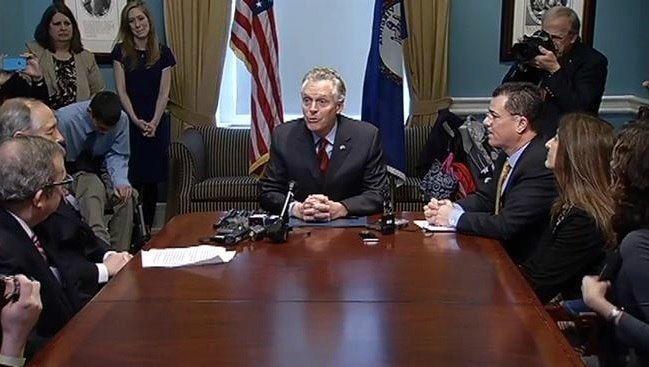 Associated Press / NBC4 Washington ~
Virginia Governor Terry McAuliffe signed a bill Thursday that will allow patients with severe epilepsy to use cannabis oil without the fear of prosecution.

~
The Virginia General Assembly passed legislation earlier this month allowing the use of two derivatives of the marijuana plant for treatment of intractable epilepsy. According to the Mayo Clinic, patients with intractable epilepsy have seizures that fail to respond to "at least two appropriate anti-seizure medications."
A written certification from a doctor is required to get cannabidiol oil or THC-A oil.
During the signing of the bill, McAuliffe was surrounded by six families with epileptic children who have suffered debilitating side effects from taking legal drugs. Jennifer Collins and her parents were among that group.
The 15-year-old Fairfax County teen balances school, extracurricular activities and social life while battling debilitating seizures daily.
To ease the pain, Jennifer’s parents made huge sacrifices. In 2013, they moved to Colorado, and for a year Jennifer used cannabis oil. But family pressures forced them to move back to Fairfax.
Lawmakers were moved by emotional testimonies from the families and praised them for being effective advocates for the new law.
The bill is the first effective medical marijuana legislation to win approval in Virginia, according to its House sponsor, Del. Dave Albo.
Albo said medical marijuana for treatment of cancer and glaucoma is technically legal in Virginia, but federal law prevented that law from being implemented.
~
Tags:
Cannabis Legaliazation, WeedWorthy Marijuana Legalization News, WeedWorthy Medical Marijuana News,
×
Stay Informed

Today Ted Cruz Is a Marijuana Federalist? A Year A...
Safe Streets Alliance wants cannabis back with cri...