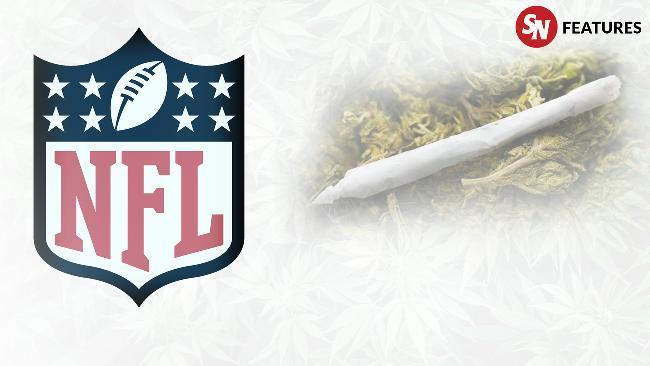 David Steele ~ Sporting News ~
The nation’s laws, and its perspective, on marijuana are shifting, and the NFL is trying to keep pace.

~
But, just as is still the case in nearly all of the country, using it in the NFL has a price, as top-five draft prospect Randy Gregory found out when he tested positive at February’s NFL Scouting Combine.
Still, could America’s most popular and profitable sports league legalize marijuana one day — not just medicinally but recreationally, as four states and the District of Columbia have done? Now that the NFL has updated its drug policy and reduced the punishment for a positive test, could a day come where players are no longer tested and no longer punished for using it?
“I’m not a doctor, but I will say I think as things change and evolve, where the league is and where the players association is, it brought us current," said NFL executive vice president Troy Vincent. “And I think both organizations will continue to look and evaluate, so that certain substances are in the proper category.’’
On the other hand, it’s not likely any time soon, most observers agree — and it’s not because of the emerging research on its health benefits or its relative danger compared to other drugs, including alcohol.
As long as marijuana is still illegal in the NFL, testing for it is still considered an IQ test, and there’s a cost to flunking it.
“I think our league is trying to have a set of rules and regulations that an athlete has to live up to, and in order to be part of the league, you have to live up to them,’’ said former head coach Herm Edwards, now an ESPN studio analyst. “You may not like the rules, but there are consequences to violating them. Right now, in our league, it’s on the list of banned substances.
“Are we naive enough to think that players are not using marijuana? No … But you’re making a career decision when you put things in your body that could affect your career. That’s your choice. And there ain’t no gray area. Players can’t say, ‘I didn’t know.’ They know.’’

Marijuana question: Can you be trusted?

That’s the problem Gregory, the Nebraska product who is arguably the best pass rusher available in this week’s draft, created when he went public last month with his failed result from Indianapolis. His draft projections have fallen from top-10 at worst to the bottom half of the first round, or out of it completely. In Sporting News’ latest mock draft, Gregory is the first pick of the second round.
But apparently it’s not because of an outdated opinion about marijuana by NFL teams. Last year’s collectively-bargained adjustment to the drug policy chips away at that notion: It raised the threshold for a positive test and reduced the penalties, which is why the Browns’ Josh Gordon had the season-long suspension handed down earlier in 2014 reduced to 10 games.
Meanwhile, players not in the substance abuse program are tested just once all year between April 20 and August 9 (early in the preseason), which gives them a fairly sizable window to use during the season. It’s all widely seen as a subtle understanding that players can, and will, use with little harm to themselves or others, much as they might have a few drinks between games. In fact, many have noted, teams often are relieved that players are using marijuana instead of alcohol, knowing how many legal troubles are rooted in getting drunk.
Plus there’s the medicinal value in a league that functions at its most basic level on managing pain, physical and psychological. Former tight end Nate Jackson, who wrote a 2013 memoir of his playing days, “Slow Getting Up,” has openly advocated for legalization of marijuana in the NFL for exactly that reason.
“What do you want to give (the players)? A bunch of opioid pain medications, or let them medicate with the things that help their bodies instead of hurting them more?” Jackson said.
It’s an unspoken pact of sorts, he added: “These teams, individual teams, know that their individual players smoke weed. I don't think they’re necessarily opposed to it. I think what they’re opposed to, is their player testing positive for it.’’
Which is Edwards’ original point … and the issue the NFL has with players like Gregory who will enter the league already in the testing program despite knowing the rules and being informed of the pre-draft process and the testing calendar.
It’s the same problem the Browns and the NFL have with Gordon, who has proven unable to navigate the rules regarding the substance and is currently suspended for the upcoming season.
“The choices you make are your choices,’’ Edwards said, “but they affect the whole team. Can we trust this guy? And if he does have a problem, and the guys in the locker room know this, are they going to hold him up? Will they straighten him out? Is your locker room strong enough to pull him back on track and not let him take down what they have?”

Legalization: Next logical move for NFL

Every team is having that internal conversation about Gregory, as it has about past players who came into the league with drug-related baggage. Besides their draft position and their initial contract, it can lead teams to pack the player’s contract with clauses that can reward him for staying clean, or protect the team if he doesn’t.
The Cardinals did such a contract for safety Tyrann Mathieu after he fell to the third round in 2013, after he had been kicked off the LSU team for multiple marijuana-related violations.
A failed test, then, still raises the risk-reward factor. It’s reduced Gregory from draft lock to draft steal at a lower spot, NFL Network draft analyst Mike Mayock said on the network earlier this month. In explaining why he moved Gregory from second in his edge-rusher rankings to fourth, then back to second, he said: “One is that he's an undeniable top 10 talent, and the other is that he's been nationally humiliated by testing positive at the combine. He’s going to lose millions of dollars as he continues to slide down everybody's board, and as such I look at this as, what a great opportunity to get an unreal talent later in the draft for less money.’’
Yet an argument can be made that marijuana use shouldn’t be a detriment to any player at any stage of his career, and that legalizing it in the NFL is the next logical move.
“Especially since the social tide is shifting,’’ said Jackson, the former tight end. “The stigma, the negative publicity, is the problem. As long as these guys aren’t getting arrested, they should do it. If you take it off the banned substance list, you’re taking it off the news, too.’’
Nobody sees that happening any time soon, though. Vincent said that the NFL has no problem continuing to study it and stay on top of research on medicinal use.
“It’s not something that we’re arbitrarily changing for this reason or that,’’ he said. “I think this is an emerging conversation we’re having.  You stay at the table discussing, one, how to strengthen your policy, and two, how do you support that policy.’’
The NFL is not there yet, even if some parts of the country already are.
“We’re getting accustomed to being more lenient,’’ Edwards said. “But there still needs to be — not really rules, but expectations. This still should be a league of accountability.’’
~
Tags:
WeedWorthy Marijuana Legalization News, WeedWorthy Sports News, WeedWorthy Cannabis Industry News David Steele, NFL Marijuana Stance, NFL Marijuana Leglization, NFL Marijuana Use,
Oregon utilities prepare for demand spike from mar...
Medical marijuana growers can apply in New York