Hot off the press cannabis, marijuana, cbd and hemp news from around the world on the WeedLife News Network.
4 minutes reading time (804 words)

The legalities of hemp: Navigating the constantly-changing rules and regulations 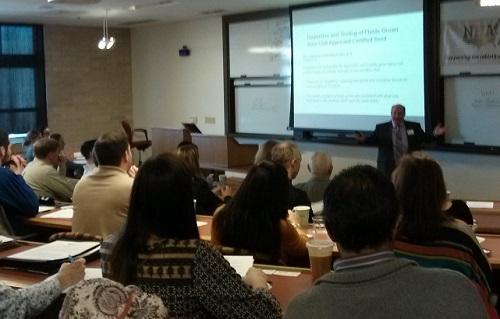 A recent law seminar on industrial hemp underscores the industry’s challenges and opportunities.

Earlier this month, in a packed classroom at the University of Denver’s law school, more than 60 people listened intently to a line-up of speakers: experts who deal regularly with the legal issues surrounding industrial hemp in the United States.

The event’s organizers, the National Hemp Association (NHA), say they’re trying to assist those interested in industrial hemp as they navigate the sector’s rapidly-evolving legal statutes.

”The biggest need for a seminar like this is because the legal issues are complex, changing and inconsistent between state and federal (laws),” said Zev Paiss, the NHA’s executive director.

Paiss described the state of the U.S. hemp industry as being “very much in flux.” And he says that while hemp production is still prohibited on a federal level, 28 states have legalized the growing of industrial hemp.

“I’m very hopeful because we do have so many states that have passed something,” he told WeedWorthy during a break at the seminar.

“There’s a lot of pressure on the federal government to support what the states are already saying they want,” he continued. “And there’s like another dozen states that have legislation in motion right now; so by the end of this year, regardless of what happens at the federal level, we could have well over 35 states that have passed some kind of legislation.”

Congress, meanwhile, has also opened the door for more U.S. hemp production via the Industrial Hemp Farming Act of 2015.

That measure calls for amending the federal Controlled Substances Act to exclude industrial hemp from the definition of “marijuana.”

Hemp, while a cannabis variation, contains only trace amounts of the delta-nine tetrahydrocannabinol (THC) compound that gives marijuana its “buzz.” And the Act would further define hemp to mean a cannabis plant with a concentration of not more than 0.3 percent THC “on a dry weight basis.”

The Industrial Hemp Farming Act has broad bipartisan support. And despite the current congressional gridlock, there is hope and what Paiss says is “a growing chance” that the measure could be passed. At any rate the Act seems to be an indication of how the country sees the opportunities – financial and otherwise -- behind a revived, legal and legitimate hemp industry.

In a recent interview with MassLife.com Morgan Paxhia, managing director and co-founder of Poseidon Asset Management – a firm that focuses on investment opportunities in cannabis and hemp-related companies – said hemp has about 25,000 commercial uses, ranging from clothing to food and construction products. He also described it as a "whole different industry" from marijuana; with industrial hemp having the potential to become ten times as large as the legal cannabis industry.

Hemp is already part of America’s commercial landscape; you can buy hemp-blend carpets at JC Penney and hemp seed cosmetics at Target. But nearly all of that hemp is grown overseas. According to the Hemp Business Journal, U.S. companies imported more than $150 million of raw hemp last year, which was converted into around $500 million-worth of finished hemp products.

David Bush, a Colorado-based attorney who specializes in industrial hemp issues, says two factors have given the U.S. industrial hemp movement a momentum that cannot be ignored.

Along with grassroots support for hemp as a sustainable crop that can create many new jobs, there’s also pressure from families who have been treating their children with cannabidiol (CBD) oil derived from hemp and/or marijuana. CBD remains illegal on a federal level but that has shown promise as a treatment for seizures, chronic pain and other ailments.

“We see all kinds of people who are taking the situation into their own hands, and that’s driving the legal change,” he told WeedWorthy after addressing the NHA legal seminar.

“So change is not coming from the top, it’s coming from the moms and dads that have sick children,” Bush added. “It’s coming from people who are sick and tired of being told what to do with their lives. And because so much of what’s really driving things is medical, and it’s hard to argue with things that make people feel better, the law is starting to kind of drag itself along. And that’s what you’re seeing in state (legislatures).”

NHA’s Paiss says one of his organization’s main goals is to help educate both lawmakers and the general public when it comes to the differences between marijuana and hemp. And once that distinction is understood, he says, his job will become easier.

“When people understand what we’re talking about, and that we aren’t talking about marijuana, are very excited,” he said, “because they can see how we can reinvigorate rural economies and give jobs to farmers. When they understand what it is, there’s a lot of support out there.”