American attitudes towards the legalization of marijuana have shifted in the last few years. In 2019, 66% of Americans say the use of marijuana should be legal, which represents a stark difference from the 33% of Americans who supported the measure in 2009. 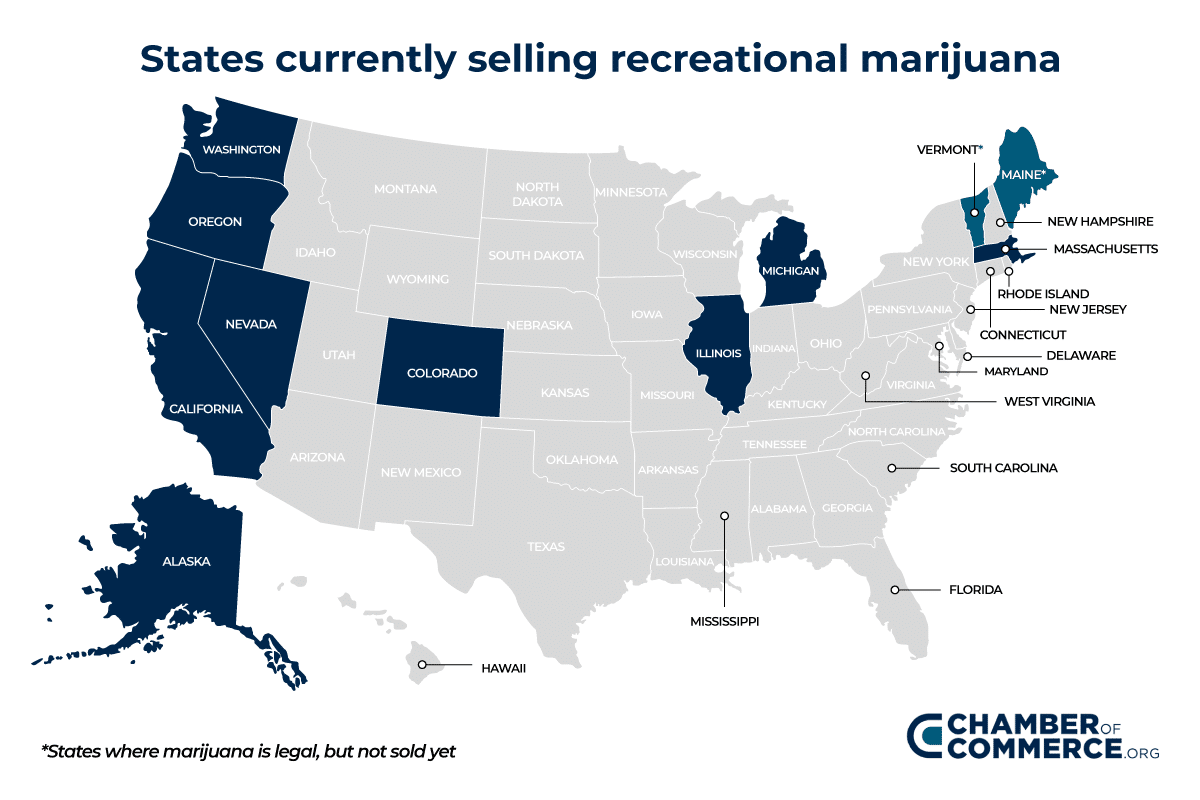 States where marijuana is legal, but not sold yet:

Selling marijuana recreationally is a fairly new trend, so as you might expect, the tax codes are still evolving.

As it stands right now, every state taxes marijuana differently.

Some charge consumer’s a sales tax and charges the growers an excise tax.

Some states charge a tax based on weight or potency.

To clarify the patchwork of tax rules, we’ll explore which recreational states levy the highest taxes.

What do the different types of taxes mean?

When a state moves to sell recreational marijuana, the state must decide how to tax it. Every state is different, but most states utilize three different ways to levy taxes, which include:

These taxes work similarly to sales tax, where the consumer pays a certain percentage on top of the retail price and the retailer turns it over to the state. In most cases, the retailer increases its prices to cover this cost.

Weight-based taxes are modeled after cigarette taxes, where a tax is levied on every box. With cannabis, the tax is levied by the weight of the plant as opposed to a box. Usually, there’s a different amount of tax assigned to different products.

This tax is usually passed on to the consumer as well.

Potency-based taxes are modeled after liquor, where drinks with stronger alcohol content are taxed higher. With marijuana, potency is based on THC levels. The higher the level of THC, the stronger the product.

Illinois is the only state that levies taxes like this. As you can see from the chart above, the strongest products (those with a THC concentration above 35%) are taxed the highest at 25%. The percentage of tax levied decreases with the strength of the product.

Which state has the highest taxes?

Washington’s 35% tax is the highest tax charged out of all nine states that allow recreational pot sales. The state’s tax is more than double that of Washington’s southern neighbor, Oregon, which levies a 17% tax.

Other states like Nevada, Michigan, and Massachusetts set their tax rates at about 10%.

Why are taxes in Washington so high?

There doesn’t seem to be a rhyme or reason, except to say that the industry is so new that every state is creating its own rules. While the dispensary owners, growers, and processors have voiced their concern about the high taxes eating profits and limiting their ability to grow, the state seems steadfast in its decision to keep the tax rate where it is.

The tax rate may be met with resistance, but it has generated some major profits for the state. Washington collected $395 million in 2019, with an estimated 500 shops operating statewide. The industry is so saturated right now that the state has temporarily stopped issuing licenses.

Washington’s taxes are the highest, but it’s not the most expensive place to buy marijuana

Washington changed its tax structure in 2015 that assigned specific tax levies to processors, retailers, and retail sales to 37% on retail sales. The shift in taxes makes it the most heavily taxed state to sell recreational marijuana.

You might expect to see these high costs passed to the consumer, but that’s not the case. When you look at the average cost of an eighth ounce of marijuana in the state, it costs $35.42, which includes taxes. That’s $10 less than people are paying in Alaska; the most expensive state to buy marijuana in.

Alaska is the most expensive places to buy pot recreationally

Alaska, a state with middle-of-the-road taxes levied on recreational marijuana, is the most expensive place to buy the product. In Alaska, consumers pay $45 per eighth ounce.

Nevada comes in next, where consumers pay $43 per eighth ounce. California charges $41, while Massachusetts and Washington sell an eighth for about $35.

Colorado and Oregon are the cheapest states to buy recreational weed in, where an eighth of an ounce sells for about $30.

What’s going on in Alaska? Why are prices so high?

Research suggests several reasons. For starters, demand is higher than supply, which gives retailers the chance to charge a bit more. In addition, Alaska’s cannabis retailers say the state forces lab testing to be done on every 5-pound batch of weed, which can be costly.

Both Colorado and Washington have collected taxes on recreational cannabis since 2014, and it’s adding up.

In 2018 alone, Colorado collected $267 million and Washington collected $439 million. With annual tax collections like this, many states see the financial benefit of selling marijuana recreationally.

States that collect taxes on recreational marijuana have all designated the funds for different uses.

Alaska uses the money to reduce the number of criminal offenders Colorado puts all of its cannabis taxes into education Washington directs its funds to healthcare states like California divide the funds into many different pots, including drug prevention programs, economic development, academic programs, and youth programs

For people looking to open a dispensary, understanding how the product is taxed is a major part of the financial picture – but not all of it.

The average cost to open a dispensary can range widely.

One estimate has the cost between $250,000-$750,000 while another quote suggests startup costs can hit $2 million. Here’s a look at some of the costs along the way:

You’ll likely build or renovate a building for your retail store, which can add up quickly. An estimated $150,000 will go towards the design, construction, and furnishings needed to make the retail space functional and inviting.

You’ll need store managers, budtenders, and security, all of which can add up to about $250,000 a year when you’re paying industry-standard wages of $10-$20 an hour.

You’ll need inventory on the shelves to open and a steady stream of it coming in to stay that way.

There’s a fair amount of marketing that must be done to run a successful dispensary. These costs vary widely by owner but can be as much as $20,000 a month.

In states like Washington, the number of licenses given out is capped. Once they’re all doled out, a license must be purchased from a current licensee. As you might expect, the cost to buy a license in this manner is very expensive, costing upwards of $60,000.

Ways to Use Cannabis to Manage Stress

Major And Minor Cannabinoids — Which Ones Do You Need To Know By Name?