Hot off the press cannabis, marijuana, cbd and hemp news from around the world on the WeedLife News Network.
9 minutes reading time (1860 words)

Will bipartisan talks in Harrisburg finally spark recreational marijuana legalization, or is the latest effort to go green destined to go up in smoke?

With neighboring states including Maryland, New York and New Jersey establishing their own private adult-use cannabis markets, Pennsylvania may be feeling peer pressure to act. The General Assembly has taken steps this year to learn more about recreational cannabis legalization through a series of public hearings in Senate committees, and a pair of bipartisan proposals suggest the commonwealth may be closer to legalization than ever before.

“I think that there is a growing sentiment in the Pennsylvania General Assembly that it’s not whether we legalize cannabis, but when,” state Sen. Sharif Street, a Democrat from Philadelphia, told City & State. Street, alongside state Sen. Dan Laughlin, an Erie County Republican, introduced Senate Bill 473, an adult-use marijuana legalization proposal, last year.

The proposed legislation calls for a “rational framework” for legalization. It would allow adults 21 and older to purchase and possess up to 30 grams of cannabis, allow medical patients to grow up to five plants at home for personal use, ban marketing toward children, provide workplace and intoxication rules and emphasize social equity by creating equity licenses and expunging criminal records for anyone with a non-violent cannabis conviction.

Street and Laughlin aren’t the only ones with a proposal, however. State Sen. Mike Regan, chair of the Senate Law and Justice Committee, has been spearheading the hearings process as he prepares to introduce his own bipartisan legalization bill. Regan has said his interest in legalization stems from his experience as a U.S. marshal, where he said he witnessed organized crime and drug cartels benefit from the illicit market.

Legalization has been a hot topic in the commonwealth for the past few years, with Gov. Tom Wolf and Lt. Gov. John Fetterman joining Democratic legislators’ calls for the Republican-controlled General Assembly to consider proposals for adult-use marijuana. This time around, experts say, it feels different, with Republican lawmakers holding serious conversations as surrounding states reap the tax benefits of a regulated market. 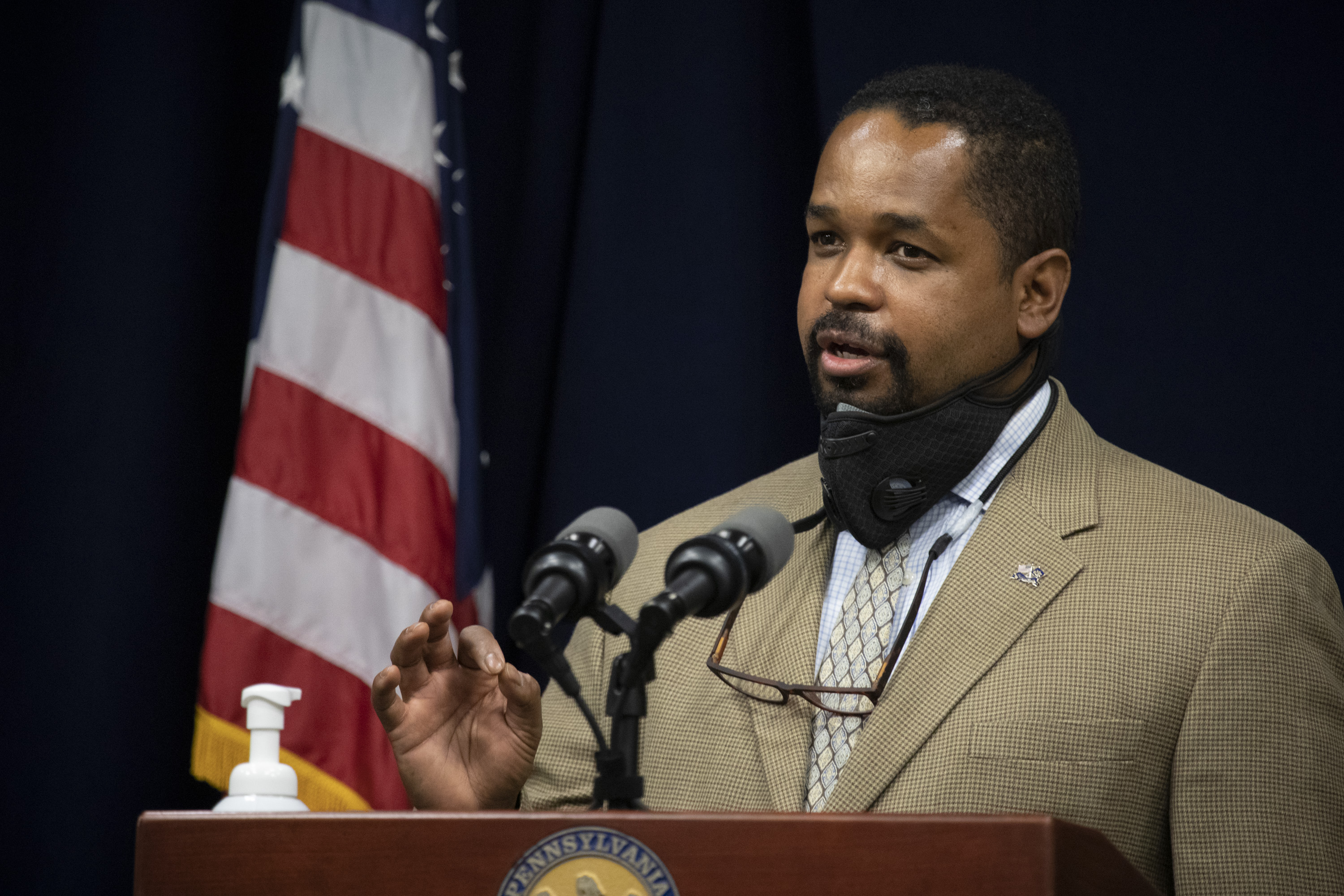 “I think there’s a growing awareness across the country about the need for reform in this area,” Jeremiah Mosteller, senior policy analyst for criminal justice reform at Americans for Prosperity, a libertarian-conservative political advocacy group that has expressed support for legalization, told City & State.

Mosteller said AFP began to get involved in the issue as public support for legalization grew and evidence revealed prohibition was not working.

“We’re actually seeing adult-use continue to go up. The black market continues to thrive regardless of what we do, and that brings along with it lots of other violent and nonviolent crimes that actually have victims,” he said, adding that law enforcement “is only solving about 42% of violent crimes and 15% of property crimes. We believe that is leaving too many victims without justice and jeopardizing public safety because we’re investing so many resources into the prohibition of cannabis and not actually achieving a positive outcome.”

Getting the conversation started is just step one. From there, lawmakers must consider not only the complex issues related to developing a new regulatory framework, but also the best policy options that take health, public safety and equity into account.

Beau Kilmer is a senior policy researcher at the RAND Corporation and director of RAND’s Drug Policy Research Center. While working with states and researching legalization policies around the country, Kilmer said he found that pricing plays a critical role in the development of a competitive market.

Kilmer said there’s no “best way” to tax cannabis but that there’s a growing consensus that taxing it as a function of price may not be it. He mentioned one proposal, which is being considered in New Hampshire, to have the state establish its cannabis market, similar to how Pennsylvania handles its liquor distribution.

“We’ve already seen the prices decline quite a bit. It’s getting harder, in a lot of places, for your smaller entrepreneurs to compete,” he said.

“One of the advantages of the state-store model is that it allows the state to not only control the products on the market but also kind of control the price, as opposed to waiting for competition to push things down.”

Pricing is also crucial in forcing out the illicit market – something that people on both sides of the legalization argument have expressed anxiety about.

State Sen. Judy Ward, chair of the Senate Aging and Youth Committee, who has been a vocal opponent of legalization, held her own hearing on adult-use marijuana after she said the Senate Law and Justice Committee’s hearings failed to hear from both sides.

“The black market will always be out there,” Ward, a Republican from Cumberland County, told City & State.

“Don’t think for a minute that young people won’t get their hands on recreational marijuana, because we see what happens with alcohol … (Marijuana) just presents a whole host of problems that we haven’t yet really sorted out.”

On the other side of the argument, Mosteller said, concerns over the illicit market could be where smart pricing comes into play.

“The No. 1 thing that Pennsylvania can do to ensure that it undermines the illicit market that currently exists is to be intentional about its taxation structure and its regulatory structure,  and just ensure that the legal companies are able to effectively compete on a price point,” he said.

The commonwealth has the benefit of seeing other states’ growing pains as they develop their cannabis markets. States such as Colorado, which began legal sales in 2014, can provide an example of what not to do.

Trent Woloveck, chief commercial director at Jushi Inc., testified at the Feb. 25 Senate Law and Justice hearing that Colorado initially dealt with long lines and high prices, which led to consumers sticking to the cheaper illicit market. He noted that an eighth of an ounce of legal cannabis was going for $64.90, while people could get it on the street for half that price. Estimates showed that after Colorado’s initial launch eight years ago, the illicit market was still making up about 70% of cannabis sales in the state.

“I would point to tax structure and supply really being the two main drivers.”

Along with pricing, supply is another big part of the equation. In talking with both lawmakers and advocates, it’s clear that supply and competition will also play a pivotal role in the establishment of a quality market.

Mosteller said besides having a transparent and accountable regulatory system, any legalization policy should prioritize creating an equitable and competitive market for large and small growers alike.

“If a state is going to choose to move forward here, it needs to prevent its market from being an oligopoly that is controlled by just a few large companies and out-of-state operators,” Mosteller said. He noted that the medical marijuana market in Pennsylvania has become problematic, with local farmers and companies not being able to compete, and that the state can’t let those issues work their way into a potential recreational market.

Current legalization proposals have considerations for social equity licensees to benefit communities who were disproportionately affected by cannabis convictions. Mosteller said those proposals can go one step further.

Mosteller laid out four policies that could help the state avoid the mistakes of others who trip themselves up when launching their cannabis markets. Those policy options include avoiding arbitrary limits on the number of businesses that can operate in the market; allowing the number of licensed businesses to grow as market demand increases; having a level playing field for all applicants regardless of their involvement in the medical marijuana industry; and, along those same lines, prohibiting suppliers in the medical marijuana market to get a head start in securing a large portion of the market share before other competitors have an opportunity to join it.

Kilmer added that there are a variety of ways in which states can go about achieving social equity. It just depends on what lawmakers value the most.

“Especially, for a state like Pennsylvania, it would be worth it to actually do the analysis and be very specific about it,” Kilmer said.

“What are the goals of my social equity program? Is it to build wealth in communities that were disproportionately affected by cannabis prohibition? You can be very specific about what the goal is, look at all your policy levers, and then start doing some cost-benefit analysis.”

Unfortunately for advocates and supporters of legalization, pricing and supply are just the tip of the iceberg with cannabis legalization.

On top of the regulatory questions, there are a myriad of public safety and enforcement issues that have yet to be addressed. Among them are concerns about driving under the influence of marijuana and the ability to test if someone is intoxicated, individuals’ Second Amendment rights related to federal controlled substance laws, and where potential revenues should be allocated.

The General Assembly’s willingness to discuss the issues surrounding cannabis legalization is a promising sign for supporters, but that doesn’t mean any proposals will see a vote during this legislative session.

While Street thinks the time for legalization is coming, Ward said she doesn’t see the GOP-led legislature prioritizing the issue during this legislative session.

“I think there might be people who vote for decriminalization,” Ward said.

“I don’t see anywhere in the near future that we would be voting on (full legalization).”

With the General Assembly still learning about the topic and weighing its regulatory options, Street is hopeful his and Laughlin’s proposal can be the starting point for debate.

“I think what’s happening is there’s now a level of education around cannabis (that) makes people understand what a rational bill looks like,” Street said.

“I think our legislation does represent a compromise.”