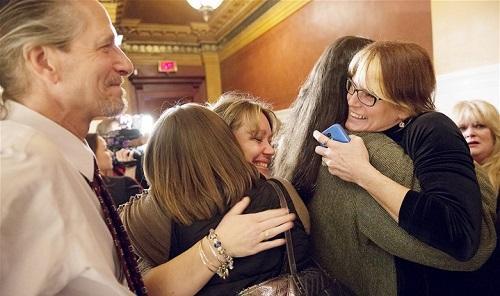 HARRISBURG — The House on Wednesday approved allowing the medical use of marijuana in Pennsylvania, sending the legislation to the Senate, which has approved medical cannabis bills in the past.

The vote was 149-43, with all voting Democrats and more than half of Republicans in support. Advocates and Gov. Tom Wolf applauded the House vote, which followed emotional debate from supporters and opponents alike.

Julie Michaels, who has traveled to the state Capitol from her home in Fayette County to advocate for medical marijuana, said she felt a “huge sense of relief that we got through the House, which had been our biggest stumbling block to this point.”

“Hopefully everything will be smooth sailing from here, straight to the governor’s desk,” said Ms. Michaels, whose daughter Sydney, 6, has Dravet syndrome, a form of intractable epilepsy.