Hot off the press cannabis, marijuana, cbd and hemp news from around the world on the WeedLife News Network.
1 minute reading time (131 words)
Featured

Ohio voters to decide on legalizing recreational marijuana use 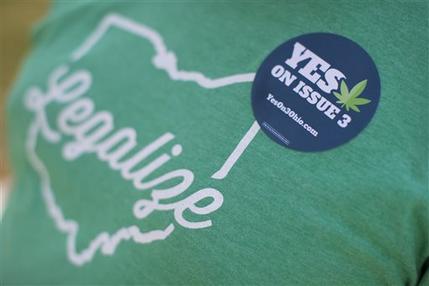 Ohio voters will decide on Tuesday whether to become the first U.S. Midwestern state to legalize the recreational use of marijuana, although a rival ballot measure could kill the law before it takes effect.

Issue 3 would add an amendment to the state constitution that legalizes both the personal and medical use of marijuana for those over 21 years old.
If it passes, Ohio would become the fifth and most populous state to legalize the recreational usage of marijuana, following Alaska, Colorado, Washington and Oregon, as well as the District of Columbia. About two dozen states allow its use for medical reasons.
Click here to read the complete article
Kim Palmer ~ Reuters ~
Tags:
Marijuana Legalization in Ohio, WeedWorthy Political News, Weed Worthy Law & Crime News, WeedWorthy US News, ResponsibleOhio, politics, Ohio, Ohio Legislation, Marijuana legalization as a political issue , Ohio Gov. John Kasich, Ohio's Issue 3, states legalizing marijuana,
×
Stay Informed

Colorado allowed to spend marijuana tax money, as ...
Wedding startups say ‘I do’ to cannabis