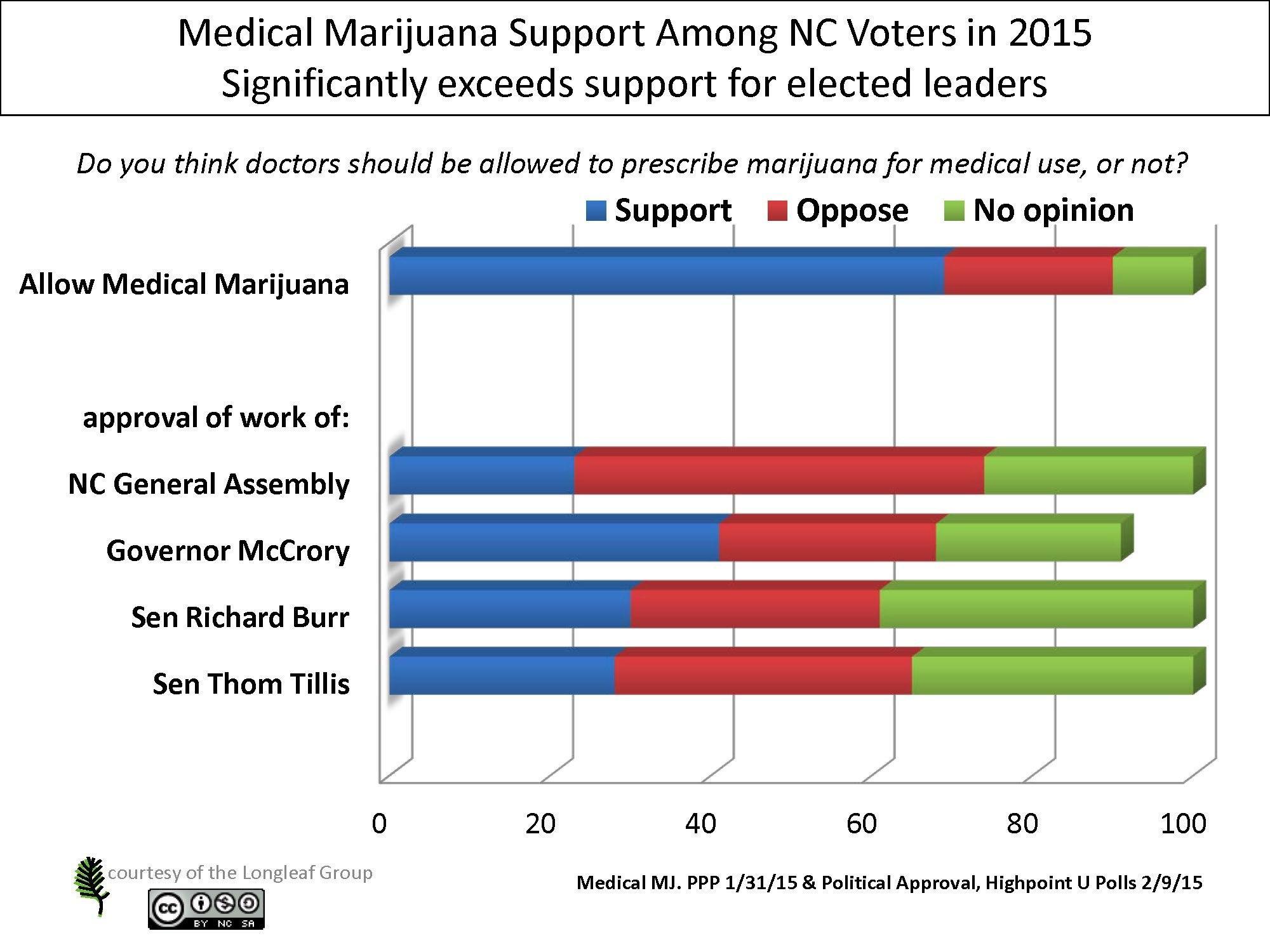 Max Hunt ~ Mountain Xpress
North Carolina could conceivably be one of the next states to legalize marijuana use for medicinal purposes, according to a report by higherperspective.com.

~
The website cites a bill, introduced by Representative Kelly Alexander in late January of 2015, that has passed its first reading in the North Carolina General Assembly. This comes on the heels of a decision by Gov. Pat McCrory last year to sign a law allowing limited use of cannabis derivatives to treat seizures.
Bill H78 states that “Modern medical research has discovered beneficial uses for cannabis in treating or alleviating pain, nausea, and other symptoms associated with certain debilitating medical conditions,” and also finds that “99 out of every 100 cannabis arrests in the United States are made under state law, rather than under federal law,” and suggests that legalization at the state level would protect the seriously ill from facing prosecution.
The bill also provides an outline for the legal cultivation and distribution of marijuana products for medical uses, according to The Marijuana Policy Project.
Medicinal products would go towards treatment of such physical and mental illnesses as anorexia, PTSD, Chrohn’s disease and cancer treatment, depending on patient.
“There is concern that people will use the law to get [prescriptions unethically], but that concern already exists in the prescription of medicine pill mills,” Robert Capecchi, deputy director of state policies for Marijuana Policy Project, told Higher Perspective. “In addition, marijuana is nonlethal and lacks the life-ending side effects that certain prescription medicines have.”
This isn’t the first time Rep. Alexander has introduced a bill on medical marijuana; a similar proposal in 2013 was shot down by the House Rules Committee within two weeks.
However, with other states like Colorado, Washington, and Alaska moving forward with the legalization of cannabis, Alexander sees this latest bill as simple progress. “It’s an inevitable thing,” he told The Daily Tar Heel in 2014. “Trying to stop that movement reminds me of somebody marching out to the beach, holding up their hand and saying the tide will not rise.”
While the tides may be turning in the discussion on legalized pot, some North Carolinians still worry that it’s the first step down a slippery slope. “Just because it is legal does not mean it is safe,” says Daniel Perry, Duke University’s Alcohol and Drug Program Coordinator, as reported by the Duke Chronicle. “Just because it is considered medicinal does not mean you shouldn’t be informed before putting it in your body.”
Buncombe County Sheriff Van Duncan also has reservations about the proposal, as stated to the Asheville Citizen-Times in a recent interview. “A lot of people think it’s no more harmful than alcohol,” Duncan said. “I would argue that marijuana is one of the most destructive drugs out there.” However, Duncan admitted that legalization is “probably going to continue to spread. Every time it happens in one state, it makes it harder for other states to enforce.”
Public opinion in NC on the bill varies depending on the source, but several posters on the Buncombe County Politics Facebook page and Reddit support the legalization of cannabis for treatment of certain illnesses. “I have seen how effective it can be with wounded and ill heroes at VA Medical Centers,” said Facebook poster Tom Aardema. “I’m for it.”
Bill H78 will now go to a special House Committee, which will conduct further studies into the proposal and offer amendments and recommendations to the bill before it comes up for consideration by the NC House of Representatives.
Learn more from NC NORML here.
More on the NC General Assembly Law-Making Process.
~
Tags:
Legalizing Marijuana in North Carolina, WeedWorthy Political News, Weed Worthy Law & Crime News, Max Hunt,
UN drugs body warns US states and Uruguay over can...
Cannabis moderately impairs driving

You can’t be fired in N.J. for failing drug test because of medical marijuana, court rules - Cannabis News

Year after Philly pot law changed, arrests are down