Hot off the press cannabis, marijuana, cbd and hemp news from around the world on the WeedLife News Network.
5 minutes reading time (1067 words)

No More Marijuana For Tourists In Amsterdam Post-Coronavirus

“Cannabis tourism” may be coming to an end in Amsterdam if the environmentalist mayor Femke Halsema gets her wish to ban foreign tourists from the city's coffee shops by the time coronavirus travel restrictions are lifted.

It’s no secret that the city’s first female mayor, along with many locals, simply has had enough of "the power of attraction of Amsterdam as a holiday resort for soft drug tourism," as Halsema wrote in a recent letter to her city council, included in her new plan expected to be passed that would permit marijuana product sales only to Dutch nationals and residents of the Netherlands.

A total of 46 million people visited the Netherlands in 2019, with most coming to Amsterdam and many buying and smoking cannabis at the marijuana shops.Before Covid-19 lockdowns, the euphemistically-called coffee shops, along with the renowned red-light district, attracted more than one million visitors a month — more than its permanent population. 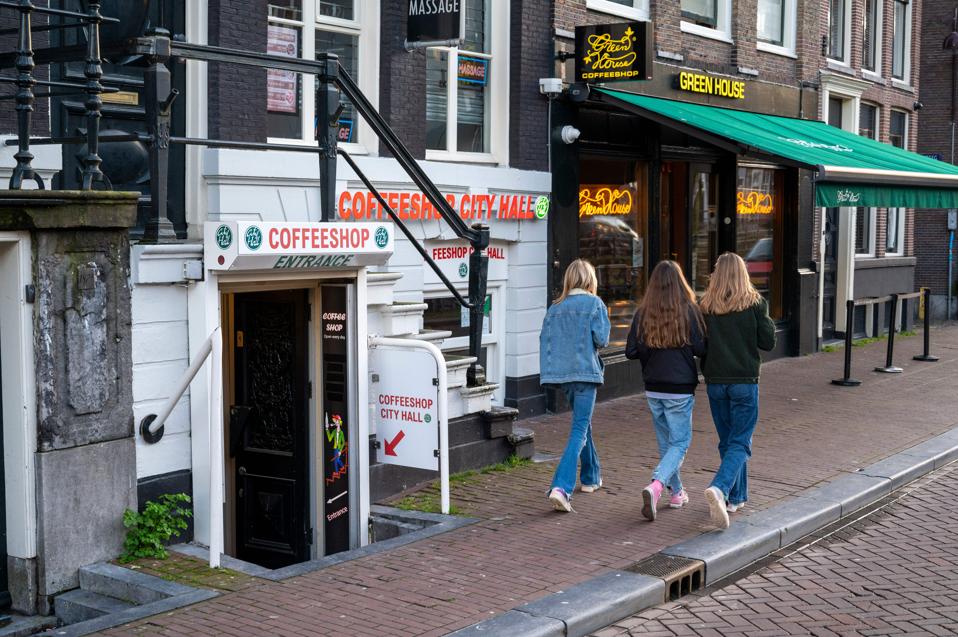 Pedestrians passing coffee shops in the city center on January 8, the day the mayor proposed banning ... [+]

“The Dutch city, in an effort to crack down on growing numbers of low-budget “drug tourists” and organized crime, plans to forbid the sale of marijuana to foreigners in its famed coffee shops,” writes The New York Times.

This time, the public prosecutor and the police are supporting the mayor’s move. The business community, particularly in the city center, has joined them, although in the past it opposed any drastic controls. That position has softened as many entrepreneurs want to change Amsterdam’s reputation as a place for unrestricted access to sex and drugs.

There’s a drive in the city, known for its liberal attitude regarding drugs and its red-light district, to control the flow of young tourists who arrive with the single intention to smoke marijuana — and to undermine the criminal organizations behind the drug trade.

The proposal follows the example of other cities in the south of the Netherlands including Maastricht and Den Bosch, which saw their coffee shops getting overloaded by visitors from Germany, France and Belgium and, as a result, already have banned tourists from their cities’ coffeeshops.“We can be an open, hospitable and tolerant city, but also a city that makes life difficult for criminals and slows down mass tourism,” said Mayor Halsema. 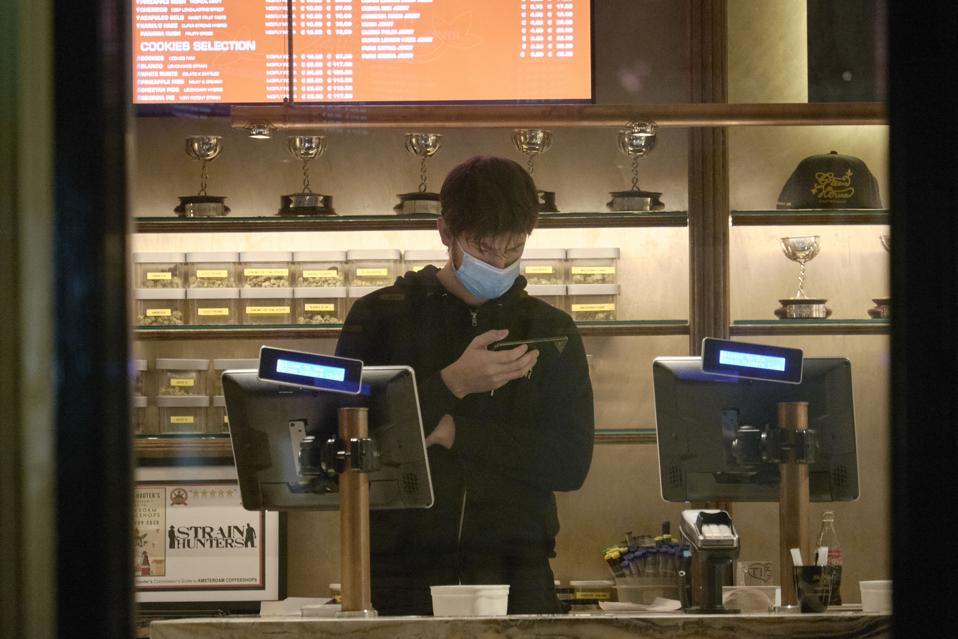 A salesperson in a coffeeshop in Amsterdam. Face masks are compulsory in marijuana shops as in all ... [+]

Cannabis trade has become “too big and overheated,” the mayor has said repeatedly during her campaign to change the fact that Amsterdam, @visitholland, is mostly known as "a place of soft drugs tourism" and a haven for cannabis users around the world.

Instead, she wants to return the city to its international renown as one of the most beautiful in the world with multiple other first-class attractions.

The shops have been allowed to remain open during the COVID-19 pandemic, but customers have to take their purchases outside.

A never-ending and growing demand

The demand for cannabis has kept growing year after year, despite official efforts to promote other tourist activities and to control the numbers of hotels and Airbnb rentals, with "cannabis tourists" being a nuisance particularly around the city center.

Amsterdam wants to reduce the flow of visitors and improve the quality of life for residents. The intolerable masses of budget tourism have exploded over the years as cheaper flights made it a popular weekend destination.

“Amsterdam, like Barcelona and Venice, is having an increasingly difficult relationship with many such visitors amid complaints that, among other things, they are inundating historic districts and that short-term accommodation aimed at them is causing housing shortages for local residents,” reports The New York Times.

According to research commissioned by the local government, for 57% of foreign visitors, a trip to a coffee shop was a “very important” reason for their arrival.

“Coffee shops, especially in the center, largely run on tourists,” Halsema said. “The increase in tourism has only increased demand” and attracted hard-drug criminality in the process.

More than sex and drugs

While the tourism collapse from the pandemic has hit the city’s budget, Amsterdam’s mayor is determined to reshape the sector once the crisis eases. Being shut out of the freewheeling marijuana trade could discourage a large number of potential revelers.

“Amsterdam is an international city and we want to welcome tourists, but we would like tourists who come for the wealth of the city, for its beauty, for its cultural institutions,” Halsema told Dutch public television.

According to the Ministry of Public Health, the Netherlands has 570 coffeeshops — 166 of them (30%) in Amsterdam.

Since the 1970s, the Dutch government has tolerated these establishments and Amsterdam in particular has promoted cannabis culture with other activities such as hosting the Cannabis Cup festival for decades.

That ‘laissez fair’ attitude has permitted the coffee shops to become a key tourist attraction with often-shady and powerful interests operating behind the scenes.

The new plan presented to the Amsterdam City Council last week is aimed at tackling the flow of hard drugs and organized crime linked to the marijuana trade.

“I want to shrink the cannabis market and make it manageable,” the mayor wrote. “A far-reaching plan, but I see no alternative.”

Of the 166 coffee shops licensed in Amsterdam, 68 would be enough to support local demand according to the new plan, the official study indicates.

In a contradictory model, despite the legality of coffeeshops, the production of cannabis and its supply has always been illegal in The Netherlands at the same time that possession of fewer than five grams (0.18 ounces) was decriminalized in 1976 under a so-called "tolerance" policy.

Studies have shown that tourism would decline sharply if foreigners are banned from the coffee shops. But for the mayor, determined to reshape the sector once the crisis eases, it’s a reasonable price to pay for having been too tolerant in the past.