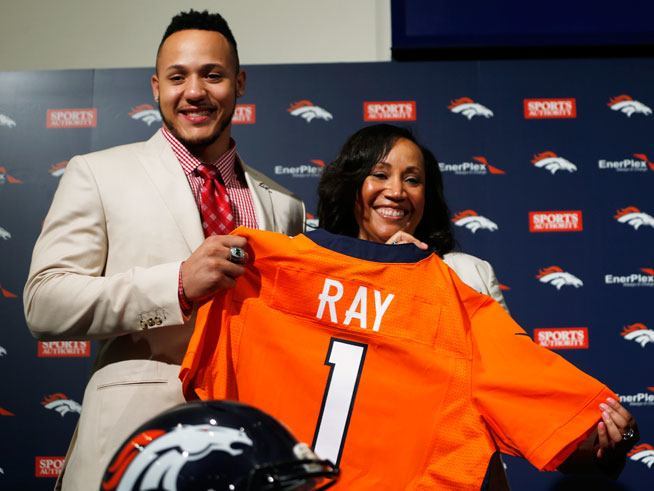 Mark Kiszla ~ The Denver Post ~
Let's call a cease-fire on the NFL's senseless war against marijuana.

~
When Broncos rookie Shane Ray messes up and gets pulled over by police with 35 grams of marijuana in his car, he needs to answer to his mom, not NFL commissioner Roger Goodell.
"My mom just started crying," Ray said, when I asked how he broke the news to Sebrina Johnson about getting busted for pot possession 80 hours before the draft's opening bell.
"And when something like that happens, you understand that it was such a disappointment. But, even through that, she said we were going to get through it. She backed me. All anybody could ask for is forgiveness when they make a mistake, and my mom forgave me."
The Broncos also forgave Ray and, in the process, reminded us that winning the Super Bowl isn't a merit badge project for Boy Scouts. On a dank and rainy spring night in Colorado, Denver picked Ray in the first round, and all anybody wanted to talk about was weed.
"I refuse to let people characterize me as a drug addict," Ray said, during his first tour of Dove Valley headquarters.
The Southeastern Conference's defensive player of the year dropped from a top-10 selection in the draft to No. 23 without Ray so much as inhaling. Yes, there was less than 35 grams of marijuana found in his vehicle.
"I think it was the timing of my incident that made it so extreme. Already being under a microscope in my position and then having it happen three days prior to the draft gave a lot of fuel to criticize me and my judgment," Ray said.
Know what's stupid? In the name of protecting the NFL shield, players and teams alike have to go through a charade of apologizing for marijuana's presence in football culture, treating a drug used by bankers and bus drivers as if weed were an agent for the devil.
"I think in life everyone makes mistakes, and unfortunately I made a terrible decision on Monday, which could have possibly cost me my career," Ray said. "But when that happened, I also realized that this can be taken away from me at any point in time. Just the feelings I had when I felt like everything was over, I never want to feel that again. I can assure people that I won't jeopardize my career, and I will continue to grow as a person."
Scared straight? Or does Ray's vow smell of balderdash? Even if you doubt him, he's guilty of no more balderdash than what almost any college student utters after a night of fun ends at dawn with red flashing lights in the rearview mirror.
So riddle me this: How many of the 31 other first-round picks in the 2015 NFL draft do you think have smoked marijuana? Fifty years ago, it was smuggling cases of Coors out of the Rocky Mountains under a blanket in the back of a pick-up truck. Now, the rest of the USA can blame Colorado for spreading sticky icky throughout the country.
During the past 12 months, thanks to everybody from Ray Rice to Aaron Hernandez, pro football has given America a chance to have gut-wrenching discussions on social issues from domestic violence to the entitlement that can cause an athlete to believe it's possible to get away with murder.
But, for more than a year, forward-thinking NFL leaders such as Seattle Seahawks coach Pete Carroll have been advocating that marijuana be studied by the league for its potential benefits as a natural medicine rather than reefer madness to be punished with a suspension for repeat offenders.
As Ray joins the Broncos, there are no guarantees he can take playing time from veteran linebacker DeMarcus Ware, but the rookie is assured of being placed in the league's substance-abuse program and having to deal with regular drug-testing for 90 days.
Who's in charge of this clam bake, commissioner Goodell?
Within NFL culture, green buds are as common as Bud Light.
Nobody is asking Goodell to inhale from the peace pipe, but if his league wants to join the 21st century, it will decriminalize marijuana.
Stop the war on weed. The NFL has far bigger battles to fight.
~
Tags:
WeedWorthy Marijuana Legalization News, WeedWorthy Medical Marijuana News, WeedWorthy Sports News, WeedWorthy Cannabis Industry News NFL Marijuana Leglization, NFL Marijuana Use, Mark Kiszla, Shane Ray,
New Jersey parents sue to allow daughter to use me...
How The Tesla Battery Will Benefit Marijuana Growe...