Hot off the press cannabis, marijuana, cbd and hemp news from around the world on the WeedLife News Network.
4 minutes reading time (800 words)

Democrats are definitely going to attempt to pass marijuana reforms, but those moves have to coincide with the president’s agenda.

Cannabis advocates are eager to watch the course of federal marijuana reform in 2021. One way or another, it’s coming. Newly positioned Senate Majority Leader Chuck Schumer said earlier this week that the issue is still a top priority for Democrats as they advance through the session. Only nobody really has any idea what to expect from the 117th Congress concerning cannabis.

Schumer has suggested the reform might be part of a racial justice bill, while more optimistic outsiders believe that full-scale legalization is just around the bend. There are just so many variables that could affect the outcome of the marijuana movement this year on Capitol Hill. But that doesn’t mean the industry doesn’t have some predictions for what America can expect.

If you’re anticipating full blown marijuana legalization soon, don’t hold your breath. That’s probably not going to happen, at least not this year. Instead, Tilray CEO Brendan Kennedy believes it will take the new Democratic-controlled Congress a couple of years to gain the support needed to take marijuana reform all the way. “I expect that pressure from the North and the South will ultimately lead the U.S. to implement a federal program here at some point in the next 18 to 24 months,” Kennedy said during a recent interview on CNBC’s “Squawk on the Street.”

Others aren’t convinced that federal marijuana legalization isn’t possible this year. But they believe the pathway will probably start out slow and progress into more widespread reform. “Full legalization is possible, but moving any major legislation through Congress is challenging,” Steve Fox, strategic adviser to the Cannabis Trade Federation, told Marijuana Business Daily. “And I’d expect it might be an uphill fight during the current session, but not impossible. I’m very optimistic.”

We know that Senate Majority Leader Schumer has been gunning for nationwide marijuana legalization for the past few years. Last October, he told a podcaster that a federal marijuana legalization proposal would get some attention if the Democrats gained control of the Senate in the 2020 election, and that it would likely secure the necessary votes to pass. But his words may have been a tab bit ambitious at the time. Democrats are definitely going to attempt to pass marijuana reforms, but those moves have to be done to coincide with the president’s agenda…if they want them to pass. 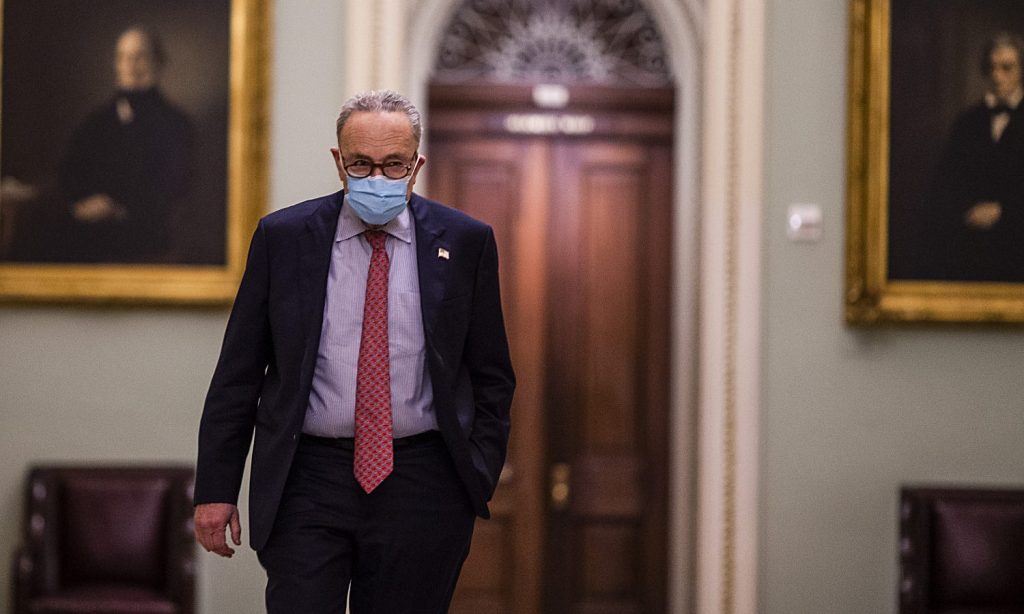 As of last year, Biden was not sold on the idea of establishing a taxed and regulated marijuana market, but he is all in favor of eliminating the criminal penalties associated with small time possession. It’s for this reason that we will likely see Democrats pushing legislation that addresses decriminalization. As Schumer mentioned this week, they may stick it inside a racial justice bill and call it a day.

Some smaller reforms that Congress could also attempt may include the SAFE Banking Act, which would allow banks to do business with the cannabis industry. They might take action to prevent the Justice Department from going after companies associated with the legal cannabis trade. We could also see more marijuana-related initiatives tucked inside spending bills.

Federal lawmakers will need to test the water while they figure out how to navigate the issue in the most productive way. Because even with the Democrats now having control in both chambers, the majority is so slim that it doesn’t give them the power to just wave a magic wand and turn the state of marijuana prohibition on its head. The issue will require some finesse, and national cannabis advocates say we shouldn’t expect miracles. “I hope people have realistic expectations,” said Mike Correia, lead lobbyist for the Washington DC-based National Cannabis Industry Association.

Even national marijuana reform group NORML doesn’t have a steady hypothesis for how marijuana will fare in 2021. “With so many issues facing the Congress and many complex procedural factors facing the chambers, it would be all too easy for these efforts to be lost in the haze,” Justin Strekal, political director for the cannabis advocacy organization, wrote in a column for the Hill.

Again, marijuana reform could go so many different ways in Congress this year that it is impossible to tell at this point how it will pan out. We should have a better idea in the coming months.