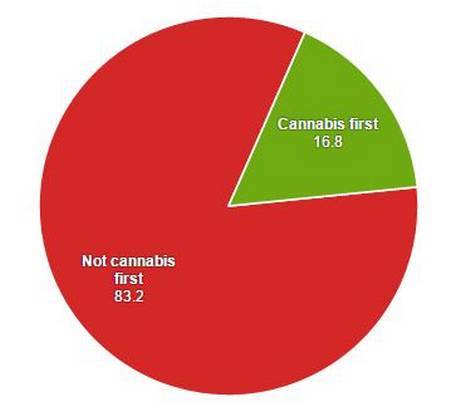 ~
Because if we're to, as Obama put it, "follow the science not the ideology" with regards to marijuana and have some hope of getting it decriminalised/legalised on a wider scale in the world, we must continue to dispel the myths surrounding it.
A chief one, regurgitated time and time again, is that weed is a 'gateway drug', a slippery slope to more damaging drugs. But is this really the case?
Data from the US's 2012 National Survey on Drug Use and Health shows that 60% of cannabis users go on to try other drugs. That might seem to prove that yes, it is, except that 88% of drug users started with alcohol.
As The Atlantic notes, half of drinkers don't go further than alcohol, compared to 40% of marijuana users, but alcohol use tends to precede marijuana use and is at the head of the chain.
In other words, yes, marijuana is to an extent a 'gateway' drug (if it feels nice, you're probably going to try others) but no more so than alcohol, which is the real catalyst for people trying new psychoactive substances – a drug that is completely legal.
It makes graphics churned out like this look pretty dumb:
What happens if marijuana is legalized? pic.twitter.com/cLc0nsQCcr
— DrugFreeAmerica (@DrugFreeAmerica) February 5, 2014
pic.twitter.com/cLc0nsQCcr
'Gateway' is a problematic word too, as marijuana use (incidentally, 114 times less deadly than alcohol) is not a tipping point but simply part of a process, analogous to progressing from a starter to a main.
As The Atlantic put it: "Marijuana isn't a 'gateway' to harder drugs in the same way that ordering an appetizer isn't a 'gateway' to an entree: One comes before the other, but you're eating both because you're already at the restaurant."
Studies into the gateway hypothesis are lacking, but another crucial element is marijuana's illegality. Make it illegal and people are more likely to try other illegal substances, make it legal and people are more likely to make a distinction between it and harder, more addictive drugs.
The science points to weed being pretty harmless, but any dangers it does pose, ironically for its detractors, are only made worse by keeping it banned.
~
Tags:
WeedWorthy Marijuana Legalization News, WeedWorthy Science News, WeedWorthy Cannabis Industry News Christopher Hooton, Gateway Drugs, addictive drugs, alcohol,
Legislators Say Marijuana Reform Could Ease Tensio...
Marijuana entrepreneurs to vie for investor dollar...