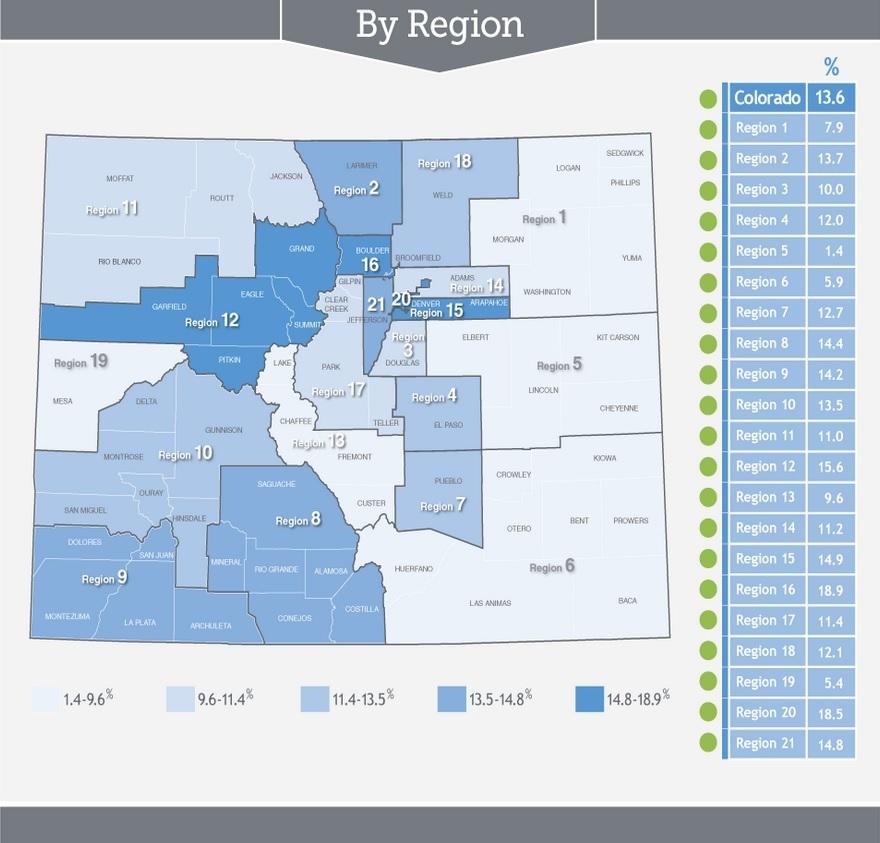 Michael Roberts ~ Westword ~
Colorado Department of Public Health and Environment is the state agency that most frequently raises alarms about marijuana use.

~
No surprise, then, that the CDPHE's new survey of marijuana use cites concerns about the percentage of children exposed to marijuana and the decreasing age at which individuals are reportedly trying cannabis for the first time.
What is unexpected, however, is the number of Coloradans who currently identify themselves as cannabis users: 13.6 percent of adults over the age of eighteen.
How does that compare to marijuana use elsewhere in America? We located a national Gallup survey from July 2013 that found 7 percent of respondents — 8 percent of men and 6 percent of women — said they smoked marijuana. By that measure, the Colorado number is nearly double the national average. And while these aren't current numbers, Gallup noted that the 2013 results were little changed since the 1980s despite legalization of medical marijuana in many states and limited recreational sales in Colorado and Washington.
Don't expect the health department to celebrate this news. In a February report, the CDPHE listed a slew of negative consequences associated with marijuana use. Here's a summary of that document's findings:
• The risk of a motor vehicle crash doubles among drivers with recent marijuana use. Using alcohol and marijuana together increases the risk of a motor vehicle crash more than using either substance alone.
• Marijuana smoke, both firsthand and secondhand smoke, contains many of the same carcinogens found in tobacco smoke.
• In adults, heavy use of marijuana is associated with impaired memory, persisting a week or more after quitting.
• Maternal use of marijuana during pregnancy is associated with negative effects on exposed offspring, including decreased academic ability, cognitive function and attention. Importantly, these effects may not appear until adolescence.
• Marijuana use by adolescents and young adults - even occasional use - is associated with future high-risk use of alcohol, tobacco and other drugs such as cocaine, Ecstasy, opioids and methamphetamine.
• Starting marijuana use during adolescence or young adulthood is associated with future marijuana addiction.
• Regular marijuana use by adolescents and young adults is associated with impaired learning, memory, and math and reading achievement, even 28 days after last use. These impairments increase with more frequent marijuana use.
• Regular marijuana use by adolescents and young adults is strongly associated with developing psychotic symptoms and disorders such as schizophrenia in adulthood, and this risk is higher among those who start using marijuana at a younger age. Additionally, this risk is higher with more frequent marijuana use.
The latest analysis was conducted under the auspices of the Colorado Behavioral Risk Factor Surveillance System (BRFSS), described by the agency as "a system of telephone surveys sponsored by the Centers for Disease Control to monitor lifestyles and behaviors related to the leading causes of mortality and morbidity."
The survey found that 13.6 percent of adults eighteen and above currently use marijuana, while 12.9 percent of those 21 and over do so. Among current users, 33.2 percent of those surveyed said they used marijuana daily, while 18.8 percent "reported driving after using."
Additionally, 6.9 percent of parents with children ages one to fourteen maintained that they had marijuana around the home, with only 71.3 percent of them saying they kept it locked away. Use among responding parents broke down like so: 76.4 percent smoked it, 38.5 percent vaporized it and 14.2 percent ate it. (Presumably, there's some crossover between these numbers, with a certain percentage consuming cannabis in multiple ways.) The CDPHE adds that 3.9 percent of children between one and fourteen live in homes "where marijuana had recently been used inside."
~
Tags:
WeedWorthy Marijuana Legalization News, WeedWorthy Science News, WeedWorthy Cannabis Industry News Michael Roberts, Marijuana Use by Colorado Region Colorado Behavioral Risk Factor Surveillance System, Colorado Department of Public Health and Environment, CDPHE, BRFSS,
Oregon launches 'Educate Before You Recreate' mari...
Georgia opens medical cannabis registry