Hot off the press cannabis, marijuana, cbd and hemp news from around the world on the WeedLife News Network.
1 minute reading time (262 words) 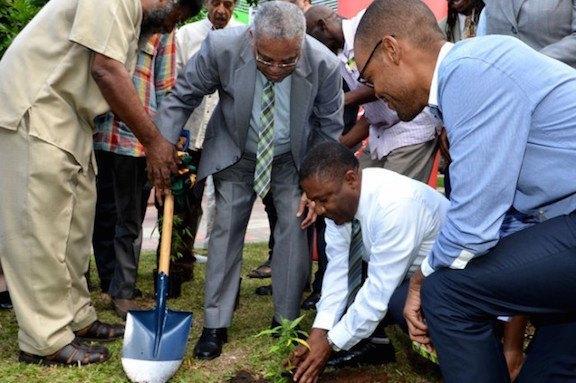 By the Caribbean Journal Staff ~
The first legal cannabis plant in the country was planted on the grounds of the University of the West Indies Mona campus.

~
The University has been accorded an order by the government to cultivate marijuana for medical research and to “set the pace for the development of a legal cannabis industry.”
That follows the passage of the Dangerous Drugs (Amendment) Act 2015, which recently became effective and provides for the development of a medical marijuana industry in the country.
A similar licence will also be granted to Jamaica’s University of Technology, according to a statement from the government.
“I want to know when you start to do the experimentation, and what is found in the plant,” Science Minister Philip Paulwell told researchers. “We have to start this way, so that we can set the stage for full commercialization.”
Justice Minister Mark Golding, who was also on hand for the ceremony, said the university had a “fine team of scientists across different scientific disciplines.”
“Now that they can actually cultivate for research purposes, we can expect that the outcomes of the endeavours will be more profound, and with the economic opportunities that this will bring, we see this as part of what, I hope, will be a transformational industry for Jamaica,” he said.
Jamaica’s recent legislative changes include partial decriminalization of small amounts of the drug and loosened restrictions on medical marijuana.
~
Tags:
WeedWorthy Marijuana Legalization News, Jamaica Marijuana Legalization, WeedWorthy Medical Marijuana News, WeedWorthy World News, Legalized Marijuana
×
Stay Informed

In Our View, A Simple Fix For Marijuana
Rising marijuana sales leave pot shops flush with ...