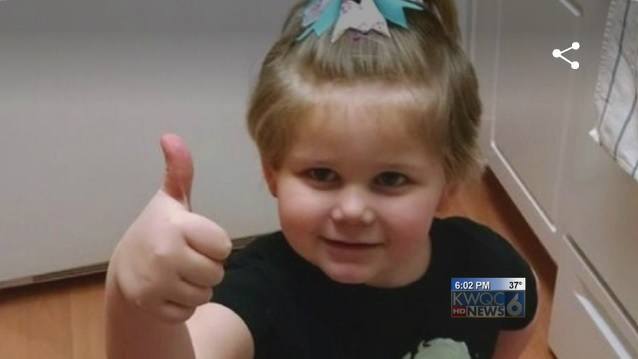 Brian Boesen ~ KWQC
DENVER, Co. – When Jessica Eberhart realized she couldn’t treat her daughter’s cancer with cannabis oil in Iowa, she and her family packed their bags and moved to Colorado.
~
http://kwqc.com/2015/02/24/mom-says-cannabis-oil-helping-qca-girl-with-cancer/
Her daughter, 3-year old Hannah Eberhart, was diagnosed in December with anaplastic large cell lymphoma. She’s receiving chemotherapy treatments at Rocky Mountain Hospital for Children in Denver.
Outside the hospital walls, her mother is giving her a small daily dose of cannabis oil that she says is making a difference.
“I think it gives her a fighting chance and it gives her and I think it’s just made her sail through this,” said Eberhart.
Jessica says she’s seen a positive change in Hannah’s symptoms since beginning the cannabis oil in January.
“She’s eating, she’s sleeping, she’s happy, her anxiety is lower,” said Eberhart. “There’s so many benefits. Anybody that knows Hannah and can see her, would never know that she even has cancer. She’s so spunky and so happy all the time.”
Jessica says the family got amazing news this week: Hannah’s cancer is now in remission.
“I thought we were going to have to use so many different prescriptions to be able to keep in check and the balance it’s created for her, has just been extraordinary,” said Eberhart.
Back home in Iowa, only patients with severe epilepsy qualify to use cannabis oil and there’s no way to legally get it. Lawmakers are considering changes to the law which might make it easier to obtain.
“It’s a lot of frustration. It’s a lot of frustration because this is something that needs to be done for everybody,” said Eberhart.
Last week, Iowa Governor Terry Branstad suggested Iowans who qualify, might be able to get cannabis oil in Illinois where it’s legal to produce but current laws won’t allow medical marijuana across state lines.
So for now, Hannah and her family say they’ll stay in Denver for treatment.
“I don’t know that we’ll be coming back to Iowa until they change the law,” said Eberhart. “This is reality and this is where we’re headed so we need to accept this and we need to jump on it because it’s helping people like crazy.”
Hannah is currently receiving her third of six cycles of a special chemotherapy that targets her specific type of cancer.  She receives a dose each of the first 5 days of a 21-day cycle.
You can get more updates on Hannah’s journey by liking the “Hope for Hannah” Facebook page.
~
Tags:
Cannabis Legaliazation, CBD Oil, WeedWorthy Medical Marijuana News, Brian Boesen,
Why conservative Alaska legalized marijuana. Who's...
Marijuana vending machine makes debut in Seattle's...

Use of CBD May Be Associated With Reduced Alcohol Intake, New Study Shows