Hot off the press cannabis, marijuana, cbd and hemp news from around the world on the WeedLife News Network.
4 minutes reading time (774 words) 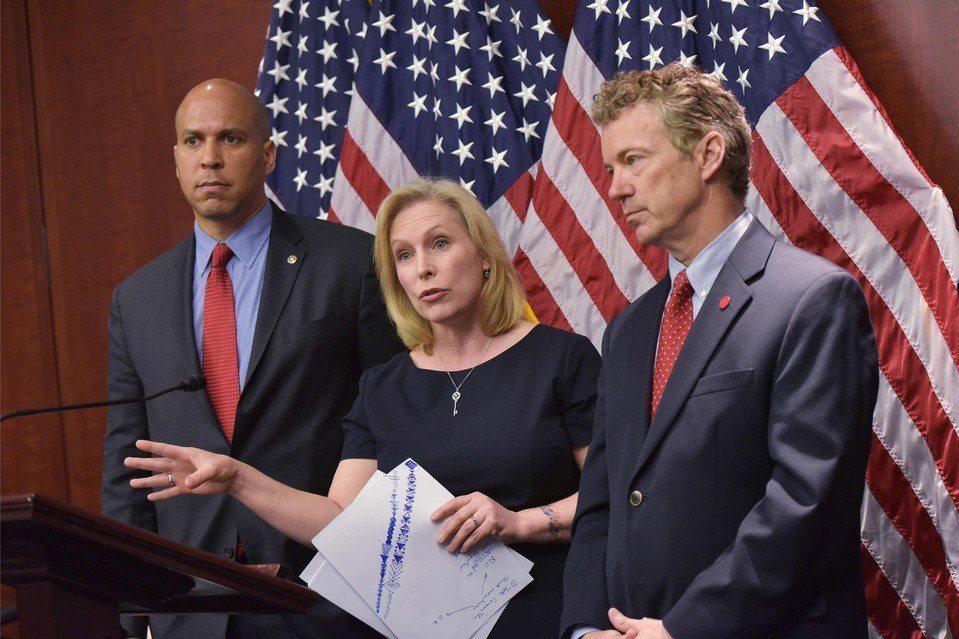 ~
When Sens. Cory Booker (D., N.J.), Kirsten Gillibrand (D., N.Y.) and Rand Paul (R., Ky.) announced a bill Tuesday to reform federal marijuana regulation, they pitched it not just as a health, military veteran and states’ rights issue, but from a business angle. And they used words that investors in the developing marijuana industry have been waiting to hear for a long time.
“This is very, very encouraging,” said Alex Thiersch, a managing partner at Salveo Capital, a Chicago firm in the process of raising a potential $25 million fund to invest in marijuana businesses. “This opens many, many doors for us to pursue opportunities.”
The proposed Compassionate Access, Research Expansion and Respect States, or Carers, Act would redefine cannabis as a Schedule II controlled substance from its current position under Schedule I, a classification that puts the drug in the company of heroin, LSD, peyote, methaqualone and ecstasy as having “no currently accepted medical use in the United States” under federal guidelines. It also would amend the Controlled Substances Act to allow states to set their own medical marijuana policies.
For marijuana businesses, this means private banks and other financial service providers would be free to open accounts for them without fear of federal prosecution. The Treasury Department and Justice Departments issued guidelines in 2014 allowing banks to provide services to marijuana businesses in states that had legalized it, but many banks remained skeptical as long as the federal restrictions remained on the books. Medical marijuana has been approved in some form in 23 states, the District of Columbia and Guam.
“I just came back from Colorado, and the biggest thing [marijuana entrepreneurs there are] asking me is ‘We want banking to be legal. We’re legitimate enterprises now. We want to be able to put our money in a bank,’ ” Sen. Paul said at Tuesday’s news conference disclosing the bill.
In an effort to make the pro-business case for the proposal, the news conference included a statement from Corey Barnette, the owner and president of Washington, D.C., medical cannabis cultivation business District Growers LLC, who enumerated the restrictions his company operates under federal law.
“There’s no debt financing. There’s no working capital. There are no credit cards. There are no corporate debit cards. That means that you don’t buy anything over the Internet,” said Mr. Barnette.
The federal law has prevented at least some direct investment in the industry. While Salveo is looking to pursue investments in growing and distribution operations, a larger firm with a portfolio of active investments, Privateer Holdings Inc., has limited its deals in the U.S. to ancillary businesses in the marijuana industry, such as Leafly, an online resource for information and reviews on cannabis dispensaries and strains.
“We’re thrilled to see a bipartisan bill on this issue,” said Brendan Kennedy, Privateer’s chief executive. “For us, it would open up the possibility of direct investment in companies involved in the handling and growing of this product in the U.S.”
Mr. Kennedy said his firm has looked at hundreds of U.S. companies involved in growing or distribution but won’t invest in these businesses under current federal law. Privateer is involved in growing marijuana in Canada, where the firm operates its Tilray medical cannabis business in British Columbia. In January, Privateer received an investment from venture-capital firm Founders Fund, putting the company near a $75 million fundraising goal.
While some other efforts to reform federal marijuana laws have failed in Congress, marijuana industry participants and advocates said there is reason for them to be optimistic about the bill.
“It’s likely to have a good chance of passing,” Mr. Kennedy said.
As with Salveo’s Mr. Thiersch, Mr. Kennedy cited how the bill was crafted to appeal both to advocates for decriminalization on the left and to conservative proponents of states’ rights and veterans issues. The bill could allow doctors at the Department of Veterans Affairs to prescribe cannabis.
“It has a real chance of making it through the Congress,” said Ethan Nadelmann, executive director of the Drug Policy Alliance, a group advocating reform to drug laws. “Three years ago, it would have been unthinkable to have three nationally known senators sponsor what is essentially an omnibus reform bill for federal marijuana law.”
~
Tags:
WeedWorthy Marijuana Legalization News, Marijuana Laws, WeedWorthy Finance News, Marijuana Legalization in the US, Thomas Dunford, Cory Booker, Kirsten Gillibrand, reform federal marijuana regulation,
×
Stay Informed