Hot off the press cannabis, marijuana, cbd and hemp news from around the world on the WeedLife News Network.
3 minutes reading time (510 words) 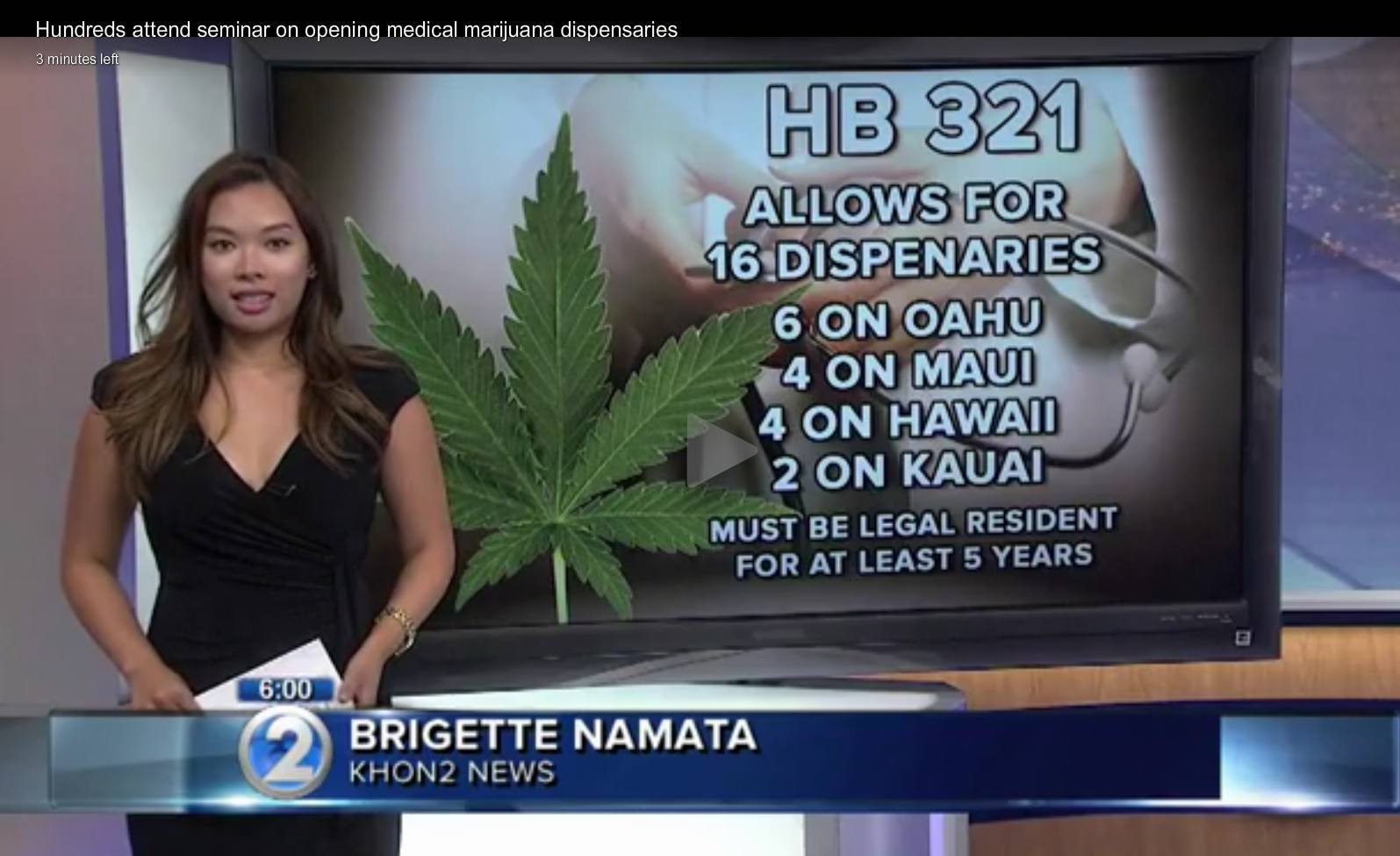 Brigette Namata ~ KHON2 ~
Medical marijuana is a multibillion dollar industry and hundreds of hungry entrepreneurs are ready to make it a reality in Hawaii.

~
Click Here to wach the video
It’s up to Gov. Ige to sign it into law, but in the meantime, hundreds attended a seminar on Oahu Saturday to learn about the risks and necessary steps needed to open a medical marijuana dispensary.
If medical marijuana becomes legal, Hawaii as a whole will have 16 dispensaries: six on Oahu, four on Maui, four on Hawaii Island and two on Kauai.
To open a dispensary, you must be a legal resident of Hawaii for at least five years, and an applicant must also have at least over $1 million in the bank.
Hundreds of interested entrepreneurs want it, but only eight will get a dispensary license. Each license would allow for two retail locations and two grow sites.
According to Myles Breiner, president of the Hawaii Association Criminal Defense Lawyers, it won’t be easy to obtain a license. “There’s a great deal of money to set up a fund,” he said.
The Department of Health is calling the shots and will decide who gets the license. But it’s a risky business venture, so how profitable can it be? Rep. Marcus Oshiro (D, Wahiawa, Whitmore Village, Laulani Valley) said “you’re talking about a substantial amount of money, in the millions of dollars.”
Those willing to take the risk brought along their attorneys, who say the medical marijuana industry is a new challenge.
“In Hawaii, we’ve got a real problem,” said attorney Keith Kiyoshi Suzuka. “I’m with a law firm here in Hawaii, and the issue is it’s not clear whether or not lawyers can represent medical marijuana business operators without risking jeopardizing our licenses.”
“This is such a new era of public policy,” said Oshiro. “I have a lot of concern of how it’s going to operate on a ground level and whether people are going to make money, people get hurt, and whether or not this is good for Hawaii.”
And while attorneys try to navigate what they call the grey area of the medical marijuana industry, some also wonder where will the dispensaries be located?
“The location has to comply with public safety,” said attorney David Cain. “Locations are not going to be close to schools, not going to be probably in residential areas, but more in commercial areas, maybe Kakaako, Ala Moana area, even towards Waikiki.”
Cain, whose practice is in Maui, said there’s talk of placing medical marijuana dispensaries near the airport as well as downtown Wailuku.
“If you’re going to get in this industry, you have to know what you’re getting into,” Oshiro said. “You have to understand, under the federal law, marijuana is still illegal.”
~
Tags:
WeedWorthy Marijuana Legalization News, Marijuana Legalization in Hawaii, Medical Marijuana Dispensaries, WeedWorthy Medical Marijuana News, WeedWorthy US News, WeedWorthy Cannabis Industry News Brigette Namata,
×
Stay Informed

Colorado hemp grows from novelty to industry with ...
Marijuana Dispensaries In B.C. Have An Image Probl...