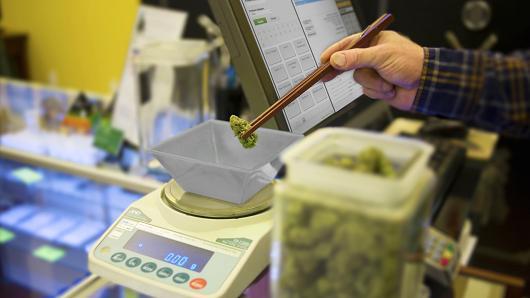 Bob Woods ~ CNBC
Telluride, Colorado, a former silver-mining town in the San Juan Mountains, is known these days for its ski resort and film and music festivals, though not as a high-tech incubator.

~
Still, it's where a couple of techie entrepreneurs were living and working in 2009 when a controversial state law presented them with a unique business opportunity.
"She had a Web-development firm, and I had an IT company," said Jessica Billingsley, referring to her now-partner Amy Poinsett. They knew each other socially and had some clients in common—real estate agencies, restaurants and other local small businesses—though they didn't work together directly. That is, until an amendment to Colorado's medical marijuana legalization law, implemented in 2001 but with narrow distribution, OK'd the opening of retail dispensaries where patients could have their pot prescriptions filled.
"A client of mine opened one of the first dispensaries in Boulder, and I invested in the business," Billingsley said, adding that she was asked to recommend a software platform to run the operation. She mentioned that to Poinsett, and the two agreed to join forces to launch a business called MJ Freeway and develop their own SaaS software platform for marijuana retailers, designed not just for Billingsley's client but also the many other dispensaries opening statewide.
By 2010 they had a working product and began licensing it to medicinal pot shops. "That's when we quit our other jobs and doubled down on MJ Freeway," Billingsley said, mentioning the name of their venture.
"We have very complimentary skills in terms of our tech backgrounds, and work very well together," Poinsett said, "so it was a great opportunity to build something from the ground up. It was exciting then and continues to be exciting now."

Today 23 states and the District of Columbia have legalized medical marijuana, and four states—one being Colorado—and DC have legalized adult recreational use of cannabis, in both plant and edible forms. MJ Freeway serves more than 1,000 clients in 19 states and DC, as well as in Canada and several European countries where pot is legal in one form or another.
The company offers an array of operational software and services and related hardware for marijuana dispensaries and retailers, growers, edibles producers and other ancillary companies. Its SaaS (software-as-a-service) platform includes point of sale, inventory tracking, manufacturing and cultivation management applications. They sell scales, labels and printers, credit card swipers and other accoutrements of the trade. "We're a one-stop shop for our clients' various business needs," Poinsett declared.
The boom in MJ Freeway's business helped attract an investment in January from Tao Capital Partners, a venture capital firm that pumped money into Tesla cars and space-travel company SpaceX. While the financial terms of the deal were not disclosed, the investment helps legitimize the cannabis industry.
MJ Freeway is capitalizing on what some consider to be one of the fastest-growing industries in the U.S. "We found that between 2013 and 2014, legal retail and wholesale cannabis sales grew from $1.5 billion to $2.7 billion, a 74 percent increase," said Troy Dayton, CEO of The ArcView Group, a cannabis industry investment and research firm based in Oakland, California.
Dayton predicts a 33 percent rise this year, to $3.5 billion. And that's just for legal weed alone. "Assuming that full legalization happens in the U.S. someday, we're looking at an industry about the size of the wine industry and larger than organic foods."
In the meantime, MJ Freeway CEO Poinsett and Billingsley, the company's COO, have focused on growing their business in states where marijuana is legal, facing a host of unusual challenges. "We found early on that there were some very unique needs and requirements for cannabis businesses and that we could provide services geared to this niche," Poinsett remarked.
Although they don't usually have to deal with the fact that marijuana remains a federally illegal Schedule 1 drug—in the same category as heroin, cocaine and LSD—there are strict state and local regulations to abide. For example, states have varying product-tracking, labeling, packaging and reporting rules, which have to be customized into MJ Freeway's software. "We actually have someone on our team who's dedicated to following state regulatory models," Poinsett said.
In general, however, every regulatory model requires some sort of "seed-to-sale" tracking of marijuana plants from cultivation to consumption, a technology for which MJ Freeway has created a patent-pending process. "It's important for regulators to understand where the plants are, how many there are, and who's growing them, and then be able to track the harvested product as it goes to the stores," Poinsett explained.

"We found early on that there were some very unique needs and requirements for cannabis businesses, and that we could provide services geared to this niche."

MJ Freeway offers clients three primary software packages that go well beyond just the plant itself: GrowTracker for cultivators and growers; MixTracker for infused-products manufacturers and processors; and GramTracker for dispensaries and retailers. The company also has introduced an app, MJ Mobile, for dispensaries.
On the services side, the company provides application services for new businesses, operational services for up-and-running businesses, and marketing services geared to businesses that are looking to expand. "We have everything from single owner-operators of small shops to some of the largest dispensaries in the country and the world using our software," Poinsett said.
The cannabis industry has grown exponentially in the five years MJ Freeway has been in business as legalization has expanded, but in the beginning, finding customers took a lot of legwork. "There was plenty of cold-calling and knocking on doors, trying to explain our concept, as well as pitching ourselves as being able to do it," she said. "Like any business owner, you have to start building your relationships from day one."
MJ Freeway's SaaS model means its software can be purchased on the website and accessed over the Internet by licensed marijuana businesses anywhere in the world, yet the complicated banking laws surrounding the industry can make transactions tricky. Because pot is illegal in the eyes of Uncle Sam, federal laws have prevented most banks from dealing with a cannabis company, fearing they could be prosecuted for money laundering. That keeps MJ Freeway's accounts receivable department inordinately busy dealing with clients unable to maintain a bank account.
"The banking issue is a terrible problem for our clients that needs to be fixed," Billingsley stated. "You don't need people driving around with large amounts of cash [they can't deposit in a bank] or carrying duffel bags of money into the department of revenue to pay their taxes," alluding to scenario that plague businesses. "These are legitimate businesses paying their taxes."

Legitimate or not, being in the cannabis business can carry a stigma. "At first we had challenges hiring people who were interested in the positions but not in working for a company involved in marijuana," recalled Poinsett, who moved to Denver a year and a half ago to open an office downtown. "Now we have people beating down our doors to come work for us."
The stigma, as well as legal ambiguity, has kept big-time IT players out of the industry, which is fine with Billingsley. "The truth is, as much as it's challenging at times, if there were not some murkiness surrounding the industry, we would not have had the opportunity we've had," she said. "A large software company would have swooped in and capitalized on this."
While MJ Freeway has a few similarly homegrown competitors, "we were the first and are the leader by a big order of magnitude," Poinsett said. "We have about four times as many clients as our closest competitor."
The owners of MJ Freeway declined to reveal its revenues beyond saying they've doubled every year and are expected to again in 2015, when the company expects to turn a profit. It currently has 26 employees, some working virtually, including Billingsley, who moved to Atlanta, where raising an 8-year-old daughter can be interesting when it comes to revealing Mom's occupation. "I have the opportunity quite often to drop the bomb about what I do."
One of those occasions was at Career Day at her daughter's school. "I thought it was Career Day like when we were kids," Billingsley said, figuring she'd talk about running a nondescript software company. It turned out to be like a trade show, with parents displaying wares from their businesses on tables in the cafeteria. "Our tech people made a totally vanilla version of our software to be used in a candy store."
Pot or not, MJ Freeway is in many ways like most any small business. "We face all the same challenges of funding, hiring, managing growth, paying attention to our market, and making sure our product is good," Poinsett said. "We have the additional factor of being in the cannabis industry, which can be fun to talk about when you go to a class reunion."
MJ Freeway get-togethers can be atypical, too. "Remember, we're a whole company of computer geeks," she admitted, "but if you can imagine the most fun computer geek office party you've ever seen, that's us."
~
Tags:
WeedWorthy Marijuana Legalization News, WeedWorthy High Tech News, WeedWorthy Finance News, WeedWorthy Cannabis Industry News Bob Woods
Review ~ The Big Picture with Kal Penn ~ Looks at ...
Historic Medical Marijuana Bill Gains Momentum