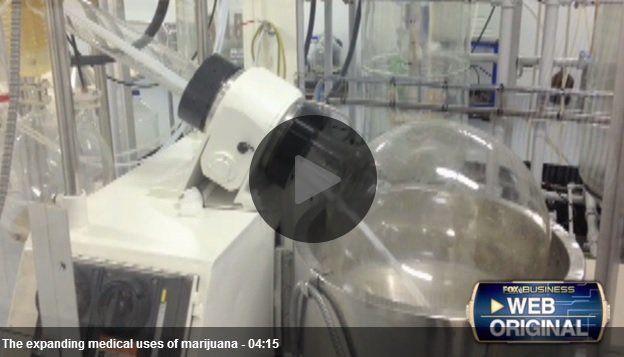 Seana Smith ~ Fox Business News
The U.S. market for legal cannabis is booming, bringing in $2.7 billion last year, according to The ArcView Group. That figure is a 74% jump from 2013.
~
AXIM Biotechnologies, a biotech company specializing in cannabinoid research and commercial hemp product development, hopes to cash in on the craze in a very unique and creative way. The New York and Netherlands-based firm manufactures several patent-pending products using cannabis for better health.
“We use unique cannabinoids, which are not psychotropic,” said George Anastassov, AXIM Biotechnologies CEO.  “When people talk about marijuana, they usually think about the psychotropic effects from THC. We utilize certain alkaloids that come from the cannabis plant that have beneficial effects to the human body.”
This week, AXIM unveiled a cannabinoid-based oral care line of toothpaste, mouthwash and dentifrice using its distinctive technique. It’s the first-to-market with products containing CBG, which Anastassov describes as the "pioneer cannabinoid," that came before THC and CBD. The products target the daily use market.
The company is also launching a cosmetics line, featuring baby powder, moisturizers, lotions, lip balm, shampoo, conditioner and body wash.
“They contain CBG, cannabigerol, and there isn’t another product on the market that contains this cannabinoid,” Anastassov said.  “Before we launch any product, we make sure it’s well protected. We don’t produce any product that can be repeated by anyone else.”
And it’s important for AXIM to trademark its products as the rapidly growing market is gaining a lot of participants. But the company is not too worried about the influx in one of the fastest growing industries in the U.S.
“We don’t have much competition,” Anastassov said.  “There are around 350 companies in the medical marijuana space, but when we speak about serious competition, there are not many companies out there who have products, intellectual properties and pipeline of products. We have a pipeline of products, we have a laundry list of intellectual properties and trademarks, and we’re very careful about how enter the market.”
But it’s not always easy for AXIM to produce new products due to varying regulations. Hemp products from the non-psychoactive part of the hemp plant are legal to import and sell in all 50 states, but growing hemp in the U.S. remains illegal.  Therefore, AXIM imports its products from overseas.
AXIM recently selected the coastal city of Almere, Netherlands for its future manufacturing facility headquarters. The new industrial hemp plant will be capable of producing more than 25,000 products focusing on innovations in health and the environment.
So what does the future hold for this innovative company?  AXIM is focused on finding solutions for conditions for which there is currently no effective treatment.
“The next line we plan to launch are ophthalmological products,” Anastassov said. “Glaucoma has rendered 200,000 people blind in the United States, and for the last 20 years, there hasn’t been anything new.  It’s well known that CBG is an excellent reducer of high eye pressure so we’re working on solutions for this condition.”
In addition to treatments for Glaucoma, AXIM has numerous other products in the pipeline, according to Anastassov.
“We’re here to stay,” Anastassov said.  “We have a solid pipeline of products coming to the consumer at large.”
See the video interview here; http://www.foxbusiness.com/industries/2015/02/27/hemp-biotech-company-launching-oral-care-line/
~
Tags:
Cannabis Legaliazation, WeedWorthy Marijuana Legalization News, WeedWorthy Science News, Medical cannabis, Seana Smith,
Learn about growing world-class cannabis from 9 wo...
The laws on alcohol and marijuana are totally out ...

CBN Is Another Cannabis Compound With Beneficial Properties - Cannabis News

How much pot in that brownie? Chocolate can throw off tests - Cannabis News