Hot off the press cannabis, marijuana, cbd and hemp news from around the world on the WeedLife News Network.
4 minutes reading time (811 words) 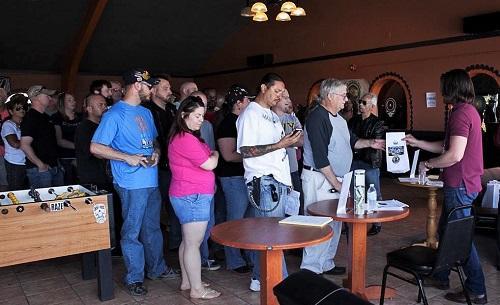 On Wednesday November 11, Remembrance Day in Canada and Veterans Day in the U.S., American military veterans from the Weed For Warriors Project will end their national awareness tour by emptying bags of empty pill bottles at the gates of the White House.

The organization says their demonstration is meant to raise awareness of the veterans who have been “over-medicated with poisonous pharmaceuticals and unjustly deprived of their effective, non-toxic natural medicine of choice.”

The event is just part of a growing movement by veterans -- who are demanding they be allowed access to cannabis as part of their medical treatment for injuries suffered during their military service; including Post Traumatic Stress Disorder (PTSD).

“We hope to convince veterans that what we need to do is band together like we did when we were in the service,” says Roger Martin, founder and executive director of Colorado-based Grow for Vets, a group that distributes free cannabis to veterans. “We need to be a cohesive unit if we expect to affect change. Something has to happen and it has to happen soon.”

Many veterans are saying the current approach by the Veterans Administration (VA) and the mainstream medical community, of prescribing pharmaceutical anti-depressants and painkillers to veterans with physical and mental health issues, has failed and is instead creating more physical, mental and emotional issues for vets.

The VA, in a 2012 report, said about 22 veterans are dying each day from suicide.  But according to Grow for Vets’ Martin, that number doesn’t represent the true death toll.

“The number I use is more than 50 American heroes die every day between prescription drug overdose and suicide,” he tells WeedWorthy. “And most of the guys and gals who kill themselves do so because they’re taking 20, 25 drugs a day and they’re so damned depressed they just give up.”

For its part, the VA has acknowledged that some veterans may be using marijuana to relieve their PTSD symptoms. But it also says there is “no evidence at this time that marijuana is an effective treatment for PTSD.”

Attempts at scientific research regarding the treatment of PTSD with cannabis have run into bureaucratic obstacles. Last year Dr. Sue Sisley, who was seeking federal approval to study the effectiveness of cannabis in treating military veterans with PTSD, was fired from her research position at the University of Arizona.

While the school cited organization and funding issues, Dr. Sisley had other ideas as to why her studies were halted.

“They could never get comfortable with the idea of this controversial, high-profile research happening on campus,” she told the New York Times.

Dr. Sisley is now working with the California-based Multidisciplinary Association for Psychedelic Studies (MAPS), a non-profit research and educational organization; which is working with her, as well as researchers at Johns Hopkins and the University of Pennsylvania, in an attempt to establish its own trials for the study of cannabis as an effective treatment of PTSD in veterans.

The study’s primary goals, according to Brad Burge, the director of communications and marketing for MAPS, is to gather “sound scientific evidence” as to which strains of cannabis might the most effective to treat the symptoms of PTSD in veterans, “specifically which ratios of THC and CBD are most effective for reducing symptoms of PTSD such as nightmares, insomnia, and acute anxiety.”

Burge tells WeedWorthy that, if the results show promise,  “we hope that this trial leads to additional research that could ultimately result in U.S. Food and Drug Administration (FDA) approval for smoked, whole plant marijuana as a prescription treatment for PTSD,” which would in turn provide doctors with the information needed on what cannabis strains work best for that treatment.”

Some veterans involved in the push towards access to cannabis say they are facing negative public opinion and being criticized as stoners who are simply looking to get high.

“Just because you can’t see my pain doesn’t mean it doesn’t exist,” says Tanganyika. She’s a Marine Corps veteran who served two tours in Iraq, is part of the Weed for Warriors Project and who is also the CEO and founder the California-based Jayn Grene brand of cannabis-infused skin care products.

“You insult me to say that my struggles aren’t real and that cannabis is not helping me,” she tells WeedWorthy.

“The majority of us have tried the pharmaceutical route for years and failed,” says Fabian Henry, a former combat engineer in the Canadian military and founder of the New Brunswick-based Marijuana For Trauma Inc.

“And the only medication giving us relief from our symptoms has been cannabis,” he adds. “And if cannabis is one thing that gives (veterans) the relief, then let’s let go of the stigma and allow them to use this as medicine. We’re not just trying to get high; we just want to feel normal again.”

Tribe's recreational, medicinal marijuana operatio...
3 States That Are Most Likely to Legalize Recreati...