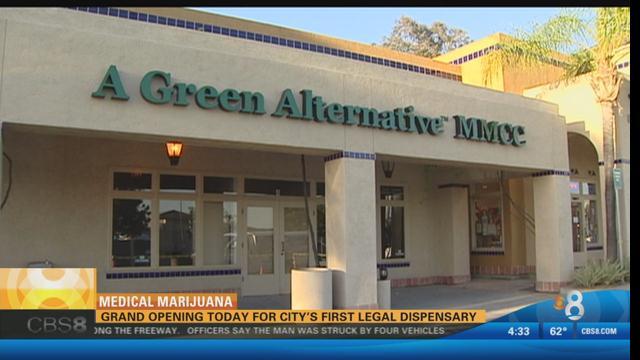 ~
A Green Alternative, which had a soft opening Wednesday, is starting business about a year after the City Council approved regulations under which collectives can operate legally.
See the video here: http://bit.ly/1BfcumB
The shop, located in a strip mall in Otay Mesa near the Brown Field airport, is owned by David Blair, who teaches business at San Diego State University. He was given the final go-ahead in January by the city's Planning Commission, which unanimously rejected an appeal by a drug abuse prevention advocate.
Commissioner Susan Peerson said A Green Alternative "meets and exceeds" the requirements of its conditional use permit.
Blair and his representatives told the commissioners that they have hired a security firm to provide guards at all times for the facility. They also said the nearest neighborhood is 4.9 miles away and the nearest residence, which is just under 2 miles away, is a prison.
Opponents contended that the dispensary was being sited in an area with businesses patronized by families with children.
The city's regulations require prospective dispensary owners to go through a lengthy permit application process. They also specify zoning and distances to keep the operations away from residences, schools, churches and the like.
In the case of A Green Alternative, the neighborhood is zoned "heavy commercial" and includes a fast-food restaurant, a filling station and a warehouse.
The rules set by the City Council will allow up to four legal marijuana dispensaries per council district within city limits.
The Planning Commission recently denied appeals against three other dispensaries, which would be located in Kearny Mesa, the Midway District and San Ysidro.
~
ResponsibleOhio's marijuana-legalization effort cl...
Meet the man trying to halt marijuana legalization

WeedPons.com Prepares for Another Rush of Online Holiday Deal Shoppers

The WeedLife Network, as part of its information-sharing mission, announces a cannabis news partnership with Canada’s 420 Intel web site