From 'cash teams' to security, marijuana business gets serious 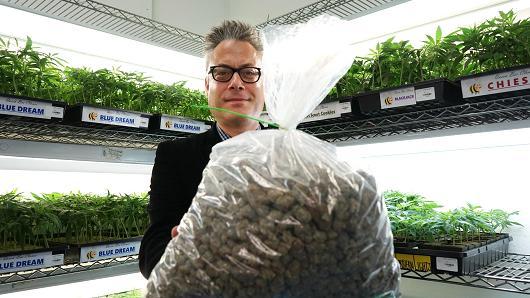 ~
More than a year after Colorado became the first state to allow recreational cannabis sales, the marijuana industry is growing and evolving further. Entrants—often with loads of cash and product on hand—are taking cues from the gambling industry, which knows a lot about managing bricks of money.
"About 70 percent of our transactions are cash, the other 30 percent are debit and ATMs and so you can do the math and see that we have a fair amount of cash that we have to manage and handle," says Andrew DeAngelo, a cannabis entrepreneur based in the San Francisco area. "Our money is counted at least half a dozen times from drawer to armored car, by at least four different staff members or managers along the way," he said.
Even before legalization, most marijuana purchases were cash-based, and the legal era is no different. The industry also uses armored cars and "cash teams" that count money again and again.
Cannabis is still illegal according to federal law. But legalized recreational use in select states has allowed the burgeoning industry to explode with new companies, new business models and more tax dollars rolling in.
The legal cannabis industry hit $2.7 billion in 2014, and is forecast to soar to $4.3 billion in 2016, according to the ArcView Group, a marijuana industry research and investment company.

Inside a 'cash team'

DeAngelo is director of operations at Harborside Health Center, a medicinal marijuana cooperative that screens and sell product from local growers, and has two locations in Oakland and San Jose. He has been in business with his brother Steve DeAngelo for nearly a decade.
California's medicinal marijuana law passed in 1996 that requires medicinal cooperatives to operate as registered nonprofits as they register sales in the state.
Harborside also has 180,000 patients and did $30 million in gross sales last year—which means a lot of cash on hand.
To keep track of the money, the company has employed business tactics from the gambling industry including the hiring of a "cash team."
Casinos "are the best at handling cash," DeAngelo said. "So you have to have double counts and every time the cash moves in the building from one location to another, it's counted again."
The cash team conducts daily audits on the money, and then more extensive audits weekly and/or monthly depending on the business flow. From cashier drawer to armored car, the money is counted at least half a dozen times, DeAngelo said, they try not to have more than $10,000 in the building at any given time.
Then there are the security cameras. The cooperative uses more than 40 security cameras and metal detectors outside of the building, as well as high tech scanners that require finger prints before doors open.
Armed cars also change routes and pickup and delivery times daily.

Despite the large amounts of cash on hand, the DeAngelos do have two banking partners to help manage the growing business. This is rare, as few financial institutions are running to do business with cannabis entrepreneurs, at least for now. While not disclosing names, one of their banks is a small credit union and the other is a mid-sized bank.
Andrew DeAngelo says staying transparent goes a long way toward attracting and keeping banking partners happy. "We're transparent with our books, we let them tour our facility," he said.
Currently Colorado, Oregon, Washington and Alaska allow legal adult use of cannabis. Washington, D.C. has legalized adult marijuana use, but not sales. Additionally, 19 states have decriminalized small amounts of marijuana, and 23 states, Washington, D.C. and Guam allow for medicinal marijuana usage, according to the National Conference of State Legislatures.
~
Tags:
WeedWorthy Marijuana Legalization News, WeedWorthy Finance News, WeedWorthy Cannabis Industry News ArcView Group, Harborside Health Center, Kate Rogers, Andrew DeAngelo, legal cannabis industry,
The little girl behind $37m donation for medicinal...
Ohio marijuana legalization report touts job creat...