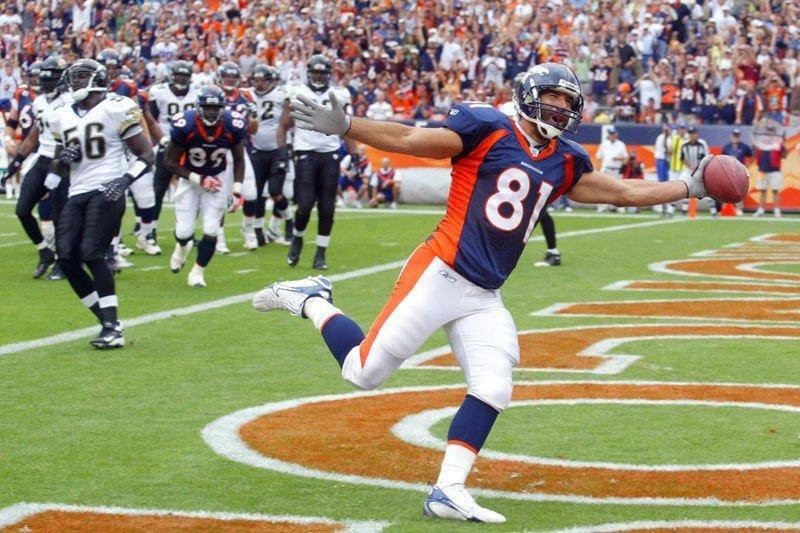 Fox Sports ~ NFL
DENVER (AP) Former Broncos tight end Nate Jackson says he believes the NFL will have no choice but to remove marijuana from its lists of banned substances in the near future.

~
Speaking at a marijuana business conference, Jackson called on the league to allow medical marijuana as a means to help players deal with the physical and psychological pain and head injuries inherent to their profession.
Jackson said he avoided opiate painkillers as much as he could during his six-year career from 2003-08. Instead, he self-medicated with marijuana so that he wouldn't retire addicted to prescription drugs like so many of his contemporaries, he said.
''It kept my brain clean,'' Jackson said Wednesday during the Cannabis Business Executives Breakfast that kicked off a three-day conference titled ''Sports, Meds and Money.''
''I feel like I exited the game with my mind intact. And I credit that to marijuana in a lot of ways and not getting hooked on these pain pills that are recklessly distributed in the league when a guy gets an injury,'' Jackson said.
He said he believes most NFL players use marijuana - they're only tested for street drugs once a year whereas random tests for steroids are conducted year-round - and that the league knows this.
''They're aware that probably over half of their players smoke weed. They've been doing it since they were teenagers. The fact that they've been doing it that whole time and still made it to the NFL and are able to satisfy the demands of very, very strict employers on a daily basis means that their marijuana use is in check,'' Jackson said. ''Marijuana is not a problem in their lives.''
The real danger is that they're ''smashing their skulls over and over and over again,'' he said. ''And as long as we as fans or the media love this game and want this game to continue and want our players to play hard, we have to open up our minds and be a little bit more compassionate about how we approach their health care.''
That's why Jackson said he believes the league, beleaguered by a domestic abuse saga last year, is ''going to get behind this movement'' to de-stigmatize the use of marijuana and allow players to use it without penalty.
''One, it's a good public relations move for the NFL to do this because they have a lot of former players who are hurting, who have a lot of cognitive issues, who have orthopedic issues, who have psychological problems and it seems that marijuana helps with all of these things,'' Jackson said. ''So, the NFL has taken some PR hits in the last year over a few things, and I think they'll be eager to get behind something like this.''
League spokesman Greg Aiello told The Associated Press on Wednesday: ''At this time, the medical advisers to our drug program tell us that there is no need for medical marijuana to be prescribed to an NFL player.''
When residents of Colorado and Washington voted to allow recreational marijuana the players union sent out a memo to remind all players that ''it's illegal and prohibited under our policy.''
The league said it's used ''experts on substance abuse disorders and addiction and we ask them to make recommendations and to date they haven't recommended any change.'' It also said there's ''other medications doctors can use for effective treatment of pain.''
Lastly, the NFL says that ''if the science shows it and there is a rigorous process in place to determine that the only drug that could help is medical marijuana, then we would consider allowing it in necessary cases.''
''That's the most promising of those bullet points for sure,'' Jackson said after his keynote address and panel discussion.
''I don't ever think the league will come out with like a marijuana banner. They're never going to say, `Hey, marijuana, it's great for everyone!' But I think what they will do is remove it from the banned substances list and stop punishing people for it,'' Jackson said. ''It actually keeps it in the news more when it is a banned substance than if it weren't.
''Josh Gordon's in the news for weed. These other guys are in the news for weed. That wouldn't happen anymore.''
Jackson said he never used marijuana before games or practices and knows of nobody who did. But, he said it helped him recover afterward and it didn't adversely affect his performance. In fact, he said, it helped him hone his craft because he would visualize successful play while high ''and that carried over to when I was sober.''
''I consider it a performance-inspiring drug,'' Jackson said.
He said he could see how it could help runners, bicyclists, golfers and other athletes who aren't getting attacked by 11 defenders.
''Michael Phelps is the best swimmer that the Earth has ever produced by far. And he smokes weed,'' Jackson said. ''That should tell us something.''
~
Tags:
WeedWorthy Marijuana Legalization News, WeedWorthy Sports News, Denver Broncos, Nate Jackson,
Sen. Cory Gardner backs bill legalizing industrial...
UN drugs body warns US states and Uruguay over can...