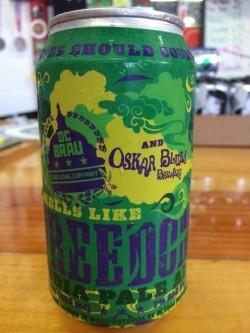 ~
They're paying homage to Initiative 71, which legalized marijuana in D.C., with a marijuana-inspired IPA called Smells Like Freedom. While it doesn't contain any actual weed, it does smell like it, and it will be released tonight at Meridian Pint at 5 p.m.
The two breweries have been looking to work together for years since first meeting at the Craft Brewers Conference in D.C. They came up with the idea for Smells Like Freedom before the November election that legalized recreational marijuana in D.C. "We were like, 'Hey, this is something that we're about to have in common with Colorado in addition to beer culture,'" says DC Brau co-founder Brandon Skall.
After the election, when certain members of Congress tried to put an end to  the legalization of pot in D.C., DC Brau and Oskar Blues decided to use the beer as an opportunity to remind/educate people about D.C.'s struggle for autonomy. The top of the cans read "votes should count."
"When 70 percent of a voting public steps up and says they want something, and Congress steps in to say that they're going to deny that, I think that should be a big eye-opener for a lot of people about what we deal with all the time related to statehood issues and home rule issues," says Skall. (Technically, Initiative 71 passed with 65 percent of the vote.) DC Brau has been vocal about D.C. statehood since its inception and prints statehood facts on all of its cans.
Smells Like Freedom was brewed in both D.C. and Colorado. The 7 percent alcohol IPA has notes of “resiny, piney, earthy, sticky cannabis and white pepper with aromas of cannabis, tangerine, and sugar-coated ruby red grapefruit." Skall says that making a beer that smells like marijuana wasn't hard given that cannabis and hops are so closely related. "Literally, they're like cousins," he says. "A lot of times if you smell fresh hops, it's just a very similar smell."
There are only 120 barrels of Smells Like Freedom, and Skall expects it to go fast. Cans of the beer will be available exclusively in D.C., but you'll find it on draft at bars and restaurants where DC Brau is usually available.
Despite what you might assume, Skall says there was not a lot of pot smoking involved in the making of the beer. "When we have our work hat on, we have our work hat on," he says.
~
Tags:
Legalizing Marijuana in Washington DC, WeedWorthy Marijuana Legalization News, WeedWorthy Culture & Arts News, Jessica Sidman,
These Five States Could Legalize Marijuana in 2016
Rhode Island - Most Medical Marijuana Patients Sub...