Hot off the press cannabis, marijuana, cbd and hemp news from around the world on the WeedLife News Network.
1 minute reading time (160 words) 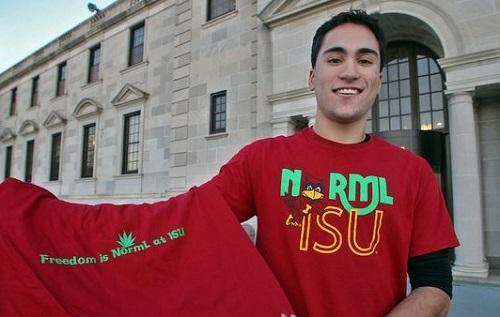 In a 45-page ruling, the U.S. District Court for the Southern District of Iowa permanently barred ISU from enforcing the university's trademark licensing policies in a discriminatory manner against the campus chapter of the National Organization for the Reform of Marijuana Laws.

The court specifically blocked ISU "from further prohibiting plaintiffs from producing licensed apparel on the basis that their designs include the image of a similar cannabis leaf."

Students Erin Furleigh and Paul Gerlich, both former presidents of the NORML chapter at ISU, sued the university in July 2014 after officials rejected the student group's already approved T-shirt design — which included a marijuana leaf over the words "Freedom is NormL at ISU."

What Would the Marijuana Market Look Like Under a ...
Kevin Smith Rolls Out ‘Hollyweed’ Pot Comedy Proje...