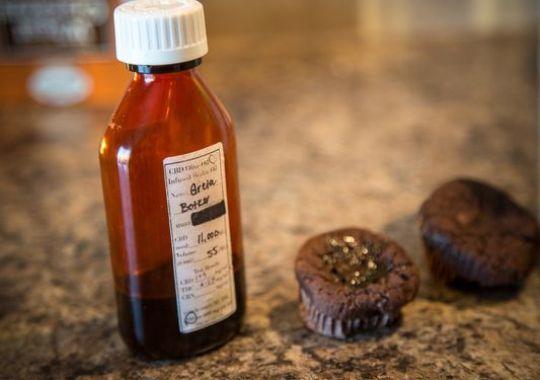 Dave Boucher ~ The Tennessean ~
NASHVILLE — It's now legal to use cannabis oil for limited medical purposes in Tennessee.

~
And the Mathes family is ready. The East Tennessee family already had the oil and a recommendation from a doctor before Monday. Their 1-year-old daughter, Josie, still has the seizures that have plagued her short life.
They just needed Gov. Bill Haslam to give final approval to arguably Tennessee's first broader step toward legalizing a marijuana product for medicinal use.
That moment came Monday, when, as expected, Haslam signed a law that legalized the controversial medical measure.
"We're very, very happy that we can get started and see some improvements and get the nasty medicines behind us," Josie's mother, Stacie Mathes, said Monday afternoon.
The Matheses started giving Josie the cannabis oil as soon as they got the word the bill was signed. There's no guarantee it works, and even if it does it will take time. But the new law provides hope.
"As parents, you want some miracles. And you know in some cases it will stop seizures pretty quick," Stacie Mathes said.
"We're hopeful that we can get them under control. ... We're happy with that."
The new law allows patients who suffer from seizures or epilepsy and received a recommendation from a doctor to use cannabis oil. The law takes effect immediately.
"I'm going to trust people like John Dreyzehner, our commissioner (of the Tennessee Department of Health), in terms of the fears that he has around medical marijuana and some of the issues there versus cannabis oil, which he feels like can help some people in very specific situations," Haslam told reporters in Franklin after confirming he signed the bill Monday morning.
Advocates point to studies and patients in other states who have responded positively from the use of cannabis oil. The product has helped some patients suffering from hundreds of seizures a day where other medications have failed.
The bill doesn't allow people to purchase the oil made in Tennessee, but Stacie Mathes said she got her oil from Colorado, one of 23 states where some form of medical marijuana is legal. She said she knows other Tennessee parents are looking to possibly get oil from California as well.
Josie suffers from infantile seizures and has not responded as well as hoped to other medications the Matheses have used in the past. Stacie Mathes said Josie takes more than 30 milliliters of medication every day, combating the seizures to a point but leaving behind the shell of a child.
"She's been in a funk. She's been doped up with these medications, so if she can come to life, she has a much better chance of developing," Stacie Mathes said.
"Even if we get that much, that's huge. She has way more of a chance."
With the cannabis oil, Josie will need to take 0.14 milliliters given to her orally three times a day. She won't be able to stop taking the other medications right away; because of the strengths of the medication, Stacie Mathes said it may take up to a year to wean Josie off the medications to avoid painful withdrawal symptoms.
The new law is limited in nature. Haslam and other supporters argue it's not the first step toward legalizing marijuana for recreation use, but there is certainly a push in Tennessee toward a broader legalization of medical marijuana.
GOP state Sen. Steve Dickerson of Nashville and GOP state Rep. Ryan Williams of Cookeville introduced a bill late in the legislative session this year that would have allowed the usage of medical marijuana in more cases. The bill established a process for growing, processing, distributing and regulating marijuana for some medicinal purposes.
There were limitations to the bill — it didn't allow smoking marijuana for any reason — and medical marijuana advocates said in some parts the bill went too far. For instance, anyone who wanted to use medicinal marijuana had to surrender his or her driver's license. But this year, the bill was discussed more than the Democrats' perennial push for medical marijuana and is set for at least some further discussion among lawmakers over the summer.
~
Tags:
WeedWorthy Marijuana Legalization News, WeedWorthy Medical Marijuana News, Dave Boucher, Marijuana Legalization in Tennesse, Gov. Bill Haslam,
State says medical pot businesses may soon start o...
Colorado lawmakers approve medical marijuana for s...