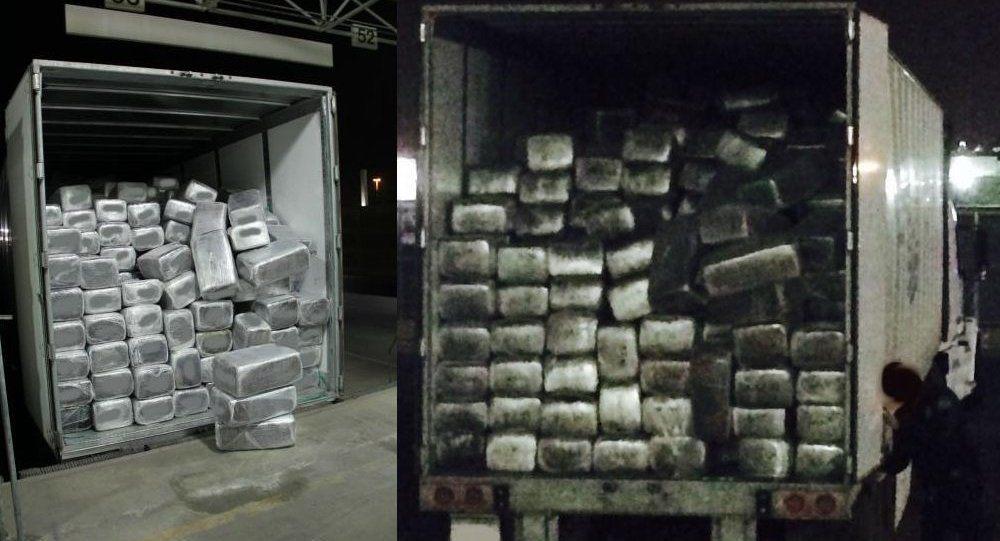 Sputnik International
US Customs and Border Protection seized 15 tons of marijuana in a record-setting seizure. The marijuana was poorly hidden in a cargo shipment of mattresses.

~
The bust represents the largest seizure at that busy port and is the second largest seizure at any border crossing in history.
According to CBP, an officer was conducting a route check had the truck scanned by x-ray. Upon seeing an anomaly, the officer opened the back door of a truck in a routine check and were greeted by floor-to-ceiling, tightly-packed stacks of blocks of the illegal drug.
There were a few mattresses in the track stacked towards the front.
Officers counted 1,296 packages, containing about 31,598 pounds of marijuana. They calculated the street value at approximately $18.96 million.
The driver of the truck, a 46-year-old male Mexican citizen, held a valid border crossing card which was immediately canceled. He was then handed over to the US Immigration and Customs Enforcement Homeland Security Investigations and booked at the Metropolitan Correctional Center. CBP also seized the truck.
“I am extremely proud of the work my officers do.  Officers never give up their enforcement posture and demonstrate each and every day that they remain guardians of our nation,” said Otay Mesa Cargo Port Director Rosa Hernandez.
This seizure is only eclipsed by one in 2013 in which 35,265 pounds of marijuana was seized at the Calexico East port of entry in 2013.
~
Tags:
Weed Worthy Law & Crime News,
63% of Republican Millennials favor marijuana lega...
Learn about growing world-class cannabis from 9 wo...

Marijuana is legal in Massachusetts, but not off its shores - Cannabis News