A majority favors marijuana legalization for first time, according to American authoritative survey 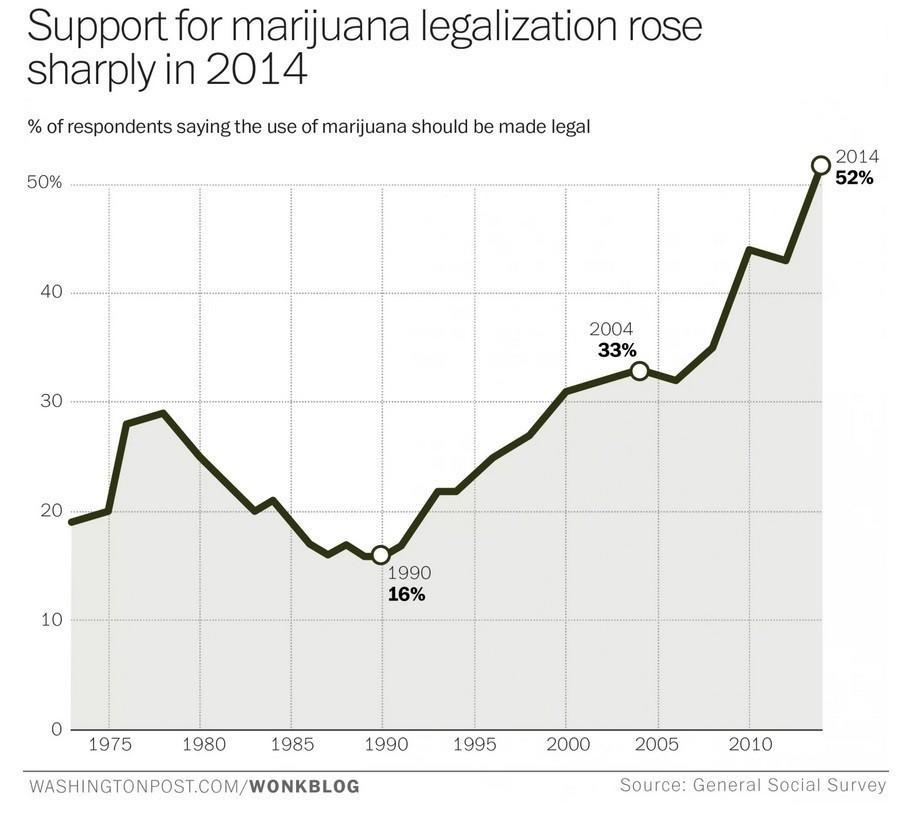 Christopher Ingraham ~ The Washington Post
For the first time, the General Social Survey - a large, national survey conducted every two years and widely considered to represent the gold standard for public opinion research - shows a majority of Americans favoring the legalization of marijuana.

~
In interviews conducted between March and October of last year - when the legal marijuana markets in Colorado and Washington were ramping up - researchers asked 1,687 respondents the following question: "Do you think the use of marijuana should be made legal or not?"
Fifty-two percent said pot should be legalized, 42 percent opposed it, and another 7 percent were undecided. Support is up 9 percentage points from 2012, the last time the survey was conducted.
The GSS marijuana numbers trace the trajectory of U.S. drug policy over the past 40 years. In 1974, a year after the Shafer Commission recommended removing marijuana from Schedule 1 of the Controlled Substances Act, public support for full legalization stood at 19 percent. Support rose through the 1970s, reaching nearly 30 percent in 1978, only to plummet during the Reagan years, "Just Say No" and the advent of the drug war.
The year 1990 represented the nadir of legalization support, when it stood at 16 percent. But the numbers rose steadily through the 1990s as states began adopting medical marijuana laws, starting with California in 1996. As recently as 2006, support stood only at 32 percent - just a little bit higher than the previous peak in 1978. In the fewer than 10 years since then, support has jumped 20 percentage points - mirroring, in many ways, the dramatic shift in public opinion on gay marriage over the same period.
Legalization supporters have been able to capitalize on that energy and secure full legalization in four states, with a partial legal status in DC similar to the Schafer Commission's original recommendation. Opponents have scrambled to catch up, but the sharp and sustained increase in public opinion means they're facing an uphill battle. That fact that they've been drastically outspent at every turn - partially a reflection of greater public support for the pro-legalization camp - hasn't helped things.
Still, after repeated losses at the ballot box legalization opponents are now turning toward the courts. The attorneys general of Nebraska and Oklahoma have filed suit against Colorado. Former DEA administrators and a DC-based tough-on-crime group advocating for harsher prison sentences have also rallied to the cause. Additional state-level lawsuits may be coming soon.
For a public increasingly weary of the toll of decades of costly and ineffective drug policies, these cases will be a tough sell. Younger Americans - including Republican ones - overwhelmingly favor marijuana legalization. And after a year of legal pot, Colorado doesn't appear to be experiencing buyer's remorse. A recent Quinnipiac poll found that 58 percent of Colorado's voters said they supported the state's marijuana law -- slightly more than the 55 percent who approved it in 2012.
The strong numbers in the latest General Social Survey indicate that the issue isn't losing salience with the public. At the national level, support for legal marijuana remains robust -- and doesn't show signs of wavering any time soon.
Christopher Ingraham writes about politics, drug policy and all things data. He previously worked at the Brookings Institution and the Pew Research Center.
~
Tags:
WeedWorthy Marijuana Legalization News, WeedWorthy Political News, Christopher Ingraham, WeedWorthy Top Stories,
Texas Republican Mounts Pro-Marijuana Campaign, Bi...
Mitch McConnell has a Love Affair with Hemp

What's next for the legal cannabis sector?